I’m a happily married baby boomer in his mid-50s, increasingly mindful that my time is continually ticking past. I’ve been starting to think… midlife crisis?

But, no, I don’t have an inexplicable wish to buy a sports car or go on a crash diet. However, I do feel in need a travel fix!

I have several outback destinations I’d like to mark off my bucket list – including the vast, remote interior of Australia such as Kakadu in the NT, the Kimberley in WA, and the Flinders Ranges in SA. 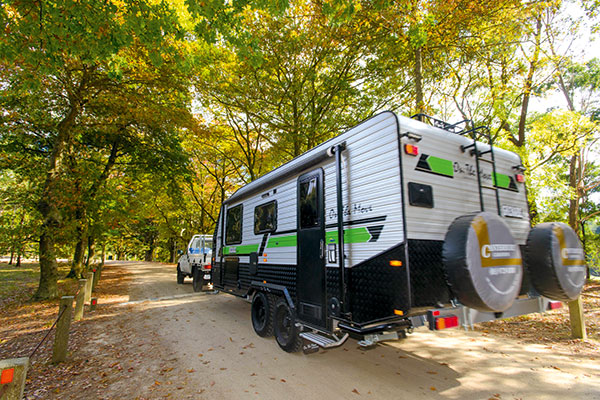 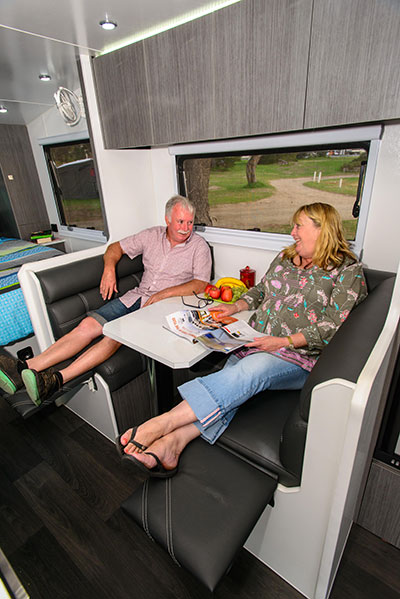 Obviously, I’ll need an offroad caravan that not only talks the talk but walks the walk. And I reckon I might have found a suitable candidate!

My wife Meredyth and I extended our Easter break and were fortunate enough to enjoy a few days on the Mornington Peninsula, Vic, with an On the Move Grenade Series II in tow. We collected the van from Colin, Ian and the friendly team at Canterbury Caravans in Bayswater – OTM’s sole Victorian dealership.

OTM is a leader in the offroad caravan genre, and the Grenade Series II is its flagship.

In 2014, the Grenade Series II – laden with the then-latest gadgetry – won CW’s Best Aussie Vans $80K-plus category. It was loaded with bling and substance – and even a shoe compartment on each side of the bed!

At the time, the judges commented, “there’s so many clever components to this van that it’s hard not to like it” and “this van has such a comprehensive, all-encompassing level of gear it is quite amazing”.

It’s the same scenario today, except the similarly impressive 2017 edition has undergone a couple of cosmetic changes from its predecessor that took out the BAV gong. These include deleting the auto steady stabilising legs and adding a gas heater as an upgrade. Three years on from its BAV award, it’s still one of OTM’s most popular models.

The latest Grenade Series II explodes with external features and is a credit to the workmanship of Lennie Mifsud and his staff.

Up front, it has a sturdy front stoneguard in front of two 9kg gas cylinders, while two spare wheels are fitted to the four-arm rear bumper bar. There’s also an electric pull-out step, reversing camera and a front light bar.

But it’s the interior that might really blow you away, with Jennifer Mifsud’s interior design experience and expertise really coming to the fore.

I appreciated the attention to detail, such as the arthritic-friendly ‘hidden’ locks and catches, plus the comfort and relaxation provided by the modish black leather-upholstered cafe dinette with footrests. Meanwhile, we loved the convenience of having top-loading washing machine on tour, and the fully-equipped kitchen that includes a fan-forced oven, 218L compressor fridge, pull-out pantry and swish splashback would be a dream to use on the road. It also has a plush rear ensuite with porcelain toilet, vanity basin and impressive storage capacity, and a lavish front bedroom. We slept like babies during our stay, courtesy of the caravan-queen-size bed with pillowtop mattress and orthopaedic frame.

Our hit-and-run itinerary included breakfast at Seawinds Gardens at Arthurs Seat where the sweeping views of Port Phillip Bay and the Mornington and Bellarine peninsulas are out of this world. Later that morning we took a leisurely stroll along the beach and foreshore at Capel Sound – a popular camping area.

The following day, we tackled several dirt roads within the peninsula’s hinterland. This was docile territory for the offroad-ready Grenade, but it’s versatile.

It’s a big beast, tipping the scales at 2898kg Tare (with a whopping 602kg payload), but it handles extremely well for its size. Our Toyota LC79 effortlessly hauled it up some steep inclines.

All too soon, our test came to an end and I longed for a lot more time touring this picturesque region with the Grenade Series II. I recommend Flinders, Red Hill and Sorrento, renowned for their gourmet delights and galleries, if you ever travel through this area.

So, some of my discarded travel dreams are back on the agenda. Give me the outback for a few months in this van, purpose-built for offroad adventure, and reflective of Lennie Mifsud’s insistence that he tests what he builds.