I rendezvoused with CW photographer Stu Grant at the quaint township of Yea before the 70km leg to picturesque Bonnie Doon – gateway to Mt Buller and Victoria’s High Country – where we set up base camp on the banks of legendary Lake Eildon.

Jayco has taken the bull by the horns with its Adventurer, and purpose-built it for exploring rugged conditions and equipped it for extended travel. 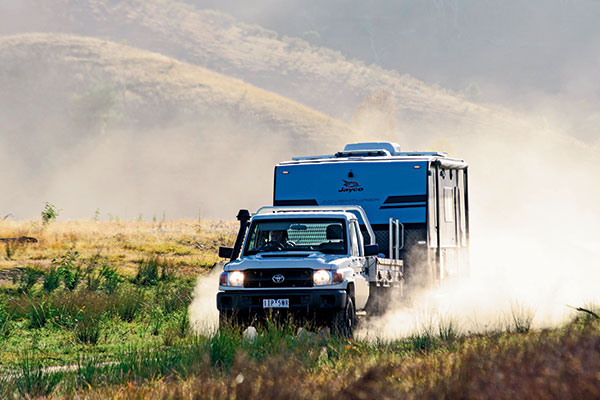 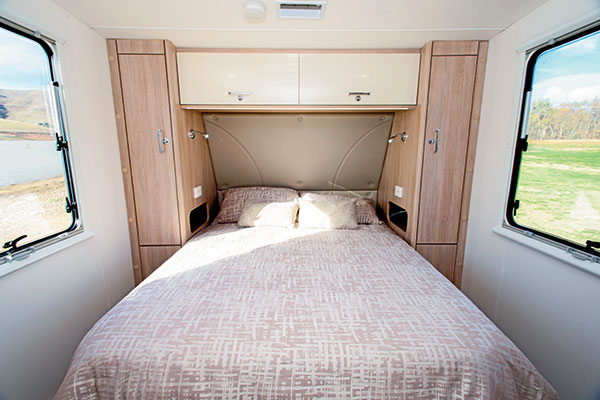 “We had not entered this market in the past, but have successfully built semi-offroad units (Outback) for many years,” Jones said.

“We wanted to have the product right prior to launching and we believe our new offroad unit will be exactly what the market needs as it’s full of features, highly capable and great value.”

Production versions of the Adventurer are expected to go on sale to the general public in August this year.

Jayco’s top-line ethos with the Adventurer will certainly appeal to the discerning caravanner who wants to tackle the rough stuff in true comfort and style.

The Adventurer sports a fibreglass (Jayco Tough Frame) frame, but it’s the grey fibreglass cladding complemented by black checkerplate front, back and sides that give it the look of a genuine offroad brute.

But things get even more interesting once you take a squiz underneath the van. It comprises a 6in hot-dipped galvanised chassis and fully redeveloped JTECH suspension, which is the product of two years’ new research and development at Jayco’s Melbourne headquarters.

The independent coil suspension replaces beam axles with individual stub axles, allowing each wheel to react independently to the road’s surface. Jayco says the addition of a second shock absorber improves the durability, as well as ride and handling, making it better suited for travelling in harsher environments.

Jayco really hasn’t missed a trick with the Adventurer’s versatile external attributes. It’s ideal for lengthy stays off-grid while also performing well as a comfortable tourer and even an entertainer. You could take it to faraway places and stay there for days, courtesy of its capacious battery (2x100Ah), solar (2x150W) and water (3x82L fresh; 1x75L grey) storage, while the exterior shower, slide-out stainless steel kitchen with provision for a Weber, plus an entertainment unit make life outside more fun and comfortable. The external kitchen is a great addition to this van, with self-supportive heavy duty slides, a utility drawer for cutlery and cooking utensils and a sink with hot/cold water.

A stone shield wasn’t fitted to Caravan World’s test van, but Jayco assures me that it will be a standard inclusion on the Adventurer. Meanwhile, a full-width tunnel boot increases the external storage.

It would be remiss of me not to mention the attention to protection on this van – including side brush guards and rear departure angle to aid clearance over offroad angles. It also has a single reversing camera, LED worklight and two spare wheels at the rear.

The inside of the Adventurer, with its timber-look doors, showed an impressive level of attention to detail. All the cupboard doors and drawers have positive locks, soft-close fixings and heavy-duty runners.

A good night’s rest is pretty much guaranteed in the front bedroom, as the caravan-queen-sized bed comes with a premium innerspring mattress and orthopaedic slats. I certainly had no complaints after my stay in the Adventurer. There’s also abundant storage, so much so you wouldn’t have any trouble taking all your home attire for a long-term trip away.

The bathroom contains a modish vanity, including a porcelain bowl basin with a fountain tap. There’s also a Thetford ceramic bowl toilet with swivel seat and a cleverly concealed Sphere 3kg top-loading washing machine, which I reckon is not only a luxury but also a necessity when off the beaten track.

But the show-stealer is the enclosed modern design shower with exhaust. It features high-grade acrylic surrounds with a sliding glass shower door, which is a real space-saver. To be honest with you, I’d jump at the chance to replace my flimsy shower recess at home with this Jayco version.

After a couple of days inspecting, photographing, videoing and just enjoying the Jayco Adventurer, we unhitched and took the soft option on camp cooking, crossing bridge in pursuit of some pub grub at the Bonnie Doon Hotel.

And what sumptuous meals; I had an Asian-inspired salt and pepper squid stack which would have blown Darryl Kerrigan’s mind, while Stu settled for a chicken parma which overlapped the plate! As it turned out, our eyes were too big for our stomachs.

We hit some trying tracks that day but didn’t push the Adventurer (hitched to a Toyota LC79 Series) to the absolute limit. It comfortably took us to out-of-the-way destinations and revealed how easily it could handle the rugged terrain within the Mansfield Shire, and that’s the appeal of the Adventurer, I think.

The Jayco Adventurer is just not a caravan; it’s a home-away-from-home. And I reckon even Darryl Kerrigan would have agreed that a man’s offroad caravan should be his castle!

Okay, it’s a $90K-plus van tipping the scales at a hefty 3500kg ATM, but it has all the bells and whistles and you do get what you pay for!

Undoubtedly, the Adventurer is born and bred for hitting the road less travelled.

I can hardly wait to return to the serenity of Bonnie Doon. And there’d be no complaints if I had a Jayco Adventurer along for company.