The Australian caravan market is dominated by large, heavy vans but, particularly lately, there has been a small but noticeable uprising in the number of smaller, shorter and relatively lighter vans hitting the market. These vans are particularly suitable for travellers whose want to traverse offroad and heavily undulated tracks.

Brisbane-based Green RV’s 4.85m (15ft 11in) NextGen X hybrid is one such van. And its most noticeable feature, apart from the very striking black and white colour scheme, is its single axle.

Trimming a metre or two off a caravan’s length is great for its offroadability but it results in compromising the internal living space. So how creative has NextGen been in making a small, liveable van? 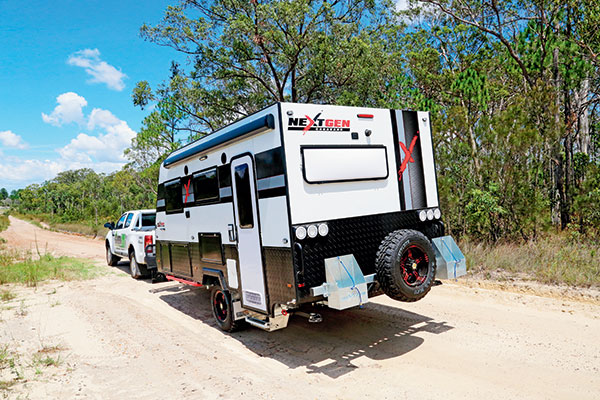 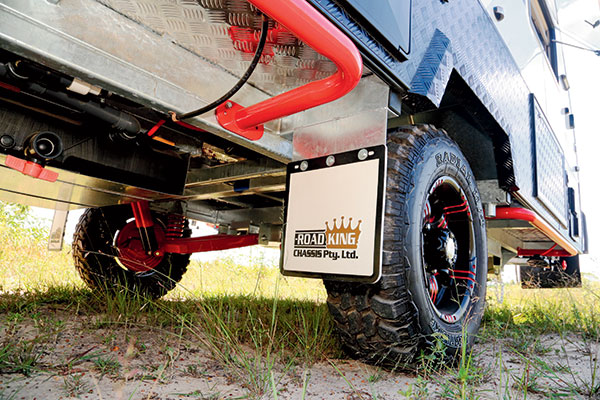 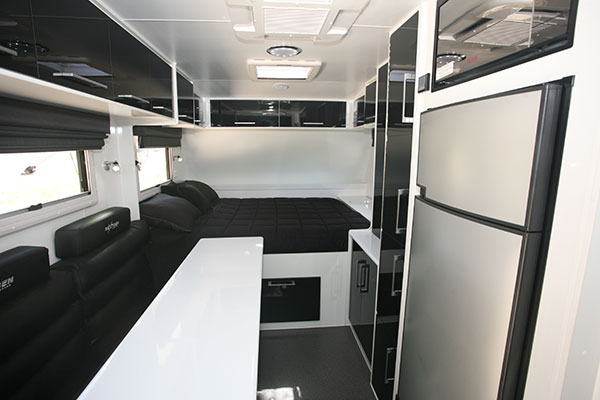 The van’s construction follows a tried-and-tested method. A meranti timber frame with braced spider web framing supports the aluminium composite clad bodywork. All that sits on a box section hot-dipped galvanised chassis that comes with 100x50mm (4in x 2in) main rails with 50x50mm (2in x 2in) risers and 150x50mm (6in x 2in) drawbar rails. Optional scrub rails are fitted on both sides of the van, at the front and along the rear offside. I noticed that the mounting bolts for the scrub bars were very small and the chassis connection points could be better located.

For offroading NextGen has fitted AL-KO Enduro Outback independent suspension with coil springs, trailing arms and two shock absorbers per wheel. The wheels are 16in alloys with 12in electric brakes and shod with LT245/75 R16 tyres.

Given the van’s relatively short length, the space under the chassis appears pretty crowded but most items still allow good ground clearance. The two 80L water tanks are fitted forward of the suspension mounts and, like the grey water tank behind the axle, they have galvanised sheet protection. Alloy checkerplate is fitted to the underside of the caravan floor for overall protection from road debris.

Inside, the NextGen X has a double bed, dinette, kitchen, and bathroom cubicle. However, to fit all that in the van’s 4.85m (15ft 11in) dimensions, there are a few trade-offs when compared to a longer van. But that’s to be expected. For instance, the 1.85x1.53m (6ft 1in x 5ft) bed sits across the front of the van, the bathroom cubicle fits into the rear offside corner and the dinette runs along the mid-nearside wall. That leaves room for the kitchen across the rear wall and the fridge with microwave oven above, in the mid offside space.

Normally, beds that sit across a van are a bit longer than the 1.85m (6ft 1in) NextGen X bed but that’s because there are a couple of compartments with hinged lids at the foot of this bed. If you wanted a longer bed, it’d be worth asking if the storage compartments could be removed.

Bedroom storage isn’t an issue; there are overhead lockers all around and a wardrobe with a shelved cupboard between the fridge and the bed.

Caravans don’t tend to vary too much in width, so it’s handy to know that you can fit a shower cubicle and a kitchen bench with four-burner cooker, stainless steel sink and drainer across the rear of a van. The bench is well lit by two LED strip lights fitted under the overhead lockers and there are double powerpoints at either end of the bench. Under the cooktop are a grill and oven, which leaves space for a cupboard, a floor locker and four drawers.

In a van this size, a combo shower/toilet cubicle is not a surprise but this one is relatively spacious. It comes with a flexible hose shower, a small corner washbasin and a rear wall Thetford cassette toilet.

The weights of this van require consideration when loading and towing. It has a Tare weight of 2286kg and an ATM of 2586kg, which give a payload capacity of 300kg – pretty standard for a single-axle. However, full water tanks will take up 160kg of that, and that large storage capacity might be a temptation to overload it. On future models the ATM will be upgraded to 2686kg, giving a load capacity of 400kg.

Behind my Holden Colorado tow vehicle, the van was quite well behaved and on bush tracks manoeuvring around was very easy.

Single-axle caravans are becoming increasingly available from many manufacturers.

This NextGen X model is a good example of its type. Sure, it doesn’t have the popular island bed but it does have everything else you need to get out on to the tracks in comfort, including an external kitchen!

It’ll be well suited to a traveller who wants a bit of caravan comfort but wants a shorter van that’s more appropriate for bush tracks with heavy undulation or tight corners.

The full review apprears in Caravan World #562. Subscribe today for the latest caravan reviews and news every month!