Australian Motor Homes (AMH), based in Newcastle, NSW, is well known for its extensive range of motorhomes. But over the last few years, AMH has also become a caravan dealer, offering its customers ranges from several manufacturers.

One of its most recent acquisitions is Royal Flair, is a long-time caravan builder with an extensive range of models in its stable – everything from serious offroad units to the imaginative Piazza, with a deck that opens out above the drawbar. 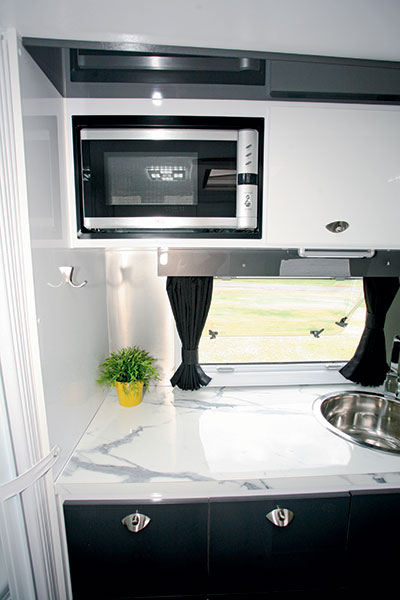 However, for this review, I opted for a more conventional on-road van from the Designer Series – the 21ft 4-2 ensuite model. It has a forward entry door, which is a little unusual for a van that is just over 6.5m (21ft 6in). It’s an advantage in many ways because it gives the designer a little more room to play with – a good feature since this is a front bedroom/full width rear bathroom layout.

Stepping into the Designer Series van reveals the very black (actually a rather dark grey) and white colour scheme. It might sound a bit stark, but the glossy white finish allows for plenty of reflected natural light. There’s a ceiling hatch in the main living area towards the rear of the van, but not above the bedroom area.

The asset of the forward entry door is revealed in both the kitchen and dinette. With the latter, it’s a slightly compressed club style which will give two people a bit of room to sit back – and one lucky person can put their feet up. The table is mounted on a single pedestal and has foot controls so it can be moved around easily and also lowered if using the lounge as a bed.

Power wise, in the kitchen dining area there is one mains 240V powerpoint at the rear end of the kitchen bench but there are no 12V/5V USB outlets.

Directly behind the dinette is the fridge cabinet with not only the 184L fridge but a full-height, multi-shelf cupboard as well as upper and lower lockers.

Just like the dinette, in this layout you get a bit more bang for your buck in the kitchen.

It does come with the expected features of a four-burner cooktop/grill, round stainless steel sink sans drainer and a microwave in the overhead locker area.

What you also get in addition to a decent bit of benchtop space are five good sized drawers, cupboard space under the sink, four floor lockers and a wire basket pantry. Above the kitchen bench, four overhead lockers offer more storage, as well as a mounting point for the radio/CD player.

It might sound a bit odd but the feature that stands out in the bedroom area is a corner cupboard that butts up against the dinette. Its angled design and multiple shelves offer easy storage for smaller items. That still leaves enough walk-around space at the foot of the 1.88m x 1.53m (6ft 2in x 5ft) bed and there is certainly plenty on the opposite side. Lifting the bed base gives access to the under-bed area but that is partly taken by the front tunnel boot. Across the front wall there is the usual side wardrobe and bedside cabinet setup.

Some bathrooms have quite small wall mirrors – but not this one. It occupies the entire rear wall space not taken up by the offside shower cubicle and vanity cabinet. The only issue with it is that it creates a problem for the photographer! The top-loading washing machine fits into the rear corner beside the cassette toilet, which doesn’t allow for much vanity cabinet cupboard space. However, there are three overhead lockers along the top of the rear wall. Fan vent hatches are fitted above the shower cubicle and the loo.

Royal Flair uses a fairly standard construction technique with its vans – a meranti timber frame for the body with aluminium cladding for the sides and Alucobond composite panel for the front wall, roof and rear wall.

Double glazed acrylic windows are fitted all round and the door is a Camec item with a separate security screen door.

The front tunnel boot on this design is split, with the nearside dedicated to a slide-out BBQ. It comes with its own LED strip light, and there are two others higher up as well as a grab handle light by the door.

Other nearside features include the Dometic awning and a hinged picnic table. Solid-looking grab handles are fitted to each corner but I figure they aren’t going to get too much use for hand manoeuvring, given the weight of the van.

A look under the van reveals that Royal Flair has not tried to over-design the SupaGal chassis, ie add more steel and hence weight. It’s built using 100mm x 50mm (4in x 2in) main rails and drawbar in the familiar box section style. Leaf spring suspension is fitted to the tandem axles and the two water tanks, protected by galvanised sheeting, are fitted either side of the axles.

With an ATM of 2590kg and a Tare of 2190kg, the Designer Series van doesn’t quite fit under the ‘Prado limit’ aka 2500kg, unless you are a fairly lightweight traveller. Thus, a larger tow vehicle is required or something like a Ford Ranger/Holden Colorado ute.

On the road, the van is a happy traveller without too much pitching or swaying but the usual issues apply when being passed by large trucks on the freeway. Keeping an eye on external mirrors is always a good idea.

Not everybody likes forward entry doors that step straight into the bedroom, but this Royal Flair layout is a good demonstration of the benefits. You get a longer kitchen, a larger dinette or both.

That may not sound like much but it’s surprising the difference it can make. I haven’t seen a Royal Flair van in a while but this one meets the standard I’d expect and presented very well.

The full review apprears in Caravan World #561. Subscribe today for the latest caravan reviews and news every month!