Back in January, there was a spate of articles in the mainstream media on the delights and joys (and I am not being funny!) of family caravan holidays during the busy Christmas/January period. At least one was from a writer still enjoying them as a parent and the rest were from people with fond memories of good times at the beachside caravan park.

I’m in the latter category and, although I don’t have any use for a family caravan, I still take a keen interest in them when they appear on my radar. So when Kedron’s Glen Gall contacted me about an XC3 family van that the manufacturer had not long completed, my antenna went up. 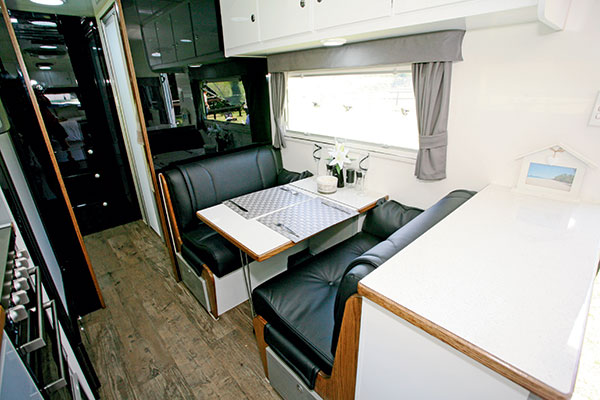 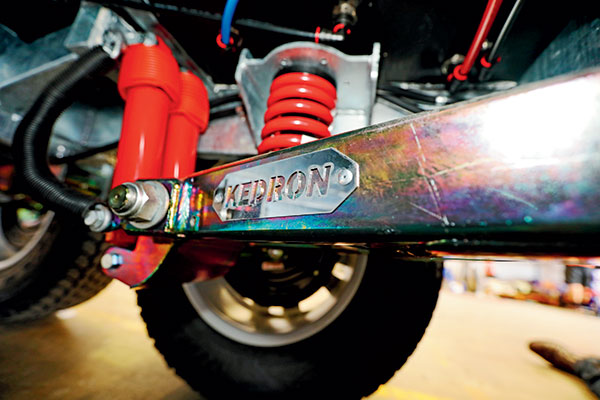 FULL OFFROAD CARAVAN FOR THE FAMILY

Being a Kedron van, the XC3 is, of course, designed for full offroad use. Customers want something that can accommodate their family, but also handle a bit of the rough stuff, too.

Length matters with offroad caravans – longer ones can be more difficult to handle but there must be a compromise for shorter vans that also need to have a layout that is both practical and comfortable. An external length of 6.6m (21ft 6in) has given the designer a fair bit of latitude and the result is a front island bed with north-south twin bunks in the rear offside corner.

Fitted into the area on the opposite side is a bathroom large enough to have separate facilities, leaving the centre for an offside kitchen and nearside cafe-style dinette. This arrangement, with bunks and bathroom in the rear, requires a forward entry door.

For a start, the bunks aren’t metal framed with a canvas ‘mattress’ – does anyone remember those? Instead, each bunk gets a proper 1.82m (6ft) mattress and comes with its own reading light, twin 240V powerpoint and a twin USB charging point – you’ve gotta keep those e-devices charged up! For smaller occupants, each bunk is also fitted with a safety net if needed.

For anyone in the rear beds, the bathroom is but a short step away. It comes with a separate shower cubicle one side and a bench-style Thetford cassette toilet on the other. Set behind that are both a vanity wash basin and a shaving cabinet above. It’s designed to not be too cramped but also not to take up any more space than necessary.

Moving further forward, the cafe dinette is upholstered in leather and will certainly seat a family of four without too much difficulty. The bi-fold table can be pushed back if not needed and both 240V and 12V/5V outlets are fitted above it. Four overhead lockers are above the dinette which, like the rest of the van, are side-hinged rather than top-hinged.

An additional feature of the dinette is the cabinet on the entry door side. It supplies both an extra cupboard (accessible from inside and out) and being on the same level as the kitchen bench provides some extra veggie cutting space or maybe somewhere just to park the family’s personal e-devices!

The kitchen comes with a multiple selection of both drawers and overhead lockers, as well as the expected stainless steel sink/drainer, four-burner cooktop/grill/separate oven and a Waeco 215L 12V compressor fridge. That last item is an option – a Dometic three-way fridge is normally supplied as standard. The wall behind the kitchen is also home to a flatscreen TV mounting. It’s located midway between the island beds and the dinette but sadly not easily seen from the bunk beds in the rear.

Mum and dad get the island bed up front. It measures 1.88m x 1.52m (6ft 2in x 5ft) and comes with decent array of overhead lockers plus good-sized bedside cabinets. The latter is due in part to the front tunnel boot. Windows are fitted all round the bedroom but, a little unusually, the nearside window is smaller than that on the opposite side. Also, the opened entry door restricts the nearside window opening.

This is certainly a well-appointed caravan. Standard are two 120Ah deep-cycle batteries but this one comes with a 300Ah Enerdrive lithium battery which is roughly equivalent to a 480Ah AGM. There are three (normally two) 150W solar panels to keep the battery charged up. To use all that power an 1800W inverter, wired to all 240V powerpoints, is fitted.

Living remotely for an extended period of time should not be an issue, especially with 260L of fresh water on board. The grey tank has a 60L capacity but the real limiter is probably the 18L toilet cassette tank.

Kedron’s XC3 is built in the same style as all its vans with a hot-dipped galvanised chassis that has a 150x50mm (6x2in) drawbar and chassis rails. The chassis is fitted with independent coil spring suspension and the poly moulded water tanks are fitted between the chassis rails. As you might expect, there’s plenty of ground clearance.

Under the alloy cladding, the van body is supported by an interlocked aluminium frame that is held together with high tensile steel punch pins.

Weight wise, the XC3 comes in with a Tare of 2825kg, so it’s no lightweight. However, the ATM of 3500kg does mean a very generous load capacity of 675kg. That’s good, given this is a family van with a large water tank capacity, but it means a large tow vehicle is required.

An unusual amount of external storage has been built in. Up front there’s a three quarter tunnel boot that’s fitted with a slide-out storage box on the nearside – something that could also be used for an external fridge. Around at the rear offside corner a second quite reasonably sized storage bin has been fitted. A large toolbox has been bolted on to the drawbar, along with two jerry can holders. A fishing rod/pole holder and the diesel fuel tank for the heater can be found on the front wall of the van. As I said, it’s a very busy place.

As a family van, the XC3 is certainly very impressive. There’s plenty of room for four people and it’s a van fitted with all those essential ‘luxuries’ for caravanning in style.

In addition it’s been built with serious offroad travel in mind, something that Kedron, aka the Gall Boys, are very familiar with.

The full review apprears in Caravan World #561. Subscribe today for the latest caravan reviews and news every month!