Interestingly, each of the caravans that I reviewed for this CW issue had a common feature. Apart from tandem axles, they each had the entry door forward of said axles. It could be an emerging trend – but also maybe just a coincidence. But, whatever the reason, in this Aura Titanium caravan which has external body length of 5.7m (18ft 8in), it turned out to be a useful feature.

Aura is a new name to me but the people behind the Victorian-based manufacturer are not and neither is its Queensland dealer Kratzmann Caravans, which knows a thing or two about vans! 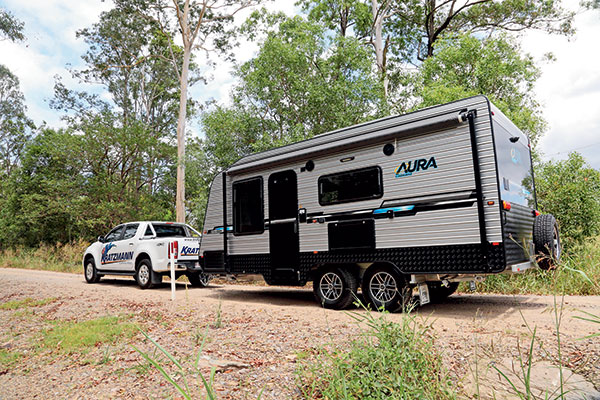 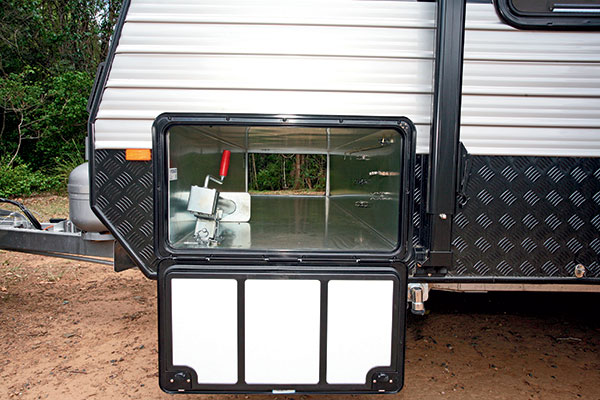 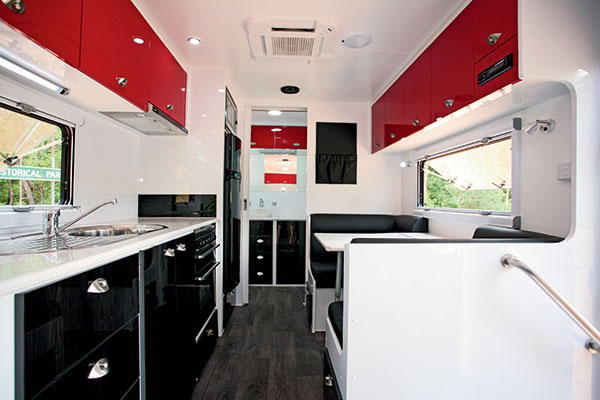 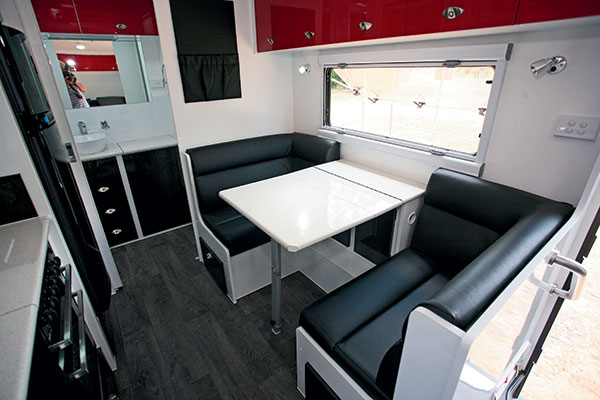 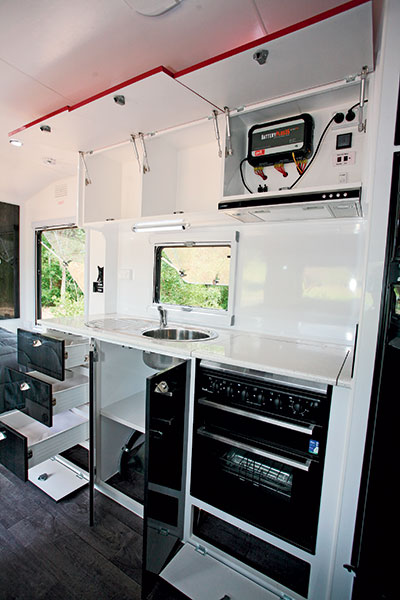 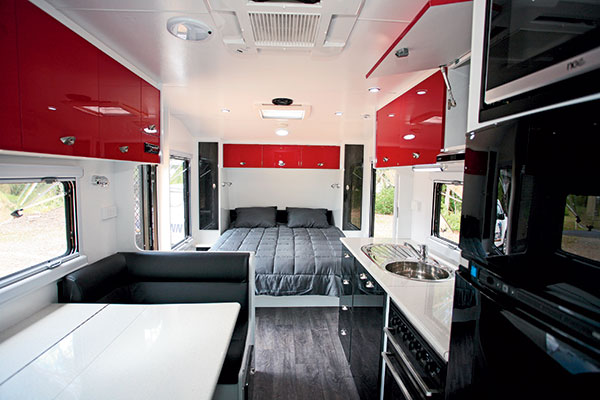 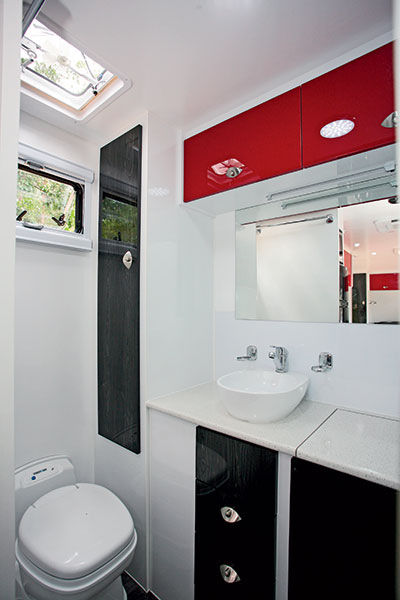 There are several models in the Titanium range and just about all of them, including this one, come with variations on the front island bed, rear bathroom (FBRB) theme. That includes the family layout where you get bunks and the bathroom in the rear.

Aura vans are built on a DuraGal box section chassis with 100x50mm (4x2in) main rails and drawbar section that is welded to the main rails and runs right back to the suspension mounts. The tandem-axle leaf spring suspension sans shock absorbers in fairly conventional and it connects to the 15in alloy wheels. Fitted between the chassis rails above and behind the suspension are the two 80L water tanks protected by galvanised sheeting. An interesting addition was the mounting frame for a third water tank in front of the suspension.

The house battery box was fitted to the front offside chassis rails. It’s more commonly seen on offroad caravans and it’s not a bad location as it doesn’t take up boot space and is still reasonably accessible.

The overall body structure has a meranti timber frame, silver aluminium cladding and a lower waistline of black alloy checkerplate. The front tunnel boot is not particularly large but will certainly cope with all your camping basics – chairs, table, hoses, power leads and a toolbox or two. For smaller items, plastic boxes with roller wheels in the base often work well.

Euro Vision windows – the double glazed acrylic awning style – are fitted all round and door is a Camec security one. With a van of this length, there’s the usual problem with the open door/open window clash and I sometimes wish there was a better solution than a straightened-out coat hanger.

For those who love the al-fresco lifestyle, the Titanium comes with a hinged picnic table, Dometic awning and external speakers. One LED strip light is fitted mid-wall and there is also a grab handle light. Both mains 240V and 12V outlets are fitted either side of the picnic table.

With an ATM of 2500kg, the Titanium fits neatly under the so-called ‘Prado limit’ of vehicles with a 2500kg tow capacity. And the Tare of 2040kg gives a generous 460kg of load capacity. The van also has a slightly lighter unladen ball weight than usual at 140kg.

I spent more time on narrow country roads than I did on the freeway when reviewing this van and, I have to say, it generally handled well behind the Colorado ute. It also manoeuvered quite well, too, which I noticed because I spent a lot more than usual backing and turning this van around.

One of the standout features inside the van is the bright red colour on all the overhead locker doors. It’s a change from the more common, lighter hues – but for me it didn’t go all that well with the glossy black on all the cupboard doors and fridge. A bit too dramatic, perhaps, but maybe all red would have been too much. I am sure the choice is yours!

One of the benefits of the FBRB layout for us reviewers is that we can relax in the dinette, which is a cafe-style one in this case, and take in most of the van from there. Naturally the bi-fold table is excellent for taking notes as well as serving lunch.

Under the table is small cupboard which contains both 240V mains and 12V/5V USB outlets. It’s a bit fiddly to get at, but certainly better than the seat base where they often are. The large grometted hole on one side of the cupboard means leads don’t have to trail on the floor.

Reading lights are fitted under the overhead lockers and floor lockers give access to the under-seat areas.

Fitting the microwave above the 185L Thetford fridge means the rest of the kitchen bench is dedicated to the full cooktop/grill/separate oven and adjoining stainless steel sink/drainer. It’s not a particularly long bench area, so there’s a minimal amount of benchtop space – the cooker does have a flush lid – but there are three drawers and a cupboard, along with a couple of floor lockers. Above the rangehood there is a third overhead locker but that is used for the battery management system, water tank gauges and various control switches.

Up front, the 1.83m x 1.5m (6ft x 5ft) island bed has a metal framed posture slatted bed base. That can be lifted to get to the storage area underneath but it’s not particularly large, given the front tunnel boot. The bed walk-around space on either side is relatively good. Large windows on both sides of the bed supply a generous amount of natural light and ventilation and there’s a small roof hatch as well. Near the kitchen bench on the offside wall is where the flatscreen TV is mounted.

Apart from the red and black dramatics, which do add character, the bathroom is quite conventional. It has an offside Thetford cassette toilet, nearside shower cubicle and a rest-of-wall vanity cabinet.

The latter includes a wash basin, wall mirror, top-loading washing machine and an assortment of drawers and cupboards. Particularly useful is the multi-shelved corner cupboard that can be used for linen.

What I liked about this particular Aura Titanium is that it’s neither a particularly long van nor particularly heavy. This means that it’s suited to a wide range of tow vehicles, including utes with a 3500kg tow rating – that is certainly plenty of excess capacity.

And, on top of all of that, it comes with the contemporary FBRB layout with a forward entry door which means it has room to move and is very user friendly.

You can find the full review in Caravan World #561. Subscribe today for the latest caravan reviews and news every month!