The double-bunk family ‘offroader’ boasts a raft of upgrades over previous models and $20,000 worth of fitted options, to be precise.

It’s a quantum leap up from Wonderland RV’s Amaroo Hornet LE that I’ve previously tested. The XTR2200 raises the bar – and the ride, with good ground clearance courtesy of a Roadking double 4in zinc galvanised chassis with 6in riser (giving it 2in more under-body elevation than the Hornet LE – something you’ll appreciate out on the track). In fact, when its corner stabilisers are dropped down, I thought the XTR2200 mimicked a ‘Queenslander’ – one of those tropical Australian houses built on stumps in the latter half of the 19th century and early part of the 20th century. 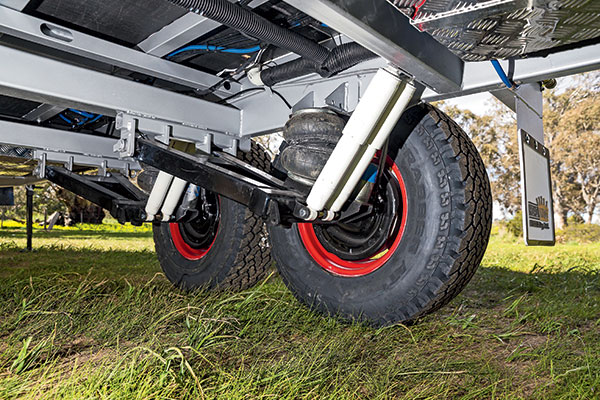 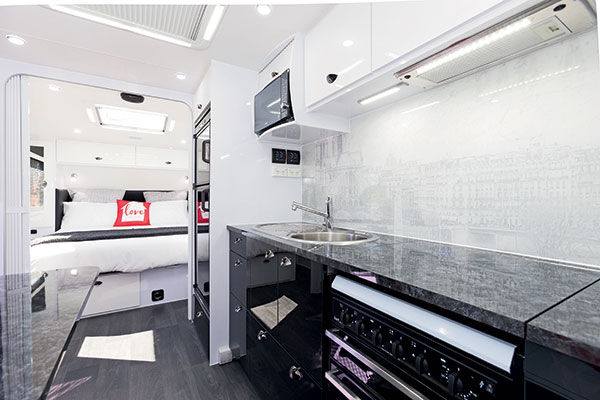 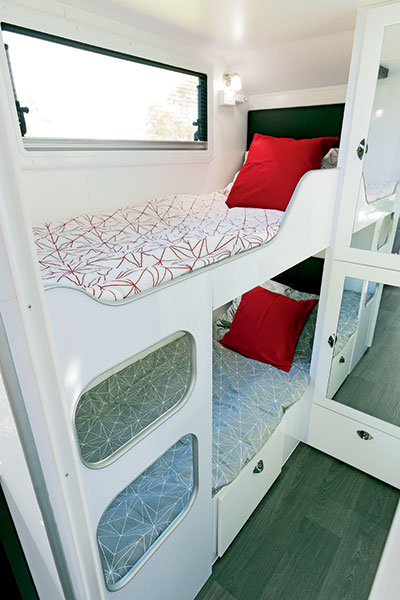 But the impressive underpinnings don’t end there. The 6.76m (22ft 2in) XTR2200 rides on Cruisemaster XT airbag suspension, with 12in electric brakes and Dexter Sway Control, and has been afforded a wheel and tyre upgrade (powder-coated 16in rims with 265/75 R16 General Grabber tyres).

I towed the XTR2200 with a graphite-coloured LandCruiser 200 Series GXL TD over dirt tracks plenty of uneven ground and the Toyota’s own Kinetic Dynamic Suspension System was unimpeded. All in all, it was an ultra-smooth ride and I was impressed with the XTR2200’s handling. The LC200 was a good match for the hefty XTR2200 which hits the scales with a Tare of 2900kg and ATM of 3500kg. Nothing smaller will do. But its weight and size – stretching to more than 9.2m (30ft 4in) at travel length will be limiting for offroad work. At more than 3.5ft longer than the Hornet LE, I wonder about its manoeuvrability on really tight tracks, despite its undoubtable strength.

This van comes up trumps with its bright red, black and grey decals complemented by 850mm-high X-plate (an increase of 250mm on the Hornet LE) and colour-matched wheels in red. It’s a sharp contrast to the bright yellow and black Hornet LE we reviewed, but equally as appealing. No one will be able to miss you on the road in these vans!

Chassis, frame and suspension aside, the XTR2200 has an off-the-grid electrics setup to die for – 300Ah lithium battery, Redarc The Manager30 battery management system and a 600W solar capacity.

Plus, a 3000W inverter (wired to all the 240V outlets and the air-conditioner) allows you to pull over for lunch in the heat of the day (even without shade) and crank up the cooling for 45 minutes or so.

The internal decor looks great, from the white acrylic overhead lockers and black base cupboard doors, to the black microfibre leather lounge, benchtop and double laminate solid furniture. In fact, the interior walls and solid furniture are matched together. This allows all load-bearing furniture sections to be fixed from the outside in, with 50mm-long screws penetrating through the 19mm wall into the solid furniture.

The most eye-catching – but, perhaps, most contentious – internal feature is a 3D acrylic kitchen splashback with artwork from a bygone era. It’s a real talking point and won’t appeal to all and sundry, but I’m fond of its yesteryear effect. This Parisian-type mural/frieze is similar to what you’d expect on the walls of a high-end European hotel or restaurant, not an offroad caravan!

Given its increased external body length over the Hornet LE, the XTR2200 has more internal space – particularly in the front bedroom. This not only allows for a 1.9x1.52m (6ft 3in x 5ft) pillowtop caravan-queen-size bed but a concertina door for privacy from the kids.

The swanky kitchen is equipped for long bouts away from civilisation with a Swift cooktop, grill and oven, 190L 12V Waeco Coolmatic compressor fridge, Sphere microwave, deep bowl sink and drainer, and pull-out pantry at your fingertips. Soft-close drawers, stainless piano hinges and storage aplenty exemplify the attention to detail.

Naturally, family matters in the XTR2200 and, to that end, the rear double bunks each at 1.9x0.6m (6ft 3in x 2ft 6in), with two 13.3in DVD players, will keep the kids comfortable and preoccupied (sorry, I meant entertained). And there’s also a concertina door – as even the kids are entitled to a certain degree of privacy!

Directly opposite the kids’ sleeping quarters is an ensuite with separate full-height one-piece moulded fibreglass shower and a Dometic Saneo cassette toilet. Meanwhile, wedged between the bunks and bathroom, is a mirrored cupboard with three shelves for storing clothing items, and a mirrored compartment that conceals a slide-out 2.5kg washing machine.

The XTR2200 also has the best of both worlds for fending off Australia’s unrelenting climate, with a roof-mounted Aircommand Ibis 3 reverse cycle air-conditioner and a Truma gas heater.

The Wonderland RV XTR2200 melds family adventures with offroad-ability – something we haven’t seen a lot of to date.

Its build quality and strength would see it win the battle against most hostile environments, however, its undeniable size and bulk will be a limiting factor into which charted, or uncharted, territories you’re able to travel.

But with a ‘Love This Land’ moniker proudly etched on the rear wall, there’s no doubt that would be made all the more enjoyable in the XTR2200.

The full review appears in Caravan World #560 2017. Subscribe today for the latest caravan reviews and news every month!