Colour schemes aren’t everything in the overall design of caravans but sometimes they have an effect. Considering the current choice of external caravan colours is mostly white or the more recent trend of a silvery grey, when I walked into the premises of Caravan World at Chevallum on Queensland’s Sunshine Coast, the lime green coloured Kokoda Cadet Platinum took centre stage. Actually it wasn’t only the colour scheme that caught my attention because the Cadet Platinum has a family-orientated layout, yet one that retains much of the standard front island bed floor plan.

The Cadet Platinum has an external body length of 6.25m (20ft 6in) and a Tare of 2560kg. With an ATM of 3060kg, that gives a payload of 500kg but it also pushes the van into either Toyota LandCruiser/Nissan Patrol territory or the domain of utes like Ford’s Ranger or Holden’s Colorado. Tow vehicle choice might well depend on how the family likes to travel, with the big 4WDs offering a more comfortable ride and a bit more towing stability. 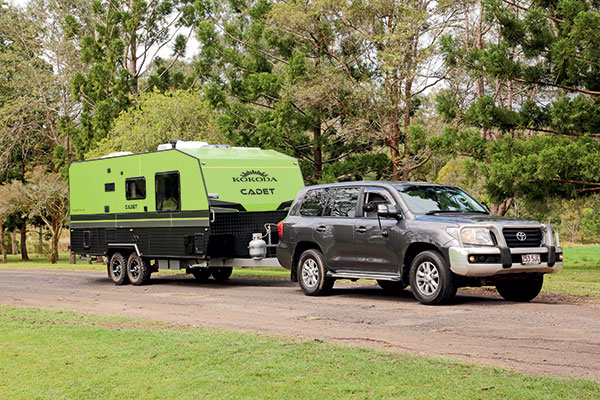 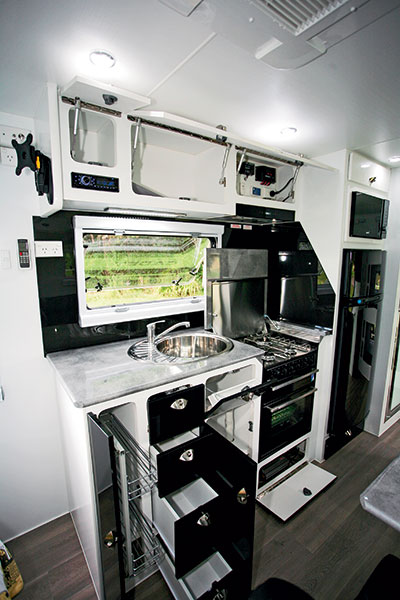 However, the choice of a tow vehicle somewhat depends on where the van is taken. Kokoda badges its Cadet Platinum as a semi-offroad caravan rather than full offroad. But I reckon that many who buy an ‘offroad’ caravan really only ever do the rough road stuff, which is where a van like this comes into its own.

For my little trip, which consisted mostly of rough roads around the Sunshine Coast Hinterland, the Cadet Platinum was a well-behaved tourer. The eagle eyed might notice rain covered windows – I experienced inclement weather on the day. The van wasn’t fully laden but CW photoshoots often consist of short drives, quick turn arounds and tight manoeuvring to capture a decent photo. All of which often provide a very good indication of a caravan’s handling.

There aren’t too many surprises underneath the Cadet Platinum, which comes with a DuraGal box section chassis that has 100x50mm (4in x 2in) main rails, a 50x50mm (2in x 2in) riser and 150x50mm (6in x 2in) drawbar rails that run back to the suspension mounts. Fitted to the pointy end of the drawbar is a DO35 offroad hitch.

On the tandem axles, the independent suspension – Kokoda’s Tuff Ride 3.3kg system with coil springs and one shock absorber per wheel – does look a little different to the usual trailing arm setup, while 12in electric brakes are fitted to the 15in alloy wheels. A note regarding weight here is that both 95L water tanks are fitted forward of the suspension and both battery boxes are welded to the chassis rails in front of the offside wheels. Although the van comes in with an empty ball weight of 160kg, a loaded check might be prudent – especially with family gear on board.

In addition to the front tunnel boot, which offers a generous storage area, there are two extra bins (one atop of the other) behind the entry door. A small step would be convenient for reaching the top bin, given its height. Four very solid grab handles are fitted to each corner of the van to push it around but I suspect they’d be more useful as towel rails, given the its weight. Unless you are very strong, of course!

With this layout, the normal feature would be a full-width bathroom across the rear of the van. However, that has been replaced with triple bunk beds and a small wardrobe area. There is still a bathroom, located opposite the rear entry door, leaving the rest of the space for a nearside club lounge, offside kitchen bench and an island bed up front. A black and white colour scheme has been used throughout; the black being for the cabinetry and upholstery, with white being used for just about everything else. Large Seitz acrylic windows are fitted all round, including on the bunk bed rear wall. LED lights are fitted where needed, as are 240V powerpoints. All the cabinetry work fits together quite neatly and piano hinges are used on all cupboards and lockers.

Each bunk is generously sized at 1.88x0.64m (6ft 2in x 2ft 1in) and comes with its own reading light, 240V powerpoint, 12V socket and window. So any bunk occupant should be well pleased with the level of appointments. The only critique is the wooden ladder for accessing the bunks. I reckon it’s awkward to use and could be improved by having wider steps, if nothing else.

Up front, the main bed measures 1.83x1.53m (6ft x 5ft) and comes with the standard bedhead of wardrobes, overhead lockers and bedside cabinets. The mattress sits on a metal-framed, posture-slatted bed base that lifts easily to get to the small storage section underneath which is closed off from the tunnel boot.

The flat screen TV mounting is located at the end of the kitchen overhead lockers, meaning the TV can be viewed from the bed and the dinette but not so much the bunk bed, which could be regarded as a boon when the children are supposed to be sleeping.

Although this van has sleeping for five people, the club lounge is really only going to seat four without being too squashy, unless the junior members are quite small. An extra stool/chair for may well be the simple answer to that problem. Otherwise, the lounge with its contoured cushions is quite comfortable to sit on. The table isn’t particularly large but can be swivelled around on its single pole mounting or lifted out of the way if not needed. Floor locker doors give access to the under-seat section, and mounted on the seat base are both 240V and 12V outlets.

Family caravans are a bit of a challenge in the industry. They’re not always fast moving and so dealers don’t always stock them. When a customer turns up looking for a family van, if there’s none on display the customer can’t be blamed for thinking they’re unavailable. It’s a bit chicken-and-egg but the good news is that I’ve heard from more than one dealer that family vans like the Cadet Platinum are becoming increasingly popular.

In some ways, the floorplan is a bit of a compromise but I reckon it’s a happy one – a family caravan layout in a van that is not overly long and is well short of the 3500kg LandCruiser/Patrol towing limit. And another thing, for those who don’t like the bright green look, there are a number of colour choices.