I don’t usually start a caravan review by mentioning the weather but, in this case, I feel it’s pertinent. Having collected my Swift Explorer 584 review van from its Unanderra, NSW, dealer David Carlon, I headed out to Lake Illawarra to put the van through its paces around the lake and to find a great lakeside location to take some photos.

It seemed like a good idea at the time and I found a nice position for the van where the sun was in a good location and not hiding behind a cloud, the grass was flat and the lake was looking good. However, what I had not factored in on this otherwise nice, sunny day was the blustering south-westerly wind that was blowing across the lake. It became apparent very quickly that it was impossible to put the Explorer’s Carefree Fiesta awning out, the very stylish Dometic windows could only be opened a fraction and the wind was all too much for the magnetic catch designed to hold the Dometic door open. As for me, sitting down in my camp chair by the water’s edge, drinking my coffee and watching the world go by was out of the question! 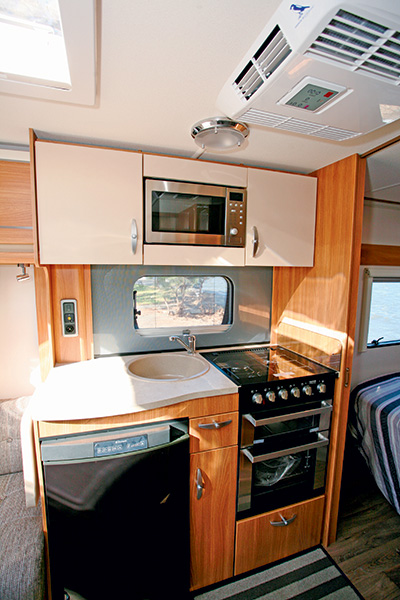 However, one of the benefits of this typical British-style van, for which Swift is known, is the large front lounge and windows and, had I been staying longer, I’d have turned the van around to face the lake – a simple job with a relatively lightweight, single-axle van – and enjoyed my coffee from inside the comfort of the van.

Swift caravans have been available in Australia for several years now, with most in the same form as those that are built for Britain. However, in recent times, a special range has been ‘Australianised’ in order to better meet local customer expectations. Modifications consist of things such as a raised Al-Ko chassis, an 80L water tank fitted between the chassis rails, solar panels, a Dometic security door and additional external storage.

The Explorer 584 is one of these new Swift breeds and has an external length of 6.63m (21ft 9in) despite having just a single axle. It also comes with a very acceptable Tare weight of 1410kg and an ATM of 1800kg, which gives it a load capacity more in keeping with tandem-axle vans.

The standard Al-Ko chassis has been raised by 100mm but it’s also been beefed up in the process. The Al-Ko independent torsion suspension is unchanged, as is the standard Al-Ko hitch up front. I don’t mind these hitches at all and while there are some differences to the simpler ball coupling, they are still easy to use.

Above the chassis, the body structure is an interesting mix of aluminium sandwich composite walls, fibreglass composite roof and a moulded fibreglass front and rear.

In addition to the front boot, which contains both the spare wheel and gas cylinders, there are two nearside bin doors. The forward one allows access to the storage area under the front lounge and the rear one does the same for the under-bed storage space.

Setting up is easy, although I think we’ve all become used to the quick-release corner stabilisers, which makes winding the standard ones fitted to this van something of a chore. However, a battery drill with an appropriately sized socket will make the job a cinch.

There’s much to be said for an awning that has the arm against the van body, but a disadvantage with the Carefree awning fitted here is that the front arm blocks the front window when the awning is rolled up.

Inside the Explorer, the layout is an interesting mix of what you might call traditional British style with some popular Australian features. The front lounge with two sideways-facing lounges that can be converted into a double bed is a British invention all the way and, as I mentioned above, it’s a great place for watching the world going by, whatever the weather.

The full-width rear bathroom, however, is a very contemporary Australian feature and it allows for the east-west double bed to be fitted against the nearside wall and the kitchen bench opposite the entry door.

As far as interior styling goes, the Explorer is fitted with timber-look cabinetry – something that’s obviously still in vogue in Britain.

The effect of the windows on the Explorer’s interior is a particularly interesting part of this van. Up front, there are windows all-round as well as a large Skyview-style hatch, resulting in plenty of natural light and good ventilation, too. In the bedroom and bathroom, the roof hatches are smaller and the bedroom only has a window in the offside wall, which makes the area somewhat darker. I also suspect that, on a warm night, cross-flow ventilation might be lacking in this area.

The front lounge is multi-functional. It can, of course, be used as a seating area, with a choice of two tables – there’s a small one, which slides out from the centre cabinet, as well as a large freestanding one, which is stored in the wardrobe beside the rear bed.

Making up the 2.02x1.56m (6ft 8in x 5ft 1in) front bed out of the lounges is a matter of dragging the slatted bed base out from under the cabinet and using the seat backs to fill the gap. There is some storage under the seats but the water heater and plumbing pipework (offside), and electrical fuse panel (nearside) are also housed here.

The kitchens in British and European vans are often on the small side, and I imagine it’s due to the local expectations there. This one is no exception and has an under-bench 115L Dometic three-way fridge, which absorbs some of what could be storage space. Included in the kitchen is a full four-burner cooktop, grill and oven along with a microwave above the round sink. That leaves room for a small drawer, a wire basket pantry, one floor locker and two overhead lockers. A larger cutlery drawer is fitted into the low cabinet on the other side of the van.

Behind the kitchen, the double bed in its extended position measures 1.85x1.33m (6ft 1in x 4ft 4in), so it’s not huge, even when extended by a bolster. I mention this because, at its full length, the bed is a bit awkward to get around to get to the bathroom.

There is the usual array of overhead lockers and bedside wardrobes and drawers around the bed but, in a deviation from the norm, the forward wardrobe is quite large and will accept a range of clothing for every season. The bed itself has a slatted timber base, which can be lifted to give easy access to the under-bed storage from inside, in addition to the aforementioned external access hatch.

Although it has a door set nearer the offside, the bathroom is quite conventional with a nearside shower cubicle, centre vanity cabinet and offside Thetford cassette toilet. It’s well ventilated with a large frosted window and good-sized roof hatch. I couldn’t see any powerpoints for hair dryers and shavers but, like the rest of the van, it has ducted space heating. Although slightly smaller than some bathrooms I have seen lately, it is still a very usable size.

On the electrics front, the Explorer is well equipped with a 100Ah deep-cycle battery, 120W of solar panels and all the powerpoints have been converted to the Australian style, although they are all single not double pole. All the main electrical controls are on a panel above the entry door with the 12V fuses under the front seat.

It doesn’t always happen in the RV industry but the Swift Explorer seems to have reached the happy compromise of being a British-built caravan while meeting several useful Australian requirements. That’s important because it keeps those who like the British style of van happy but it’s also attractive to buyers who like a lighter weight van but still want some of the more familiar design features.

The full test appears in Caravan World #553 2016. Subscribe today for the latest caravan reviews and news every month!