Queensland caravan manufacturer Bushtracker has earned a strong and impressive reputation for its offroad caravans. And because offroaders are the only type of vans this company builds, it has plenty of experience in that department.

Casual observers might have the impression that Bushtracker caravans don’t seem to change much and, while that might be true in terms of the overall appearance and basic structure (when you are on to a good thing, why change it?), it is not the case with product development, which is constantly evolving.

Indeed, the Bushtracker team spends a large amount of time on the road, not only testing its own gear but the supplied components as well. That might sound like overkill, but there are some products out there that don’t stand up to extended rough-road use. 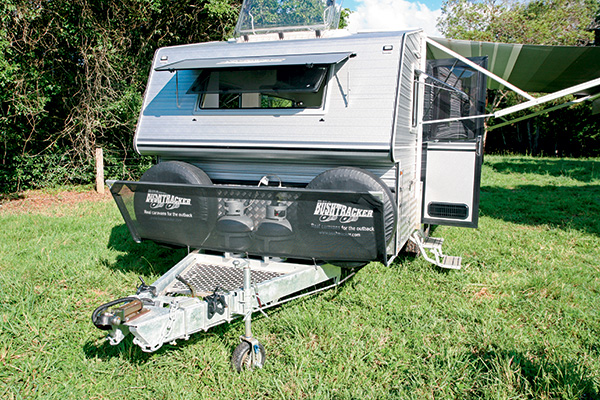 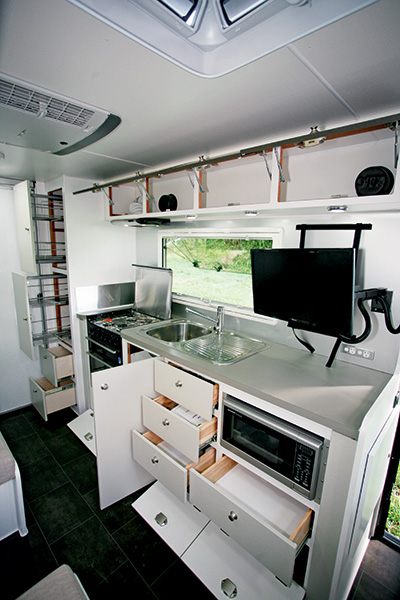 Bushtracker builds a range of customisable caravans which can be tailored to the owner’s individual desires (within reason), but there is also a standard range of layouts available, including the 19ft (5.8m) model we’ve reviewed here. In this case, the van’s external length actually matches its name – not always a given!

Moving outside, the Bushtracker body is well supported by an aluminium frame that is fully welded and double structurally welded. It’s built in a box-section style and has a minimum of 2mm thickness with 5mm overlapping sections in joint areas. Aluminium is also the material of choice for both the cladding and the checkerplate around the bottom of the body. And, according to Bushtracker, this is definitely for practical, protective reasons, not decorative ones!

The water-sealing door, the large tunnel boot and the rear departure angle are classic Bushtracker features.

The drawbar is quite busy with two spare wheels and two 9kg gas cylinders behind the stone guard, a mesh rack between the drawbar rails and a Hitchmaster DO35 hitch and the swing-up jockey wheel.

The Bushtracker 19ft comes with a substantial hot-dipped galvanised chassis. It has dual 150x50mm (6x2in) rails and rides on Simplicity independent, load-sharing, tandem-axle suspension that uses trailing arms and an inverted leaf spring, rather than coils. It comes shod with 16in alloy wheels.

For extended remote area camping, the Bushtracker 19ft offers plenty of capacity in all areas. Three 90L tanks (one drinking, two general use) ensure plenty of water supply and for sensitive areas, there’s a 90L grey water tank fitted as well, plus a 200Ah lithium battery which is backed up by two 150W solar panels and a 20A mains charger.

The Bushtracker 19ft is designed with a forward entry door, which allows the front island bed/rear bathroom layout to work without too much compromise. The van also comes with what Bushtracker calls its ‘Modern Choices’ interior. While the more traditional timber finish, which has carpentry enthusiasts swooning over it, is still available, it’s easy to see why the lighter, more contemporary look has been used here. It results in a bright and spacious interior, which is pleasing to the eye.

Waterproof ply and meranti timber are used for the basic cabinetry structure inside. To give the required accuracy, CNC-machined timber ensures everything has a tight fit – something essential for an offroad caravan.

From the outside, all Bushtracker caravans have an easily identifiable shape. The front has a small overhang that creates a nominal amount of weather protection for the spare wheels and gas cylinders, and it’s also quite practical on the inside, as part of the air space above the drawbar can be used for the bed.

Another feature up front is the large tunnel boot, which results in the characteristically high island bed inside. But, never fear, the bed is not as difficult to get into as it might sound because there are raised steps on both sides, which can also be used for under-floor storage. The raised bed also allows for a good set of six drawers to be installed under the end of the bed, which is a very effective use of that space.

The bed base can still be lifted and doing so allows access to both the detachable dinette table and most of the 12V electrical essentials, like the battery charger and 12V fuses, which are stored underneath. But, when you take into account the angle of the raised bed base, it is a bit awkward to get at.

Wardrobes and bedside cabinets with good shelf space are fitted on both sides of the bed, as well as 240V and 5V USB power sockets.

The side windows in the bedroom are different sizes, which looks a bit odd from the inside, but there is a good reason for it. The van’s shape means the awning arm has to run down the wall between the entry door and the front window.

The Bushtracker 19ft’s kitchen is a decent size and is a real feature of this van. There are six drawers of various sizes (two of which are wider than usual), wire basket pantries, and even a reasonable amount of benchtop space. Even with all that, there is still room for a four-burner cooktop, grill, oven and an under-bench microwave. Across the way, the Dometic 190L three-way fridge fits in between the dinette and the bathroom wall.

The dinette obviously comes with some other essentials, such as comfortable back and wall cushions, not to mention a detachable table and overhead lockers. The lower cupboard between the seats has a small shelf, so is ideal for drinks and nibbles when the table is packed away. One of the overhead lockers contains the electrical switch panel and the audio controls. Opposite the dinette, the flatscreen TV is mounted on the kitchen wall and it can be swivelled around to be seen from either the bed or dinette. For travel, it can be securely strapped to the wall.

A sub-woofer isn’t something you find in every caravan, but this particular van has one and it’s neatly fitted under the front dinette seat. It won’t appeal to everybody but if you like a bit of decent music or a good TV sound system, then this will appeal to you.

There is a little bit more to Bushtracker shower cubicles than meets the eye. They always contain a couple of storage lockers with water-sealed doors, which is great for storing little bits and pieces. This van’s shower is located on the offside and the cassette toilet, which is quite a tight fit between the wall and the cabinet, is on the opposite side. Across the rear is a vanity with good-sized drawers and cupboard, complete with front-loading washing machine.

It’s hard not to be impressed by this purpose-built 19ft offroad caravan. There are plenty of clues that it’s built from experience and the attention to detail is very good.

In addition to that, it comes with everything from 12V fans to a considerable battery capacity to ensure that plenty of remote offroad travel is within its reach.

Although the van has what some might consider a standard layout, there are plenty of options and individual requirements that can be built in. It fits perfectly with Bushtracker’s ‘at home in the bush’ philosophy.

The full test appears in Caravan World #553 2016. Subscribe today for the latest caravan reviews and news every month!