Brothers Sean and Ashley Trounce have put a new spin on their Safari Delta ensuite range – quite literally! The siblings design their own caravans, and happily accept feedback from existing clients regarding their fleet’s standard features, while also heeding the requirements of potential new customers.

“It’s very simple, if our buyers return and ask for shelving in the overhead cupboards above their seating, we make it standard,” Sean said. “We regularly travel in our Safari vans, so we also look for the convenience of, say, two double powerpoints in the kitchen, and make it standard in every layout.”

Sean says the designs remain very similar to their initial blueprints of almost 15 years ago, except for the tweaking of floorplans due to customer response. 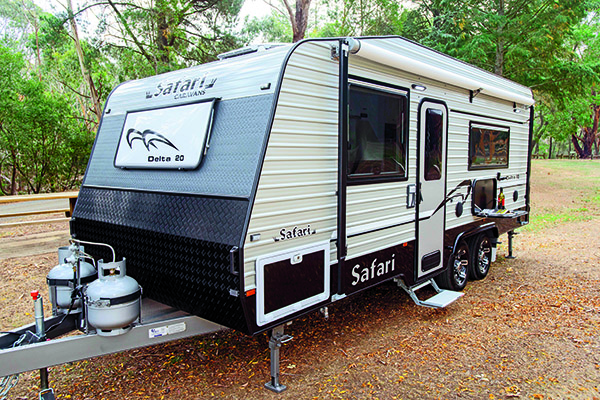 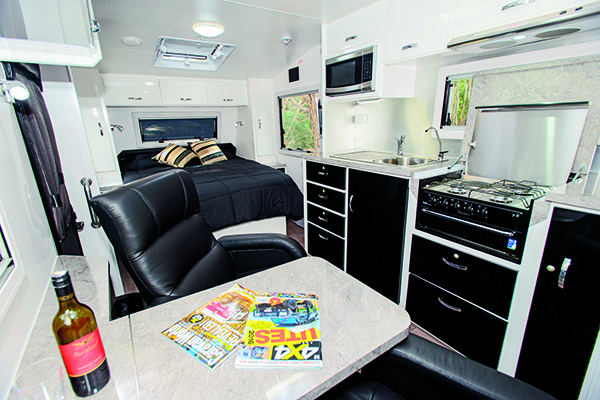 “Our Delta 20 range is a good example as we now have multiple layouts available, one of which is the swivel chair design,” he said.

In fact, it was a Safari client who was the catalyst behind the swivel chair innovation.

“People who purchase this style have usually owned several caravans and have seen one of our swivel chair vans on the road and have taken to the concept, just looking for that extra level of comfort on extended trips.”

CW recently tested the Safari Delta 20 Swivel Chair at Gong Gong Reservoir Park, Vic – situated on the Yarowee River near Ballarat – and it was quite clear that the swivel chairs (which pivot 360°) are the hero of this refined on-road caravan.

Certainly, the fully imported recliners (which lay back and come with portable footrests) were the main talking point for anyone who entered the Delta, which comes sans a traditional lounge area. I sense they won’t be everyone’s cup of tea, but I like the versatility they offer and, to a large degree, I think the notion works. The chairs are heavy enough, Sean said, they should remain stable while the van’s in transit but they do not come with straps to secure them and I felt they should. They are also easy to move around while the van is stationary.

Not only did they pass my extreme comfort test (after planting my ample posterior in one, I didn’t want to budge), I also appreciated just how much more space these swivel chairs allow in the Delta’s midriff.

And although the swivel chairs are the unique selling point of the Delta 20, it’s definitely not without other highlights.

I was more than impressed with the aesthetics of the black Dometic tunnel boot doors, with white trim, complemented, more importantly, by their convenience. The tunnel boot doors are high enough to fit a Weber Baby Q barbecue, and this higher boot hatch also raises the van’s caravan-queen-size bed, located directly above the boot. The higher bed (6ft 5in x 5ft) is a plus for climbing in and out at night and also creates greater under-bed storage. Still on the bedroom, I loved the black and white contrasting colours. According to Sean, black and white is a popular internal colour scheme in vans at the moment.

I was also partial to the practicality of the mantle running the length of the quasi-lounge area, plus the partitioned overhead cupboards which divide the space nicely to accommodate more items.

And I thought the water-saving, one-piece shower was a real winner. Sean said the one-piece fibreglass shower is reliable and will offer a better seal in the long run, and combined with the water-saving shower head, completes a perfect match for free camping.

I also couldn’t help but notice the user-friendly, and safe, height of the Sphere microwave. Apparently a lowered microwave is a compulsory design in all Safari Caravans. “It just seems to be a very important issue for our customers, who prefer the microwave lowered and over the sink drainer,” Sean said.

Externally, the Delta 20 is a flashy specimen courtesy of its luminous white high-profile aluminium cladding along with low black striping on both sides. The front of the van is adorned in black checkerplate, with vinyl pebble guard above, and a window protector.

But I thought the 6in A-frame could have done with some standard inclusions such as a toolbox, stoneguard and protection for the tap. But it did come with two 9kg gas cylinders and a mesh tray.

The Safari’s nearside is pretty much standard fare externally with a Camec round-top door, 12V and 240V powerpoints, TV outlet, Dometic roll-out awning with centre support bracket, drop-down picnic table, gas outlet, two marine-grade speakers and two LED annexe lights, and a Techno-step. But I reckon it falls a little short in the storage stakes without a rear hatch or generator locker.

The Safari also has a 105Ah AGM battery protected by a black checkerplate cover, a 120W roof-mounted solar panel, two 95L water tanks and LED running lights. At the rear of the van are LED taillights and a heavy-duty three-pronged bumper bar with spare wheel.

With a lightweight Tare of 2080kg and an ATM of 2500kg, the Delta 20 is in so-called ‘Prado-friendly’ territory; however, the ATM can be upgraded to 2800kg dependent on your tow vehicle. It rides on a FP chassis with Al-Ko suspension, 10in electric brakes, 15in on-road tyres and alloy rims.

The internal aspects of the van really impressed me. Let’s start with the bedroom which has a Camec hatch directly above the bed and, combined with double-glazed windows front and both sides, there’s obviously plenty of ventilation and natural light. There is abundant storage – three overhead lockers; two robes; two dressing tables, each with a slide-out drawer and cupboard; a corner cupboard, which houses the Brakesafe unit, below a 24in NCE TV and Winegard Freeview antenna; and another cupboard, with double powerpoints, above the TV, which is on a swivel bracket and can be viewed from the bedroom and lounge area.

The under-bed storage has two sections (one storing the portable footrests), and there’s also two Cree LED reading lamps and single powerpoints either side of the bed, plus an internal speaker and LED wide-area ceiling lighting.

An angled kitchen, opposite the lounge area, is fitted out for the camp chef and includes a stainless steel sink, flick mixer tap and water filter tap.

The full-height laminate benchtop offers reasonable food preparation space, which is further accentuated by the recessed Swift 500 Series four-burner combo with grill and rangehood. All that is missing is an oven to complete the picture.

There also are four lift-up cupboards of varying sizes above the cooktop, with the one above the rangehood guarding the electrical suite. Below the cooktop, a slide-out cupboard, fold-down compartment and slide-out pantry contribute more storage. And all cupboards are piano hinged, while the drawers are on rollers and have locking buttons.

While the two swivel chairs command the majority of the attention in the ‘lounge’, there’s still plenty of action in this zone. I counted five generous-sized overhead lockers, two of which are shelved, and another five compartments under the ledge, with two taken up by a 12V 40A BP-400 Electro, which senses the voltage of the battery and protects it from over discharge and resultant damage.

The lounge also comprises a long but narrow window, double powerpoint and USB port underneath a table, along with two reading lamps. Meanwhile, another hatch is positioned between the lounge and kitchen while an Aircommand Ibis low profile air-conditioner is located toward the front of the rear ensuite. There’s also a centrally located internal speaker and a CD/DVD sound system.

Safari badges this caravan as a member of its ensuite range, and you don’t have to be a Rhodes Scholar to work out why! It really is a bathroom with the lot, including a Camec 2.5kg top-loading washing machine neatly tucked away under the vanity benchtop, a washbasin, Thetford china bowl toilet, and the one-piece fibreglass shower directly opposite. Both shower and toilet have lighting and a hatch with 12V fan.

There’s also sufficient storage for items such as toiletries, with three slide-out drawers and two pull-out cupboards below the vanity, and a shelved cupboard high in the offside corner. The washbasin has adequate lighting and two lift-up compartments above, and there’s a mirror above the vanity and a sliding door latched to the floor.

You couldn’t be blamed for concluding that the brothers Trounce had thrown themselves a curve ball with their swivel chair concept. Such a radical whim has the capacity to polarise customer judgement and engender conflicting emotions. But, as I mentioned earlier, I reckon their instinct and forward thinking succeeds.

Certainly, it’s a positive spin on this Delta model, which represents good value for money at $61,490.

And that’s why a growing band of travel and outdoor enthusiasts are taking the Delta 20 Swivel Chair on their own caravanning safari.