I’ve been thinking a lot lately about getting away from the gentrified suburbs and going up-country, exploring our vast terrain.

While ideas are easy to come by, the real trouble starts when we try to work out what caravan would make the ideal home away from home. As luck would have it, just as I was daydreaming about the Cape or perhaps the Channel Country, Rhino Caravans sent me a cooee, with news of its offroad-ready Rhino Savanna designed for the rough and tumble of the great Aussie bush. So I headed over to Rhino headquarters south of Brisbane to see for myself.

In the Australian caravanning market, Rhino Caravans is a niche manufacturer, making only a handful of caravans every year. Rhino boss Martin Gray insists the company is about producing quality over quantity. 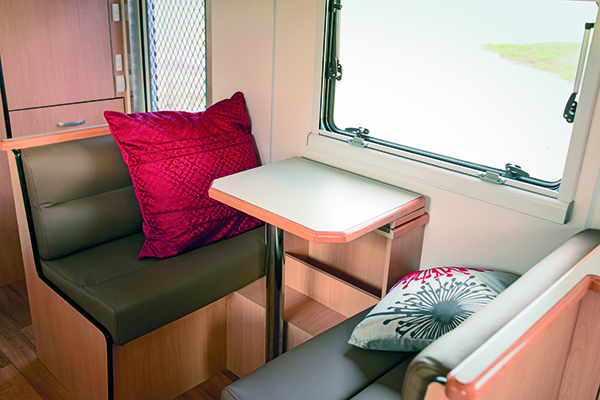 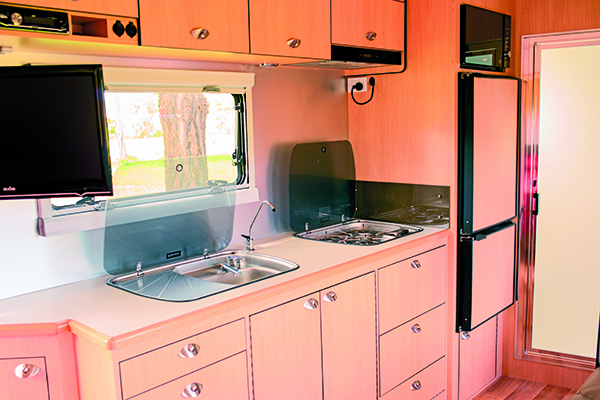 I arrived at Rhino Caravans expecting an impressive looking van; the sort of bespoke caravan that commands attention – much like the animal the company is named after. On that score, the Savanna didn’t disappoint.

While caravans typically present a pretty rectangular profile, the Rhino Savanna boasts a stepped front. From the hitch, the drawbar rises to hold an oblique utility box that flattens out to make the second step. The profile then steps up to a rooftop platform for an air-conditioner, although the owner of this van has opted out of air-conditioning leaving that space empty, while the final elevation provides ample headroom for the main living quarters. The complicated but fascinating profile tapers underneath at the rear to complement the high wheel arches and deliver a departure angle for travelling on uneven ground.

The stepped profile at the front is interesting as it provides minimum exposure of the drawbar to the ground at the hitch. The gain in clearance is assisted by the chamfered leading edge of the body up to where the chassis is level to the hitch. All in all, it’s an unconventional solution to the big issue of towing offroad on uneven ground.

For any van, but particularly an offroad van, weight is a paramount consideration. This one weighs in at 2450kg empty with an ATM of 3500kg.

With specs as shown that include three 80L tanks and a 65L grey water tank and a ball weight of 265kg with full gas cylinders, you are left with a reasonable maximum payload of 560kg for a few good bottles of red, a supply of steak, a good book or two, the fishing gear and more. There’s probably enough latitude here, with a little judicial packing, to keep sufficiently clear of the ATM for less impact on your rig and better towability offroad. When fully laden, a Toyota LandCruiser will do the job but it’s near its tow capacity. Larger vehicles like a converted American pick-up – say, the Ford F-Series, or even a heavy duty Dodge RAM would be better equipped.

For me, a good look around the outside starts underneath. The Rhino Savanna has a well made, sturdy-looking chassis that goes beyond the usual ladder-style. Instead, the chassis design cradles the body of the caravan, allowing the composite walls to sit within its frame.

The chassis offers better protection from side impact. However, I couldn’t tell how, if at all, this chassis design helps resist twist. Nonetheless, with 100x50mm main rails, it’s certainly strong.

The chassis rides on suitable tandem, independent Cruisemaster suspension, which is fine for offroad and blacktop touring.

At the front, the van has an Australian-made Vehicle Components DO35 hitch, which is among the most popular hitches and for good reason. As a drop on hitch, it makes it easier to couple on uneven or soft surfaces when you just can’t quite level the tow vehicle and the van.

Behind the hitch are two 4.5kg gas cylinders that, when full, bump up the ball weight by 35kg to the max of 265kg. Given we’re quibbling over a little bit of weight, it would be nice to have 9kg cylinders as they’re better for anyone interested in extended free camping. The trouble is, the larger girth of the 9kg cylinders won’t fit on the drawbar.

Next up is the utility box. It may be large enough for a small generator like a Honda EU20i. Unfortunately that’s speculation, as the review van had no gen set. Nonetheless, the box provides quality storage space and looks great on the drawbar. Two internal shelves make it easy to organise bits and bobs.

If the utility box doesn’t quite keep everything you want, a front tunnel boot provides extra storage space and there’s a jerry can holder on the rear. The tunnel boot appears smaller than many other tunnels I’ve seen but adequate for stuff like poles and fishing rods, ground sheets or tarps.

Behind the boot, a three-burner slide-out stainless kitchen with a sink promises outdoor cooking. It’s a handy bit of gear with a useful drawer for your cooking utensils. And when dinner’s made, a fold-down table gives you somewhere to rest your steak and beans.

The internal cupboards and drawers are made sturdy with 15mm eLite ply bonded with a maple laminate. The rear ensuite includes a toilet with a china basin and a toughened glass shower door.

As for the kitchen, many cooks would be happy as it features four burners and a stainless sink with a fold-down flick mixer. Nonetheless, some pedantic chefs with a hankering to whisk up a roux or braise a lamb shank or two might prefer more bench space. On the up side, there’s sufficient kitchen storage including cupboards, drawers and overhead lockers.

The kitchen-dining area also features a microwave, a large 175L fridge and a comfortable dinette. Those interested in a little entertainment will appreciate the built-in stereo with internal and external marine-type speakers pumping out your favourite music. There is also a LED TV/DVD combo for keeping up with the Game of Thrones or perhaps your favourite sport.

In case you do draw yourself away from the TV and are looking for something to do, there’s a handy washing machine secreted away in a cupboard by the door. You’ll walk past it every time you head off for the disc bowls tournament or to go fishing. The washing machine sits below a useful wardrobe-cum-linen store. Moreover, the machine’s in a handy position when you return a grubby from a hard disc bowls session. You can strip down at the doorway; throw your clobber in the machine and slip into the ensuite for a shower. Immodest, perhaps, but practical. The only trouble is the built-in wardrobe occupies the space that is typically set aside for a kitchen pantry. It represents the sort of compromise caravan designers have to make – good or bad – it depends on your priorities.

At the front of the review Savanna is a bedroom that includes reading lights, and beside and under-bed storage making it a comfort and practical space.

Power wise, the review van has two deep-cycle batteries producing 120Ah each, powered by two 150W solar panels on the roof with a 60A inverter charger. All up, this represents a good power supply arrangement similar to other vans designed for offroad adventure, albeit minus a gen set.

While we didn’t have the chance to really test out the Rhino Savanna in a true-blue offroad setting, this is a caravan with promise.

Well-built, sturdy, and priced on par with its competitors, this van looks ready to take the knocks and bumps outback adventuring inevitably dishes out.