Leaving the city canyons behind and delving into the thick, rich brown scrub of the Aussie bush is a challenge for any caravan, but the Trakmaster Pilbara Explorer is well-equipped for just such forays.

Generally, for offroad caravans, the smaller the better. So the Trakmaster’s relatively compact 4.32m (14ft 2in) body length and an upswept rear, affording a 40° departure angle, are definite pluses for offroad travel.

The hot-dipped galvanised chassis is 150x50mm along its full length, giving the Trakmaster a solid base. The lateral beams are set high on the chassis, with the benefit of better ground clearance through the centre of the van’s footprint. Trakmaster’s signature features on this van are cyclone tie-down points at each corner. In the tropical north, this is a feature you’d hope you never need – but one day, might just save the van. 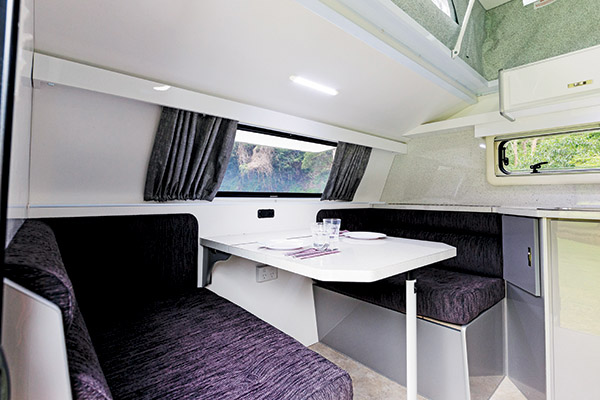 Given its offroad brief, the Pilbara has two rated recovery points at the rear chassis, again a feature you hope to not need but vital for a safe, uneventful recovery. Two MAXTRAX are fitted to the back of the van, giving another line of recovery defence.

Like most of its ilk, the Trakmaster has a Hitchmaster DO35 offroad coupling and heavy-duty stone protection for its two water tanks. The wheel arches are fully sealed in heavy-duty steel and gas cylinders on the A-frame are shielded as they sit just behind a meshed stoneguard.

Most premium offroad vans have independent suspension, but the Pilbara’s twin-shock trailing arm setup goes a step further, having load-sensing air springs. This feature also has side-to-side levelling, meaning that if you can’t avoid setting up on a side-slope, you can adjust the air suspension height side-to-side to suit the terrain. The stub axles are rated to 2000kg and are fitted with 12in electric brakes and rated alloy wheels shod with offroad tyres.

The underpinnings are capped off with a wind-down spare wheel carrier, a boon for tyre replacement with a wheel/tyre combination weighing as much as 40kg. Standard on the Pilbara are a wheel brace and hydraulic jack.

Trakmaster claims that the body’s fibreglass composite walls are 30 per cent thicker than a standard van’s walls, the argument being that they’re stronger and offer better insulation. The waterproof laminate floor is bolted to the chassis, adding to the Pilbara’s strength.

Storage is ample for such a small van; a large lockable toolbox on the A-frame is augmented by a small compartment, one each side of the van, and a pole holder integrated into the body at the rear.

Outdoor cooking is the better option to avoid lingering odours in a van, and is also a more social way of cooking – plus you get to enjoy the outdoors while you’re doing so. The stainless steel slide-out kitchen with sink and two-burner Swift barbecue unit on the Pilbara’s nearside is a great inclusion.

After opening the Trilock security door and lifting the pop-top, you’re presented with a front lounge, centre kitchen and rear bedroom layout.

The tinted acrylic windows are quite small and it’s only with the four meshed pop-top skirt windows open that the interior takes on a brighter feel. Mind you, the gloss-white wall finish and contrasting grey furnishings help make up for the small windows, to a degree.

There’s no reverse-cycle air-conditioning or shower/toilet inside but  there is a Fantastic 12V ceiling fan, an outdoor shower on the offside and an outdoor tent with porta-potti is an easy solution to the loo problem.

The walkway to the bedroom is wide through the kitchen area, making it easy for a couple to walk around each other.

The cafe dinette provides ample sitting space but when standing up, the angled, low bulkhead will cause a few sore heads until you remember to move to the edge of the seat towards the centre of the van before standing. There’s a good amount of storage at the front of the van, with lockers above and under-seat storage plus a locker on the offside wall behind the dinette seat.

The centre kitchen layout is unusual in that its benches are on both offside and nearsides of the Trakmaster. The single-tub sink with integral drainer sits on the offside bench, with the four-burner gas hob with grill alongside.

The nearside benchtop is, therefore, devoid of any such hardware and so presents an excellent food prep space. An EvaKool 110L compressor fridge is fitted below the bench.

The inner-spring mattress on the east-west mounted bed measures 1550mm wide by 2030mm long – a generous size that’ll keep the six-footers happy. Underneath the bed is a typical storage compartment, although much of it is taken up by the external barbecue slide and hot water system.

Power supplies when camping off the grid are one of the bugbears when caravanning, yet in the Pilbara they are well serviced. In fact, this is one of the most up-to-the-minute 12V power systems you can buy.

There are two solar panels on the roof that between them generate up to 270W, charging the most advanced battery you can buy, a lithium battery. This one’s rated at 160A and is managed by a Redarc system.

This is a solid caravan chock-full of offroad/remote camping goodness. While the lack of air-conditioner and internal shower/toilet might bother some buyers at this price point, there are certainly very few offroad caravans that have the Trakmaster’s brevity of weight, dimensions and abundance of 12V power to head out bush with.

This is a true offroad van which will go literally anywhere your fourbie can.