Another year and another Best Aussie Vans (BAV) entry for Lennie Mifsud and Melbourne’s On The Move (OTM) Caravans. This year, it’s with his commemorative 10th anniversary Vortex, designed for offroaders who like boating and fishing, like Mifsud himself.

A challenge faced by many Australian caravan manufacturers is making their models stand out from the crowd. In some ways, it’s pretty simple… just do something radically different! But that modus operandi comes with some hazards.

OTM’s 10th anniversary Vortex was designed using the company’s signature green and black colour scheme. There’s no doubt it’s striking, especially inside, but it’s not something all potential buyers will be happy to live with. I found it particularly interesting at the BAV Showcase, in Apollo Bay, to watch the reactions of those who went inside the van for a peek. Some stepped out quickly before it could be explained that there were always alternative colour schemes available and Mifsud had to move swiftly to get his sales pitch in. 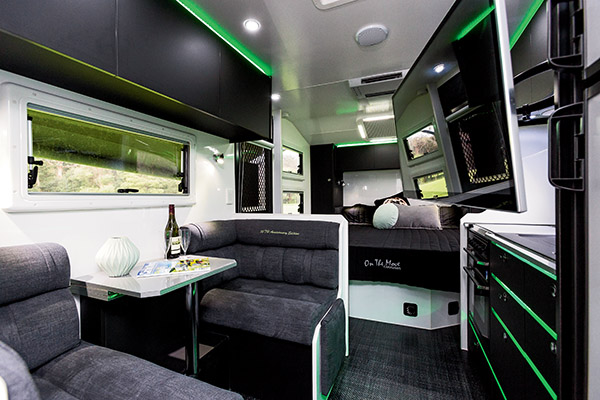 But those are the browsers that missed out as the Vortex, designed and built as an offroad caravan, is worth a lengthy inspection. Let’s consider a few of its basic statistics: 5.8m (19ft) external length; 2629kg Tare weight; 3500kg ATM; and 217kg ball weight. That makes it a bit shorter than many offroad caravans but with an impressive load capacity of more than 850kg. However, the ball weight could potentially get too heavy, depending on the way the caravan is loaded.

OTM has built the Vortex without a standard frame, instead using a polystyrene composite wall structure with fibreglass on the outside and a one-piece fibreglass roof. The composite uses a honeycomb structure, which is designed for strength and light weight. And that same philosophy is also applied to the one-piece floor.

The hot-dipped galvanised chassis has been designed in a similar way using 150x50mm (6in x 2in) C-section and infills (all with large holes punched out to reduce weight but maintain rigidity). Up front, the drawbar has a radius shape and is a continuation of the main rails, rather than being welded on. The box section structure is 50x50mm (2in x 2in) and the bumper bar is bolted on at the rear.

Unusually, the spare wheels are mounted on the drawbar rather than the bumper bar, due to the fittings for a boat trailer and boat motor at the rear of the van. But the lower drawbar location makes them easier to lift on and off!

AL-KO independent torsion suspension is fitted to the 16in alloy wheels. That’s an interesting step away from traditionalism but there is still plenty of ground clearance for offroad work.

Both 95L fresh water tanks are mounted above the axles, while the grey water tank – yes, there is one fitted – is mounted further forward. It looks a bit cluttered in the chassis section but a closer look reveals everything strapped up out of the way.

A quick spin around the outside of the Vortex reveals quite a few interesting features. The raked profile of the front wall is built with a slight overhang, under which is a massive storage box (there isn’t a conventional front boot) that’s accessible from both sides. In addition there is a small tunnel boot above that. There are yet more storage bins at the rear and an impressive camper trailer-style slide-out kitchen at the front. The kitchen is quite sophisticated – not only does it have a washbasin and two-burner cooktop but also a small Weber barbecue. The eagle-eyed might notice there’s

no latch on the storage compartment, just a finger hole.

There’s a couple of hatches on the mid-offside; the lower one houses the battery management systems and mains circuit breaker, while the upper one is for fridge ventilation on hot days.

There are certainly plenty of LED lights around the outside of the Vortex – two on the awning side, one offside, and two reversing light bars which are very useful at night when used in conjunction with the reversing camera.

The Vortex has all the good electrical gear it needs to do its jobs – two 100Ah lead crystal batteries, two 150W solar panels and an Anderson plug connection are all designed to give the van plenty of remote travel capability. Lead crystal batteries are claimed to give a better performance than standard deep-cycle batteries. But there is a penalty – amp for amp, they are heavier than their deep-cycle alternative. Mains powerpoints are fitted in all the expected places, and 12V/5V USB outlets are fitted beside the bed and also on the fridge cabinet by the kitchen bench but not by the dinette table.

Inside the 10th Anniversary Vortex, the thing that hits the eye in this front bedroom/rear bathroom layout is the black cabinetry and green LED strip lighting. As I previously noted, it’s not for everyone and while I liked the green lighting, I’d be opting for different coloured cabinetry.

All the cabinetry is CNC machined, so everything fits together neatly. In addition, all the drawers have ball bearing runners and have soft closing mechanisms – a nice touch of luxury.

Given the van’s length, a forward door entry was necessary and that ensures that getting around the front island bed isn’t too difficult – although when the bed is fully extended, it almost butts up against the offside kitchen bench. Instead of a large window on either side of the bed, OTM has opted for two stacked windows instead. The advantage of this arrangement is that while light and air levels are maintained, the small windows make it more difficult to break into the van.

The rear bathroom is elegantly appointed and comes with the full monty: a nearside shower cubicle; an offside cassette toilet; and a well kitted out vanity cabinet that includes a washing machine and good-sized wall mirror.

Designed to fit into the required space, the kitchen bench is a little shorter than usual but comes with a sink/drainer unit alongside a four-burner cooktop with grill and oven. Between the end of the kitchen bench and the bathroom wall is where the generously sized Waeco 190L fridge is located. The microwave oven is mounted in the overhead lockers above the sink, rather than above the fridge. An advantage of the external kitchen is that in warmer weather much of the cooking can be done outside, leaving the inside for the lighter catering duties or in foul weather.

Opposite the kitchen, the dinette has both back and side cushions, and hinged footrests. It’s not large but will seat two people without any difficulty. Overhead lockers are fitted in the air space above, and there’s also a tri-fold table.

The 10th Anniversary Vortex is a striking caravan, even without the green and black colour scheme. Built specifically with offroad travel in mind and fully appointed for that purpose – everything from the chassis structure to the grey water tank – the Vortex is a caravan ready to go!