Jurgens caravans are distinctive in the Australian RV scene. They are assembled outside of Melbourne but their body construction and chassis work is much more European and a just a little bit South African, given Jurgens’ parentage in that country.

The Lunagazer J2405’s chassis provides the first clue to the overall Jurgens approach. Instead of the more common 150 or 100mm (6in or 4in) main rails and 50x50mm (2x2in) cross members ( all in RHS), the main and drawbar rails are all 150mm (6in) C-section, joined together with much lighter cross members. Most of the steelwork is up front and around the Al-Ko IRS suspension mounts, with a much lighter framework at the rear. It’s all hot-dipped galvanised and mostly bolted together rather than welded. Two 60L water tanks sit above and forward of the axles. The spare wheel is mounted between the chassis rails at the rear and, for those who don’t like crawling under the van to get the spare wheel out, it can be lowered from the rear.

In case you think this style of chassis is a bit on the light side, it’s worth noting that, like many Euro vans, part of the van’s strength is built into the body. The 23mm-thick composite Duratherm walls comprise an aluminium outer skin, 20mm high density foam that includes a structural matrix for strength and a plywood inner-skin. The front and rear panels are moulded fibreglass, and the roof is a Uniskin construction – one piece to minimise the possibility of leaks. With the spare wheel out of the way and the two gas cylinders stored in a compartment in the front boot, the overall look of the front of the van is quite clean and streamlined. 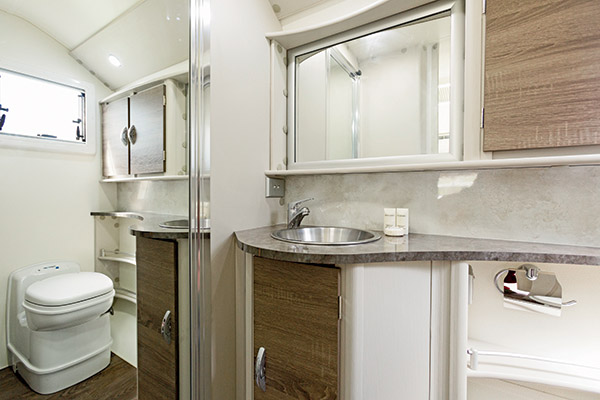 It’s designed for strength and light weight, which can be readily observed from the low Tare weight. At 6.33m (20ft 9in), it comes in at 1741kg – lighter than its contemporaries and all those in its category at Best Aussie Vans.

Stepping into the J2405 via the rear door reveals a front bedroom and full-width rear bathroom layout. What you also discovered, if you didn’t notice from the outside, are the large windows. They, along with the large rear hatch, allow for an incredible amount of natural light and, especially in the front bedroom, a very spacious feel to the van.

The Lunagazer is also well-appointed with reading lights, under-locker lights and ceiling lights fitted to the roof hatches and air-conditioner – all LED, of course. I thought it odd that the master switch is located at the base of the front dinette seat, not more readily accessible by the entry door.

The kitchen zone is a generous size – which is an interesting, and appreciated, shift from European design thinking – and is well kitted out with cupboards, open shelves and good-sized drawers. There are overhead lockers as well, a little unconventional being side, not top, hinged. Like the rest of the van, the cabinetry suffers from an excessive amount of wall screw/fastener covers.

Included in the kitchen arrangements are a stainless steel sink/drainer and a four-burner cooktop/grill. In the corner against the bathroom wall, the microwave oven sits above the Thetford 177L fridge.

Across the way, the cafe-style dinette has been designed with comfort in mind, with the seat cushions, including those against the wall all being contoured. The tri-fold table can be moved in and out as needed and under that are a couple of shelves and a powerpoint. The dinette is certainly spacious enough so that two people don’t have to sit on top of one another and that space also allows for a couple of cupboards and shelves to occupy the space above.

There’s definitely no shortage of general storage in this van and that includes the bathroom wall by the entry door that’s kitted out with a couple of narrow cupboards.

Moulded fibreglass is used for the shower cubicle, and part of the moulding not only includes a couple of soap holders but also a seat – very handy for those who have difficulty bending over in the shower, or just like to have a rest in there! Cassette toilets are squeezed into corners but this one, fitted to the nearside, does have a fair bit of elbow room, aided by the curved shelves and benchtop along the rear wall. Additional fittings include a vanity cabinet complete with washbasin, towel rails on the door and a mirror door shaving cabinet. The shower cubicle door is also mirrored, so a top-to-toe clothing ensemble inspection is quite easy. In keeping with the rest of the van, a large window is fitted to the wall above the loo.

In a variation on a theme, the bedhead cabinetry is utilised for mounting part of the entertainment unit, the radio/CD player and stereo speakers. It’s not a bad location because audiophiles will get a reasonable stereo effect but adjusting the radio in any way does mean clambering on the bed to do it. You also get all the normal features – overhead lockers, side wardrobes and bedside cabinets, but they are not as deep as is often supplied these days. Lifting the 1.84x1.46m (6ft x 4ft 10in) mattress gives access to the generous storage space underneath the bed. Oddly, the air-conditioner (an Aircommand Sparrow) is located above the bed, and not in the centre of the van.

Jurgens’ Lunagazer J2405 has the preferred modern layout (front island bed and rear bathroom) but it’s built a little differently to the conventional style, with its C section chassis and composite body construction. That results in not only a lighter weight caravan but one with a European styling, still built in Australia.