Caravan model names are a quirky interest of mine. Some have obvious names, others evocative and those that make me wonder what the manufacturer was thinking about. The newly released Snowy River range grabbed my attention, because I quite like the high country Snowy River region. It created an instant bond, followed by a phone call to the Snowy River, Qld, dealer Green RV to arrange a review.

There are several models in the Snowy River fleet, including a family and slide-out model, but my van of choice, the SR-15, is the smallest in the range. It’s a single-axle, 4.9m (16ft 1in) van with a 1975kg Tare weight, which pushes it well and truly under the Prado limit. An unladen 170kg ball weight and 2275kg ATM, which gives a load capacity of 300kg, are other vital statistics. 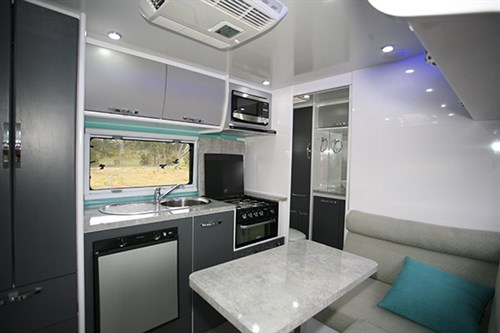 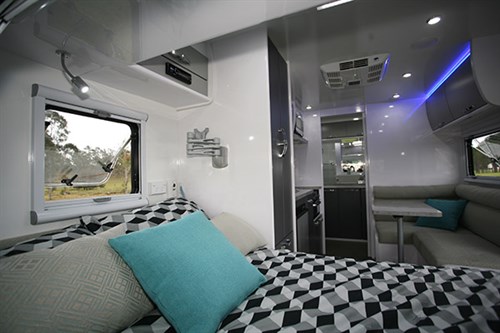 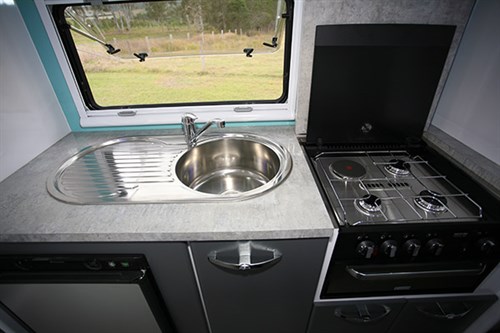 The SR-15 certainly tracks along very nicely on the road. And there is minimal difference in tow combination handling on dirt roads or bitumen. Its relative light weight made it a pleasure to tow but the shorter length did make reversing around a little twitchy.

Although the SR-15 has its origins in the Regent factory, its comparative light weight provides a small clue that it might be constructed differently to the conventional method. Indeed a peek under the van reveals a conventional 100x50mm (4x2in) RHS DuraGal railed chassis, but there’s a lot less cross members than is usual. Also the suspension is an independent rubber torsion setup, rather than the more conventional leaf spring arrangement. And the water tanks are mounted between the chassis rails in standard fashion. Eagle-eyed readers might notice that there is one water tank fitted but all future models will have two.

A welded aluminium frame is used for the body structure with the cladding being vacuum bonded sandwich fiberglass composite, the same material being used for the inside walls as well. The roof and floor are one-piece and made from the same material. In keeping with contemporary colour schemes, the lower waist has a covering of black checkerplate all round. Given the rather streamlined look that the front wall has, a conventional front boot wouldn’t work too well but the front tunnel storage is a nice substitute. It’s not oversize but should easily accommodate all the caravanning essentials. To save some space, the battery box is welded to the chassis rail in front of the offside wheel.

In a van of this length, there isn’t really going to be enough room for an island bed at one end, if there is a full-width bathroom at the other. In many ways that’s indicative of how van design priorities have changed in recent times. A decade ago, caravans had a small shower/toilet combo unit, if they had any sort of bathroom at all, and an island bed. Nowadays, like the SR-15, the island bed is dispensed with in favour of an east-west double bed across the front of the van and there’s a full-width bathroom across the rear. Fitting in between is of course a kitchen bench, an L-shaped dinette and a full-weight wardrobe opposite the entry door.

Starting with the bed across the front, making the most of the available space it measures 2.06x1.43m (6ft 9in x 4ft 3in). That length is a distinct advantage over most caravan island beds. Windows all round and a large roof hatch offer plenty of light and ventilation. Above the bed on all three sides, overhead lockers can easily be used for storage, just like the two drawers under the bed. Single LED reading lights are fitted to either end, giving a choice of where the pillows go but the swivel-mounted TV fitted to the side of the wardrobe would suggest the nearside end for TV viewers. However, clambering over your partner’s legs for the person sleeping by the wall might be easier if the bed was the other way! Your choice!

There are no surprises in the kitchen department which comes with a Thetford four-burner Minigrill and a stainless steel sink. The 60L Dometic fridge would certainly be described as being on the small side but future SR-15 models will have a more generous 93L capacity, albeit losing the floor lockers. Given the rather limited cupboard capacity, considering that’s where the hot water heater and water pump are to be found, it’s good that the two overhead lockers are a nice deep size.

Although a set of extra shelves in both wouldn’t go astray. A Daewoo microwave oven is positioned above the cooktop with a flush top, but a slight problem is that it partly sits in front of the wall powerpoint when open.

Given the shorter length of the SR-15, it’s not really news that the L-shaped dinette with its almost rectangular table is the size it is. Yes, it will seat two people without too much trouble but be prepared to compromise a bit. Two overhead lockers offer the usual storage above the dinette.

Generally speaking this is quite a neat little van. With the relative short length, there are going to be few compromises in the kitchen/dining zones but they are only to be expected with what is offered in the overall design. It is of course ideal for mid-sized tow vehicles and a great towing proposition.

Oh, and one more thing which I haven’t mentioned until now. It’s fully built in China. It does of course have all Australian spec components like the fridge and cooktop and is built to Australian requirements. A close look does reveal sections like some of the chassis welding and internal build techniques which are not the same as seen on an Australian van but having looked at a few caravans built in China, as well as quite a few camper trailers, it’s one of the best I have seen to date! Interesting times ahead I’m thinking!