It can be hard to stand out from the pack, but New Age Caravans has gained a reputation for building vans that are a little different to the norm, which is a good thing in what is quite a crowded market. One of its latest offerings, the Gecko, is a testament to that, with its expanding front bed. Although not a new idea in itself, it offers the benefit of a decent living area in a relatively short caravan.

My review Gecko was the 14ft model, which actually has an external body length of 4.8m (15ft 9in). It sits in the middle of the Gecko range, which also includes 13ft and 16ft models. One of its major assets is its low weight, with a Tare of 1650kg and an ATM of 1950kg.

Aside from the fold-out front bed, the van looks quite conventional from the outside with a forward entry door and Dometic acrylic double-glazed windows. There is no a front boot due to the fold-out bed, so external storage is provided by a tunnel boot, which isn’t huge and is something to keep in mind when packing. 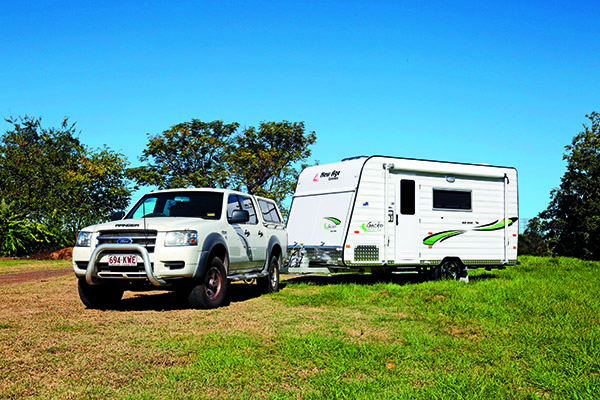 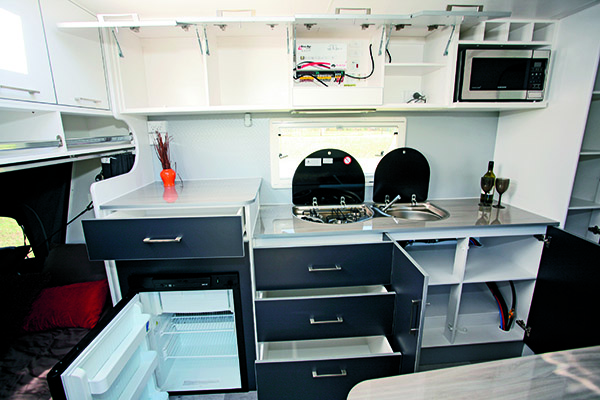 The Gecko has a meranti timber frame and aluminium cladding. Underneath, the 100x50mm (4x2in) railed chassis has punched hole C-section cross members. The single 80L water tank is mounted just forward of the beam axle with its leaf spring suspension and alloy wheels. These days, most vans with showers have a larger water tank capacity, but this wouldn’t be an issue for buyers who plan to spend most of their time in caravan parks.

New Age offers a surprising number of options on the Gecko, which helps to keep the base price down, however, a few of these items – particularly the 100Ah battery and the roof-mounted air-conditioning – are considered standard fittings on nearly all vans these days.

On the road, I found the Gecko to be an easy towing companion thanks to both its weight and towing length. The Ford Ranger I towed it with was a few models old, and it certainly handled the caravan without any trouble.

The Gecko 14ft layout is remarkably spacious for a relatively small van – aided, of course, by the space-saving extending bed. This leaves a decent  amount of room for an offside kitchen bench, a nearside L-shaped dinette and a full-width bathroom across the rear – something that would have been extraordinary in any van, let alone a van of this size, just a few years ago.

Although setting up involves a little more work than a conventional van, it doesn’t take very long at all. From the outside, it’s simply a matter of opening the front panel and lowering the bed base. Once the exterior is folded out, the high density foam mattress, which measures 1.9x1.5m (6ft 3in x 4ft 11in) and folds in two for travel, can be unfolded and laid out. Of course, making the bed up each night does take a little longer but, if that’s an issue for you, something like a double sleeping bag inner sheet or a Duvalay would speed up the process.

Single reading lights are fitted at either end of the bed, so you can take your pick as to which end you put your head but, either way, the person sleeping on the outer side won’t have to have a light. Screened canvas windows are fitted all the way around which provides good cross-flow ventilation.

Given the fold-out design, there is no bedroom storage around the bed itself, but overhead lockers and a shelf across the van’s front wall offer a fair bit of storage space, complemented by a three-quarter height cupboard by the entry door, fitted with shelves.

A noteworthy feature in this van is the relative size of the kitchen bench. It’s larger than I have seen in much longer vans and has been achieved, in part, by fitting a combo three-burner cooktop and sink in the benchtop and a Thetford 93L fridge under the bench. This leaves a reasonable amount of free benchtop space, including another raised portion above the fridge.

There’s an adequate amount of storage – four good-sized drawers and a double cupboard. Part of the generous overhead locker space has been taken by the microwave and the 12V power supply, but there’s still space for your kitchen items and there’s even a wine bottle rack above the microwave.

Given the available area, the L-shaped lounge works well, with room for two around the table without too much difficulty. If you require a bit more space, one side of the table can be folded down. Above the lounge are the usual overhead lockers, as well as the radio/CD player, while the under-seat storage areas are accessed by floor lockers at both ends of the lounge.

The bathroom is surprisingly large for a van of this length and is kitted out with all the features you’d expect, including a nearside shower cubicle, a vanity cabinet across the rear and an offside cassette toilet. Given the space constraints, a bit of thought has been put into the vanity cabinet storage, which consists of a two-door cupboard, open shelves and an open area beside the toilet, the base of which lifts to give access to the Suburban 23L water heater.

Overhead lockers run across the rear wall and the bathroom ventilation is handled by two ceiling vent fans and a window above the toilet. It all fits together very neatly.

The Gecko 14ft is a nice little package and has the dual benefits of being a short van for easier towing but with a spacious interior thanks to the fold-out bed.

Sure, there isn’t the sought after island bed, but this van has everything else you’d want at a good price, and that makes it a very attractive touring proposition.