It’s been a while since we’ve looked at Jayco’s premium pop-top, the Journey. For the 2016 model year, it’s been given a spruce-up inside with new fabrics, while outside, Jayco has splashed new graphics along its flanks.

The Journey is built on a hot-dipped, galvanised chassis, which is well made with no weld spatter or rough joints. The C-channel lateral supports have cut-outs, which help to reduce weight, and the A-frame has a centre-mount jockey wheel, making life easier if you use a weight distribution hitch (WDH). The A-frame rails themselves have nothing getting in the way of WDH C-clamps except for an external tap, which is set back a fair way anyway. Not that you’re likely to need a WDH, as the ball weight is only 113kg at Tare and you’ll probably only add another 40kg to that with a payload. 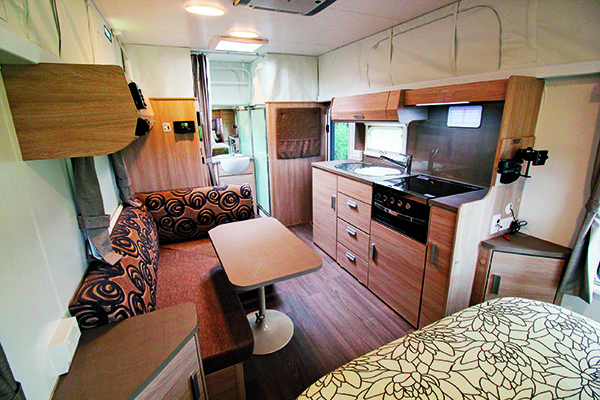 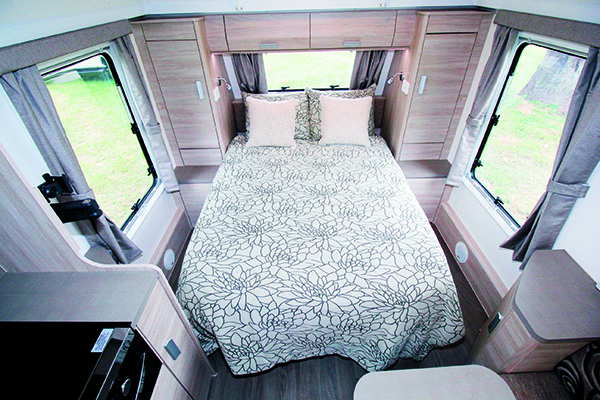 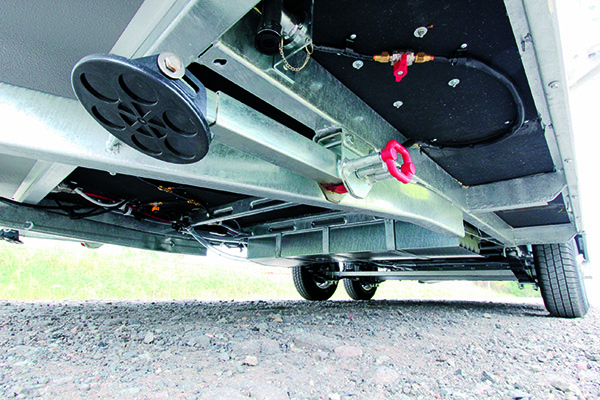 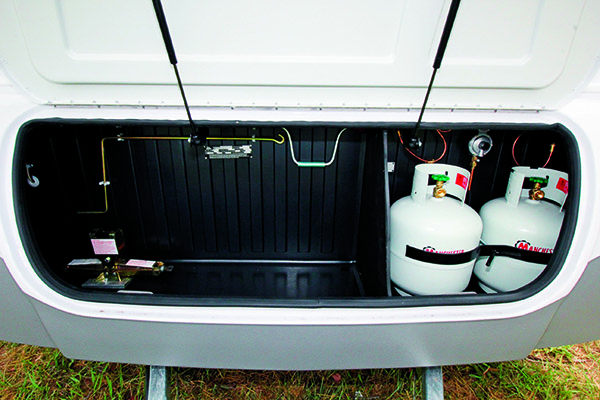 The Journey towed very well behind the Isuzu MU-X – it didn’t pitch or sway and its cut-in on corners wasn’t excessive. The relatively clean drawbar design means tight U-turns were also easy to negotiate.

The two 82L water tanks are mounted each side of the wheel set, which augurs well for good weight balance. The gas plumbing is tucked up well out of harm’s way. While sealant is the only way to ensure the pipes and wiring going into the body doesn’t bring in dust and water, Jayco hasn’t gone overboard with it like I’ve seen some manufacturers do. Some of the water hoses could be better tucked away, though, with a few a bit too exposed for my liking.

The Journey’s aluminium-framed, composite external walls look neat and are a welcome step away from corrugated aluminium sheeting. The white over grey decor is conservative, yet details like the smooth walls and moulded rear wall housings (which encase the LED tail-lights) give the overall effect of a modern-looking van. The alloy spare, encased in a neat plastic cover, is mounted low on the rear wall, making it easier to remove and refit. Under the spare is a tubular rear bar, which won’t protect the spare wheel cover from rear damage but does give the lower body good protection.

The fibreglass pop-top roof section is large, encompassing the whole roof up to where the front begins to curve down to the front panel, where an opening window, with mesh screen and blind, is fitted with a gas strut-assisted shield.

The external features are fairly simple here, with nothing you’ve not seen on a pop-top before. External storage is limited to the front boot, in which two 9kg gas cylinders are fitted with a wall separating them from the storage area. While fitting the gas cylinders in the lockable boot is good for reducing the chance of theft – and making for a cleaner-looking A-frame – they do take away potential storage space.

The pop-top is raised by Jayco’s Easy Lifter canopy lifters, one at the front and one at the rear. Because the roof has the air-conditioning unit fitted, it is quite heavy, so lifting it is not exactly a one-handed operation. But once the roof has been lifted into position, there’s generous headroom inside.

The white vinyl skirt adds to the bright feel of the interior and has four zippered, meshed windows – one on each side. The ceiling has a large hatch, screened and meshed, LED lights and the centrally-mounted air-conditioning unit. Double-glazed push-out windows with roller blinds and mesh screens line the van, and the ones in the dinette and bedroom also have curtains with pelmets.

The kitchen is on the nearside, just to the left of the entry door. It could do with more storage and food prep space, although, in a 17ft pop-top you’ll always have space compromises.

There’s a storage locker above the bench and two below. Then there are three ‘Ezi-glide’ drawers (including a large pot drawer) and a small pantry cupboard. The drawers have simple pull-release handles but the runners are not quite as smooth as they could be. The kitchen bench has almost no free bench space, unless you count the sink drainer. However, with the cutting board over the sink and the glass cooker lid closed, you’ll have most food prep requirements covered.

The stainless steel single-bowl sink has a mixer tap which is fed from either mains pressure or from the two 82L tanks via a 12V pump. There’s an inline filter and, of course, hot water drawn though the 22L-capacity gas/electric heater.

Forward of the fridge and microwave is the L-shape dinette. In this case, the dinette table can be removed and re-fitted as a bed base, meaning the Journey has the potential to be a three-berth van. The table itself is a good shape and size for getting around it and the lounge cushioning is comfortable.

There’s storage space under the seat bases, too. On the seat base front panel there’s a two-pole 240V socket outlet and Setec power converter. The 240V circuit breaker is also mounted on this panel – perhaps not the most convenient spot for it. Above the dinette there are overhead lockers as well as the audio system and the control panel for the water and battery levels.

Moving on to the front bedroom, the 1.88x1.35m (6ft 2in x 4ft 5in) island bed is ensconced in a generous cupboard space. There are two lockers above the bed, a hanging wardrobe and a lower drawer and cupboard on either side, and triangular corner cupboards at the foot of the bed. There’s a TV bracket mount and antenna plug on the nearside back wall of the bedroom, where there’s also a two-pole 240V socket outlet.

There’s enough room to step around the island bed and lighting is covered off well with a reading light on each side of the bed and an LED dome light on the ceiling.

The bed lifts on gas struts to reveal a reasonably deep, wide and long storage space. The onboard battery and 12V water pump are also housed in this space, which does encroach on the available storage but also makes access to these vital components very easy.

Finally, there’s the bathroom, at the tail end of the van. There’s a separate shower cubicle on the nearside, a vanity unit in the centre against the back wall and a cassette toilet on the offside. For a 17ft van, it is surprisingly roomy; you don’t feel like you’re squeezed in at all. The vinyl skirt of the pop-top has provision for enclosure of the bathroom, which works well enough but is another thing you have to fiddle with.

While more external storage, more open kitchen bench space and an easier pop-top operation would be nice, the fact is that the Journey is good value for money, well-balanced to tow and well-featured throughout. That its layout is also so well-balanced, with good space provision in the bedroom, bathroom and living area, only adds to its appeal.