Anyone who has studied a language will know that most are full of short-cuts that are hard for a non-native speaker to grasp. For instance, when someone says “I’m just getting a rego check done on my car”, we all know what that means.

Likewise, when we went to pick up this review River Diamantina from Parravans Caravan World at Windsor, NSW, it had a label stuck on it which said ‘Prado Friendly’, I knew what that meant, as would many towing folk. But, to non-towers, it might be more of a mystery. Basically, it means that the caravan can be legally towed by the popular Toyota Prado, which has a maximum towing capacity of 2500kg.

But just so everybody’s clear, it means the fully-loaded weight of the caravan is towable. So to allow for personal effects and full water tanks, the Tare weight of a ‘Prado Friendly’ van has to be around 2100kg or less. Happily, that is the exact advised Tare weight of the Diamantina caravan I was there to inspect. 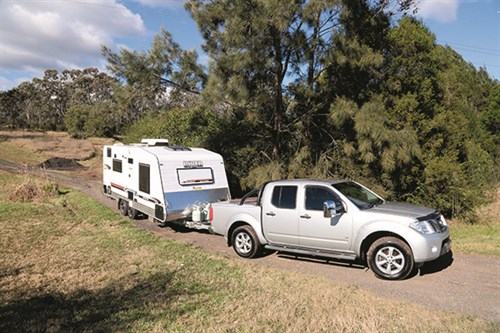 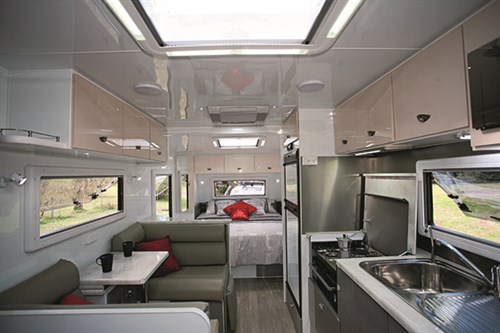 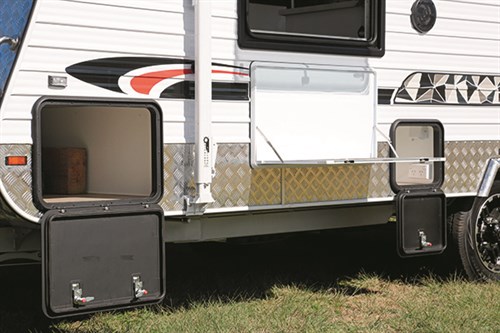 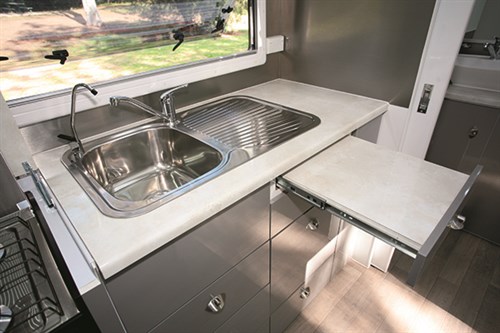 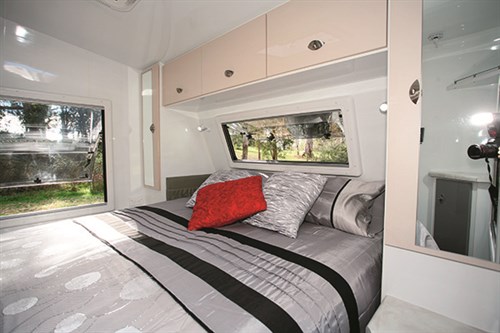 All that is worth mentioning because this 6.2m (20ft 4in) River Diamantina comes with the caravanner’s current popular layout of choice – a front bedroom and full-width rear bathroom – which often results in a van over the Prado’s limit of 2500kg.

However, this van manages to stay within the Prado limit. It is built in a very conventional style, with a G&S SupaGal chassis with 100x50mm (4x2in) main and drawbar rails in a standard box section style, although there are a few less cross members than normal, and a battery box is fitted to the front offside rails. Tandem-axle roller rocker leaf spring suspension is fitted to the 15in wheels and both 95L water tanks are mounted forward of the wheels.

A spare wheel mount is also fitted to the chassis, behind the drawbar, but Parravans has opted to make that more accessible by fitting a second wheel holder to the drawbar rails where it is easier to get at. Although the sub-chassis seemed to be pretty busy, there wasn’t anything hanging down, vulnerable to rock strike, where it shouldn’t be.

Atop the chassis, the body has a timber frame with insulation and white aluminium cladding. The lower waist is covered by polished aluminium checkerplate. Aussie Traveller supplied the security screen door, and the double-glazed acrylic windows with integrated screen and blind were from a Chinese supplier rather than via Europe, like many are. The window catches did seem a little flimsier than normal and had a plastic feel about them.

Stepping in through the entry door, the bathroom is to the rear, and there’s a dinette on the nearside with a kitchen bench opposite. As I mentioned previously, the island bed takes pride of place up front. The van is fitted out with light and bright decor, along with large windows which ensure the interior is well lit by natural light. Well-placed LED downlights and strip lights kick in after dark to maintain illumination.

In the bathroom, there are no real surprises. The de rigueur layout includes a nearside shower cubicle, offside cassette toilet and centre vanity cabinet. A full-height cupboard is fitted into the rear corner by the loo, and it does make things a bit tight around the toilet. There are no access worries to the lower section, though, because that is where the hot water heater is located, and the upper section is nicely fitted out with shelves. A top-loading washing machine sits inside the cupboard beside the wash basin and there is a wall mirror above the vanity.

The kitchen fills up just about all the mid-wall space. In a deviation from the norm (probably for weight reasons), the 181L fridge is located at the bed end of the kitchen bench, not butted up against the bathroom wall which is the more common placement. A four burner cooktop/grill and a stainless steel sink and drainer take up the rest of the bench. In addition to deep overhead lockers, storage can be found under the bench which has drawers plus a wire basket pantry.

Although there is reasonable benchtop space, a little bench extension can be slid out from under the sink drainer – it’s a neat and simple idea and gives you more room for meal prep. The microwave sits in the overhead locker above the sink. The large window behind and the rangehood ventilates the kitchen quite well.

Across the way, the café-style dinette will suit two people without too much trouble. In addition to padded back rests, there are hinged foot supports and inwards facing drawers, which are a much better idea than wrestling with seat cushions and ply hatch covers. Extra storage space is supplied by a narrow cupboard under the tri-fold table.

If I can make a sweeping statement, like many of us do, I think caravans could generally do with losing a bit of weight.

I know more than a few people would like it if Toyota increased the maximum towing weight of the Prado, but they keep it at 2500kg for good reasons. So it’s good to see that a manufacturer like River has taken the step of dropping a few kilos to meet the popular ‘Prado limit’ without doing away with any of the features we have come to expect in a contemporary caravan.