The Jayco name certainly needs no introduction. To say the company is well enmeshed in the Australian RV industry, with a claimed 170,000-plus RVs built over the last 40 years, would be an understatement. And among the manufacturer’s extensive offerings is a large range of motorhomes, which it has been building for around a decade.

On a recent trip to Bathurst, NSW, to attend the Campervan and Motorhome Club of Australia’s (CMCA) 30th anniversary rally, we managed to get our hands on the latest Optimum IV.28-5 – the largest and most luxurious of the Jayco fleet. Built on an Iveco Daily cab chassis, the 8.7m (28ft 7in) Optimum has received an upgrade in its latest incarnation, and features a large offside slide-out that encompasses the bed and dinette, as well as new fixtures and fittings.

It’s an impressive and somewhat imposing rig, with its silver cab, white fibreglass body, and silver and black decals. It certainly drew a crowd when we pulled into the CMCA rally at the Mount Panorama race circuit. 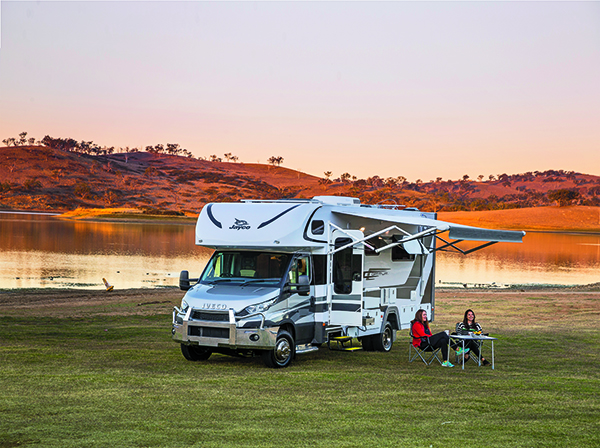 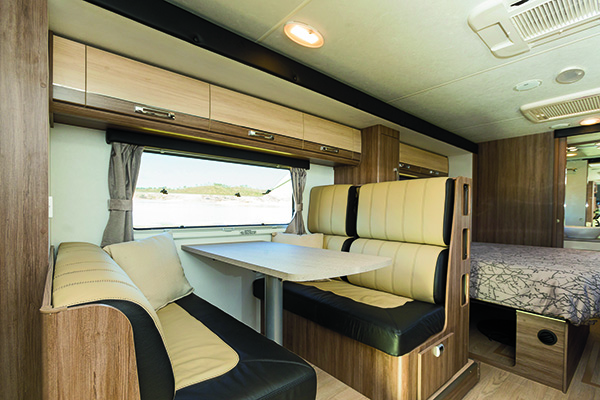 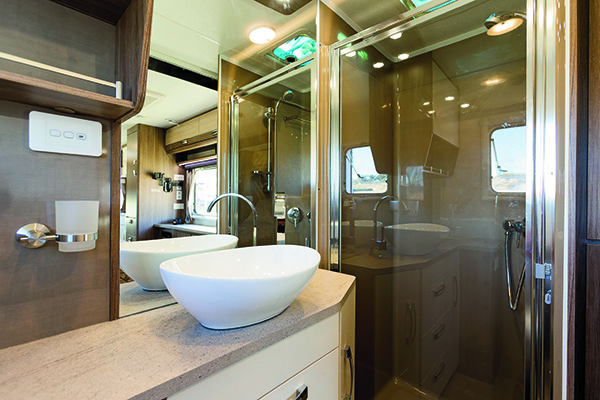 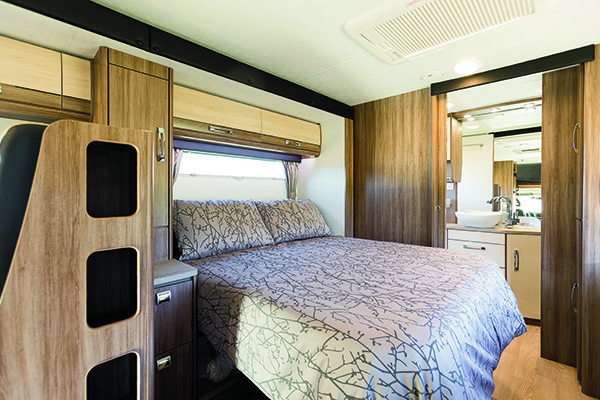 The Optimum is big – there’s no way around that – and with its 5000kg Tare and 7000kg GVM, it requires a Light Rigid licence to drive it. But don’t let that put you off. Aside from requiring a little more consideration when it comes to tackling tight corners or overtaking, once underway, its size is not overly noticeable.

The cab is comfortable and spacious, and visibility is quite good – aided by decent side mirrors and a rearview camera. The Iveco’s eight-speed, fully-automatic 3L turbodiesel (also available in a more powerful bi-turbo) handled well on our test at Mount Panorama and along the winding country roads around Bathurst, changing down gears nicely to decelerate down hills and with enough grunt to get back up again. We did notice a fair bit of creaking when underway, though, which can sometimes be the case with slide-out models, and which made for a slightly noisy journey.

Of course, it’s this same quality – its size – that adds to the comfort and convenience of the Optimum once you’re at camp. The 4.2m-long, 550mm-wide offside slide-out adds a fair whack to the internal living space, while the Optimum’s 8.7m length means there’s plenty of room for storing all your camping essentials. And it’s in this regard that the Optimum really excels, with no less than seven big storage bins around the outside and plenty of packing weight to play with. Each storage bin has its own LED light, making fumbling around in the dark less of an issue if you happen to arrive at camp a little late.

In addition to the plentiful storage compartments, the nearside is home to a slide-out barbecue, a drop-down picnic table, an external shower and an entertainment hatch with an extending arm for a TV, as well as an electric Carefree awning with LED strip lighting along the outer edge. In other words, the Optimum is well-suited to sunny days spent in the shade of the awning and evenings relaxing under the stars.

On the offside, a rear hatch plays home to the Cummins Onan 3.6kW generator while the adjacent locker gives over some of its storage space to the accompanying fuel tank. Also on the offside is a dedicated hatch for the two 4kg gas cylinders as well as one housing the toilet cassette.

The Optimum is badged as a luxury motorhome and comes with all the expected bells and whistles. To the right of the forward entry door, with its separate mesh-screened security door, are a nearside kitchen and offside dinette. Towards the rear is the east-west bed with a low wall of wardrobes stretching along the nearside at the foot of the bed. For short stops, there’s enough room to use the dinette with the slide-out closed and you can still access the full-width rear bathroom by lifting up the mattress on its gas struts, which creates a small corridor. The struts did seem a little weak, though, and it took a bit of fiddling to get them to hold the weight of the bed up.

Above the front cab in the Luton peak is a second double bed, accessed via a clip-on ladder, which brings the sleeping capacity of this Optimum to four. This bed also lifts on gas struts, which provides easier access to the front cab from the living area and also makes it feel more spacious and open in the cab when you’re on the road.

Windows at either end of the Luton peak bed provide light and ventilation and a mesh shield clips up along the outer edge – a handy addition to stop the kids from rolling out of bed. The angled front of the Luton peak could make it a little claustrophobic up here for a couple of adults, though.

The position of the Iveco Daily’s handbrake means the cab seats don’t swivel easily, so rather than attempt to combat this, Jayco has chosen to keep the cab separate from the living area. While it’s nice to have the option of additional seating, it isn’t a huge issue in the Optimum as there’s still plenty of living space. One omission I did notice was the lack of curtains across the front to close off the cab for privacy at camp. However, I am told the Optimum comes with a blanket-type cover for the windscreen that is held on by suction caps.

The kitchen is well set up and practical, although, given the Optimum’s overall size, it is slightly lacking in bench space. The lid of the four-burner cooktop sits flush with the bench, though, and you could even get an infill for the sink to create more usable space here.

And while bench space might be limited, storage is certainly not – there are four decent-sized drawers, two narrow shelved cupboards and a wire-basket pantry below the bench, with lockers overhead alongside a Sphere microwave and a cupboard containing the Topray Solar monitor for the 150W panel and fuses.

Most of the cupboards have easy-to-use, self-locking catches, although I found the drawer latches a little more fiddly with a mechanism that needs to be pushed in before pulling the drawer open.

Across from the kitchen and immediately behind the front cab is the 186L Dometic fridge-freezer. Above the fridge is the Fusion stereo and a Drifter by Setec battery monitor. A locker at ground level houses the electrical switches and the battery and generator controls.

The plush leather cafe-style dinette will comfortably seat four people for a meal around the single pole-mounted table. The rear dinette seat has a high back and doubles as seating for two additional passengers on the road. It’s a nice space for relaxing and there is, of course, more storage here – three overhead lockers and a drawer under each seat. Behind the rear seat is a neat shelf with three smallish cavities, perfect for books or smaller items.

The main east-west bed sits flush against the rear wall of the slide-out, so only the forward side has a robe and bedside table. While it does mean the person sleeping towards the rear misses out on having somewhere to stash any items they want close by, it certainly doesn’t mean the bedroom area is lacking in cupboard space!

Included in the bedside robe is a cavity next to the bed for smaller items, as well as two overhead lockers. At the foot of the bed, the low wall of cupboards are flanked either side by full-height cabinets. Because of the slide-out mechanism, the full under-bed space isn’t available for storage, but there are a couple of cavities where you could stash a few bits and pieces. All in all, you really shouldn’t have any issues finding a home for all your necessities.

In the cabinetry at the foot of the bed is an extending arm for the Sphere TV, perfect for viewing movies from bed. Another TV arm sits immediately to the left of the entry door, which can be seen from the dinette, although anyone sitting in the front seat would have to do some serious twisting to view it clearly.

The full-width rear bathroom features a decent-sized, full-height shower with a clear screen and a mixer tap with flexible height hose on the nearside. The rear wall vanity has a ceramic bowl sink and a large mirror, which definitely adds to the feeling of space. Again, there are plenty of storage options here, including cupboards, drawers and a shelf.

A 3kg Sphere top-loading washing machine is tucked under the vanity bench on the offside corner next to the Thetford cassette toilet. There’s a window behind the toilet and a vent above the shower to combat any moisture build up. A sliding door with a towel rail closes off this area.

There’s plenty of lighting in the bathroom and, indeed, throughout the rest of the Optimum, courtesy of a combination of LED downlights and strip lighting. While there were no reading lights fitted, we were told they are an available and customisable option.

Our review model was fitted out in fairly neutral tones, with two-tone leather on the dinette, wood-finish panelling throughout and a lighter finish on the kitchen cabinetry. Personally, I found the wooden finish a little dark and not necessarily to my taste, but Jayco offers plenty of options on the decor and you can certainly customise the interior to your preference.

It is this level of customisation that is one of the advantages of the Jayco brand – the extensive options allow you to customise the lighting, decor, features and fittings to your liking. In addition, of course, its extensive dealer and service network is a comforting thought for potential buyers.

Overall, the Optimum’s layout is spacious and practical and, while it might not be designed for the racetrack, it would make a very comfortable home-away-from-home. It certainly hits its mark as an impressive and fully kitted-out, luxury motorhome, albeit with a price tag to match. But long-term tourers would have no qualms packing all the required gear for life on the road, with storage galore and a load capacity to match, and they could do so knowing they will be travelling in true comfort and style.