Since its introduction in 2011, when it won Caravan World’s Legends Series Luxury Caravan category, the Pride Platinum has been Nova’s flagship and innovation leader. Back then, its wow-factor was its Al-Ko slide-out bedroom that moved the caravan’s bed 600mm out of the offside, while a big-screen TV rose out of a cabinet on the opposing wall at the touch of a button.

However, such is the pace of change in the industry that, with few exceptions, most major manufacturers today offer slide-out wall options across their touring model ranges. So Nova has moved the 2016 Pride Platinum up several pegs again.

This time, the top Nova is available with a choice of sliding wall options. Our 21-17F review model has a huge, 4m-long offside slide-out that moves both the transverse caravan-queen-size bed and adjacent cafe-style dinette out together and increases interior space dramatically. 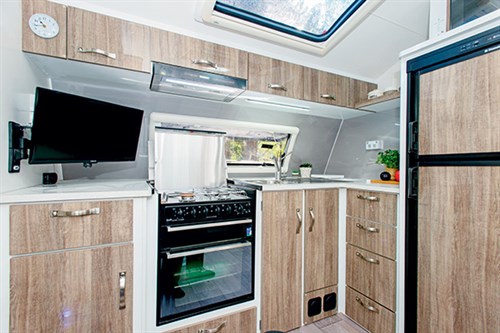 It isn’t the largest model in Nova’s 2016 range – that honour goes to the 9.7m hitch-to-tail Platinum 236-48C, which features a huge, slide-out U-shaped lounge – but our review Pride is the largest slide-out model that Nova has built so far.

It also broke new ground by being the first Nova caravan to be fitted with Al-Ko’s new Enduro Cross Country independent trailing arm coil spring suspension – a feature that is now standard on all Pride Platinums because of the extra ground clearance and smoother ride it brings at a time when Australians are travelling longer and further afield.

The van’s higher-than-usual hemline allows you to get a good look at its underpinnings, including the new Al-Ko suspension, which is robust by touring caravan standards, suggesting that this is the sort of RV that couples might choose for a long touring trip.

And the rest of the Pride Platinum certainly looks ready to handle whatever touring conditions are thrown at it. Ground clearance is excellent, although, with a van of this size, you need to be mindful of its long rear overhang and angle its approach to steep driveways.

The new Al-Ko Enduro suspension can take some more of the credit here because, without beam axles linking its four 15in wheels shod with 235/75 section tyres, there is good belly-space. Also impressive for a touring caravan is how well the two 95L water tanks and their plumbing are shielded from stray stones. This experienced thinking also extends to the A-frame, where the external water tap is similarly protected.

The 21-17F under review has a new layout based on customer requests for more seating space for entertaining. This was the first of its type built with this layout and, I have to say, my feelings were a little mixed.

The front kitchen immediately to the left of the entrance generally works well, with good bench space thanks to its L-shaped design butting up to the big Dometic three-way 223L AES fridge. However, owners will need to be selective about when they access the top drawer and pantry on the nearside of the kitchen, as they block the entry door when open.

The other kitchen issue is height-related. The Pride Platinum has a distinct, sloping front roof for aerodynamic reasons, which results in restricted headroom at the front, and tall travellers might well be advised to select another layout from the other six on offer for this model.

Given all the available space, it was slightly disappointing to find the full-width rear bathroom, with its separate shower and toilet, to be relatively tight on hip and shoulder room, although it does have all the necessities.

Even at $115,000, as reviewed, the latest Nova Pride Platinum is a lot of caravan for the money.

The layout with large slide-out will not suit everyone and those for whom it doesn’t should check out the other six standard alternatives – five of which have front bedrooms with sliding lounges only and larger bathrooms.

However, whichever layout you choose, several things remain the same with the latest Pride Platinum; thanks, in part, to its new Al-Ko Enduro suspension, you get a stylish, well-built and well-equipped luxury touring caravan capable of taking the rough with the smooth.

The full test appears in Caravan World #553 September 2016. Subscribe today for the latest caravan reviews and news every month!