Is it a boat, a caravan - or both? The intriguing CaraBoat 7500 hybrid is the brainchild of Port Stephens boatbuilders Andrew Kiernan and Rob Shenn.

They turned their attentions from catamarans to caravans when they came up with the innovative and transportable Caraboat houseboat.

Sure to draw attention on the road, in the van park and on the water due to its crossover capabilities, the CaraBoat is a striking and surprisingly practical hybrid floating vehicle. 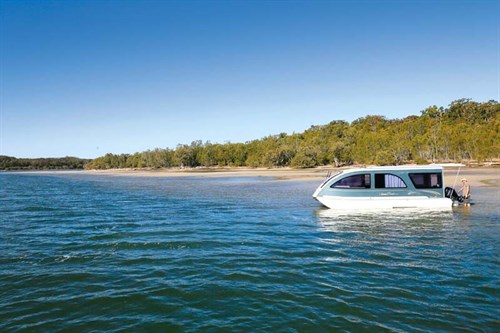 Caravan World's sister magazine Trade-A-Boat took the CaraBoat to the water and the bitumen and reviewer John Ford was said he and everyone he met with the CaraBoat was "gobsmacked" by it.

The CaraBoat is about the same size as a standard on-road  caravan, with a similar aerodynamic profile, but the outboard motors hanging off the back give clues to its water-going intentions, as does the cataraman-shaped hull.

On the water, it has the flat, stable shape of a punt with gull wings on each side.

FROM CARAVAN TO BOAT

Launching the CaraBoat from its trailer into the water is quite easy. Use the gas struts to lift the aft awning and remove the moulded mudguards from either side. The hull then slides smoothly from its custom trailer.

Once on board the CaraBoat 7500, you'll realise it's more Cara than Boat inside. There is a small external platform between the engines but, apart from that, the boat is a wholly enclosed space.

There’s no real cockpit and no outdoors living area, though later models may have the option of a detachable large rear deck that will live under the CaraBoat, in a bracket on the trailer.

Large windows along the sides plus large openings at each end give a very open, breezy feel and fantastic views and natural light.

The lounge converts to a double bed that can be set against the wall or slid on tracks into the middle of the saloon.

There's a 120L Vitrifrigo fridge freezer under the bench and a Smev three-burner cooktop with an oven/grill below plus plenty of storage.

In the rear of the saloon is the main entertaining space where a convertible lounge faces a port-side settee, offering seating for six. The lounge has a removable table and can convert to a second double bed.

The CaraBoat comes with two four-stroke Tohatsu 30hp outboard motors, and handling was predictable if not overly sporty. Stability indicated the boat performs best at a sedate speed.

With 200L fresh water, you can stay out on the water for longer, and with solar power feeding a 150Ah deep-cycle battery and the outboards adding 30Ah charging, you’ll be able to party while you’re out there.

In caravan mode there’s an optional 3.7m Fiamma F65 annexe that deploys along the passenger side. Entry from the ground is through the rear door via a set of stairs.

The CaraBoat comes on a tandem-axle galvanised trailer with leaf springs and disc brakes.

The CaraBoat is priced at around  $139,000 depending on options - but you are basically getting a two-for-one deal!

For more information head to www.caraboat.com.au