Jurgens is best known for its distinctive caravans and pop-tops which have a European and South African look and a lighter weight than many of their similarly-sized counterparts.

Those themes continue with one of the latest vans out of the Jurgens stable, the Travado TR2505, which is built for good handling on country dirt roads (rough road, not offroad).  Given the way the van is built, and its good ground clearance, it may look to some like a full offroader but Jurgens makes it very clear that the van is not built with offroad use in mind.

The tandem-axle’s suspension system is Vehicle Components Cruisemaster Country Road Suspension (CRS), which is designed for exactly that purpose. 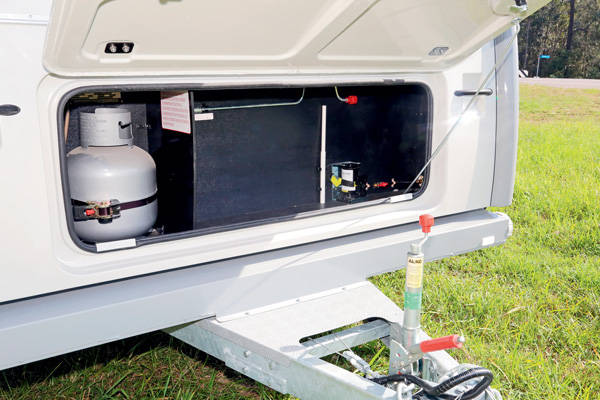 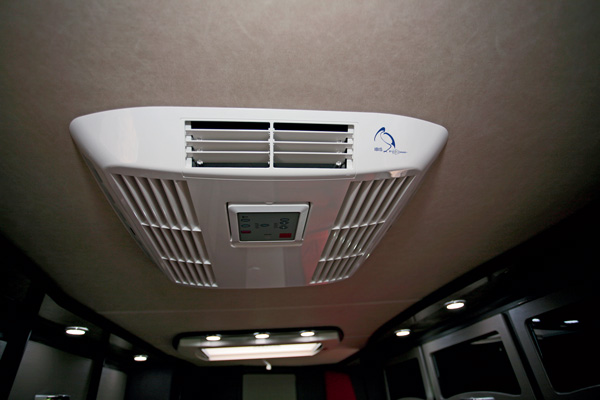 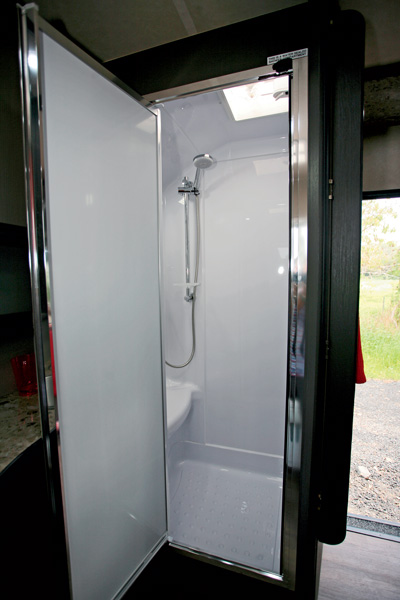 Jurgens says the hot-dipped galvanised chassis was designed using Finite Element Analysis which means computer modelling is used to identify stress points which can then be strengthened accordingly. This is why the chassis, except for the drawbar, looks a bit different to the more common rectangular hollow section (RHS) box-section style and has more C-section punched hole components. All the chassis components are computerised numerical control (CNC)-fabricated and much of the chassis is bolted together rather than welded. The two 80L water tanks are fitted above the tandem axles and the 60L grey water tank, still a rarity on new caravans, is fitted behind the second fresh water tank.

Like the chassis, the body work is different to the usual frame and cladding style that we so often see in Australia. It is a frameless composite style with an aluminium, timber, polystyrene, plywood, PVC sheet that is all vacuum bonded together. Fibreglass mouldings are used around the roof and wall corners and there’s a conventional front boot which is large enough to hold the 9kg gas cylinders and still offer plenty of storage space. There’s an external barbecue fitted to the front nearside corner of the van and the spare wheel is bolted underneath the chassis at the front.

The island bed has a chamfered shape and the mattress comes with a bolster which extends its length to 1.88m (6ft 2in). A bolster sometimes affects walk-around space at the end of the bed, but that’s not the case here, due, in part, to the chamfered bed which varies in width from 1.53m (5ft) at the head to 1.3m (4ft 4in) at the foot.

The bedroom cabinetry is quite varied. In addition to the normal bedhead of overhead lockers, side wardrobes and bedside cabinets (with open shelves), there is a generous shelf under the window at the back of the bed and storage cupboards in both corners at the foot of the bed. The nearside is a conventional diagonal style but the offside one sits flat against the end of the kitchen bench and has upper and lower cupboards with space for a flatscreen TV in the middle. The radio/CD player is also located here.

While the bathroom, with its nearside shower cubicle and offside cassette toilet, might sound a bit conventional, there are some subtle differences which make it unique. The vanity and wash basin are slightly offset to the offside, leaving enough room for the top-loading washing machine as well as a useful shelf under the bench for towels and the like. There is also a cupboard under the bench, and two shaving cabinets above, with a mirror in between. There is a bank of three narrow cupboards that run up the wall on the front side of the toilet, and the simple but effective front-hinged hatch cover above the washing machine provides an effective resting place for the laundry basket.

Jurgens has gone to the trouble of making sure its vans’ fitness for purpose – rough road not offroad travel, in the case of the Travado – is well understood by buyers. This means the company has not had to create excessively heavy vans and, as a result, the Travado is a van that suits its purpose and tows very well.