Given their length, many modern offroad caravans tend to have tandem axles. But there are some good reasons why single-axle caravans might be a better option for keen offroad travellers, and this is why Kokoda produces the Major X-Treme – a 5.23m (17ft 2in) single-axle caravan – in among its range of tandem-axle vans.

The Major X-Treme has a distinctive departure angle at the rear and, in a van of this length, it is this angle that dictates the interior layout. The Major X-Treme has a rear island bed, an L-shaped dinette along the nearside, a front offside corner bathroom and a kitchen that fits across the remainder of the front.

Having an L-shaped lounge in a van like this works well. There’s no seat back to block access from the doorway and it will suit two people without too much trouble, although you have to fit your legs around the table’s single pole-mount. The square table can be moved out of the way when not required. At the rear end of the seat is a drawer, which offers more convenient storage access than an open space. There are, of course, lockers above as well as an AM/FM radio/CD player. 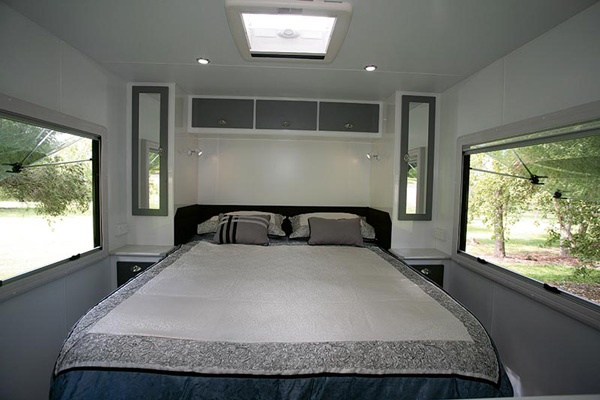 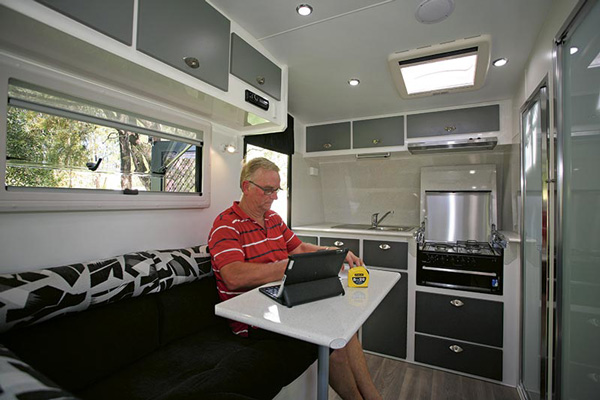 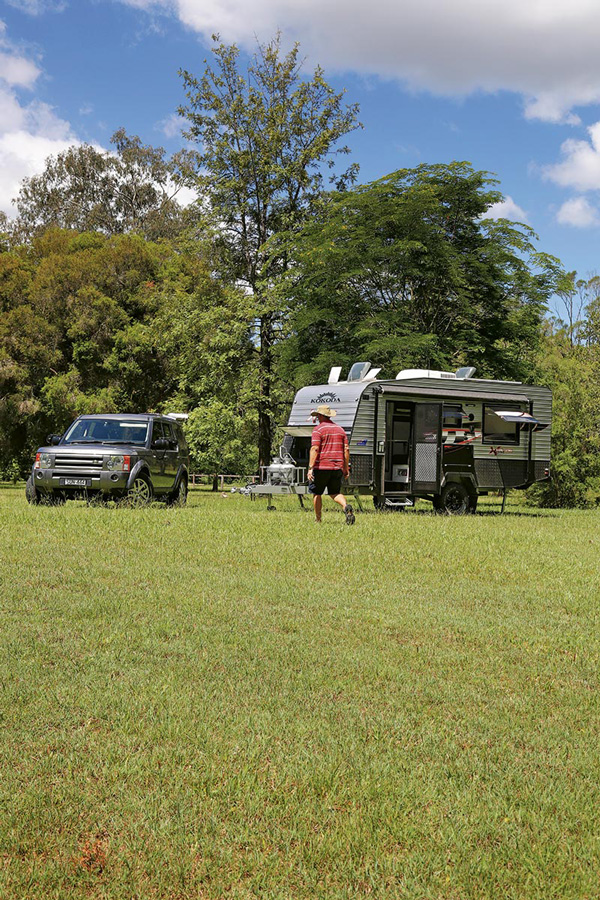 Large windows are fitted either side of the bed in the rear. The bed measures 1.88x1.52m (6ft 2in x 5ft) and has a metal-framed, posture-slat bed base, which can be lifted to give access to the sloped floor storage underneath. Handily, a drawer has been fitted here for smaller items.

Bedside cabinets and overhead lockers make up the remaining bedroom storage facilities. On the offside, the fridge cabinet wall is used as a mounting point for the flatscreen TV, along with the accompanying 240V and 12V sockets. The TV can easily be seen from the bed and from the dinette by swinging it out, but the viewing angle is awkward for at least one person.

The only external storage is the front boot, which isn’t particularly large but is good for hoses, power leads and the other camping essentials. The spare wheel is mounted on the rear bumper bar. Two large grab handles are fitted to the front of the van, although I’m not sure just how much pushing and shoving can be done with a van that weighs nearly 2000kg!

Although a little small, the front kitchen bench is long enough for a four-burner cooktop and grill plus a stainless steel sink with drainer. Benchtop working space isn’t great but the cooktop does have a flush lid. Fitted under the bench are a cutlery drawer, a pots and pans drawer, a two-door cupboard and a wire basket slide-out pantry. The latter is close to the entry door, making it easily accessible from outside. Three overhead lockers complete the kitchen storage, although their actual capacity is less than usual because of the ceiling curvature.

The bathroom is, undoubtedly, the standout feature of this van, with separate but adjoining cubicles for the shower and toilet/washbasin. The forward one houses the toilet and has a sloping roof, echoing the van’s curved front. It’s an interesting variation on a split bathroom with the benefit of more bathroom space, although it does have a larger footprint and takes up more space in the van. But if you like your bathroom space, it’s a winner.

I noted in my opening comments that a single-axle caravan might be a better option for some offroad travellers and, having had a play with the Major X-Treme along some narrow bush tracks and also traversing dirt roads, I reckon that if you’re happy with slightly less interior space, then the single-axle van, with its shorter length, definitely has some advantages in the manoeuvrability and weight departments.

Having said all that, the interior layout is still very comfortable and the bathroom arrangement is larger than in some tandem-axle caravans that I have seen.

Generally speaking, the Major X-Treme is a well-appointed offroad caravan.