As its name suggests, Jawa Offroad Camper Trailers supplies a range of offroad campers, but it has, more recently, moved into the caravan market with its rising roof Mirage JC14 hybrid. The Mirage is called a ‘semi-offroad’ model – capable of hitting the dirt, but not suitable for deeper river crossings due to the gas vents in the door.

Many rising roof models need a hand winch to lift the roof but the Mirage’s setup is a little more sophisticated – once the roof clips are undone, it’s simply a matter of pushing the button on the handheld control and the roof rises automatically.

Once the roof is raised, both ends can be pulled out and the floor struts, which attach to the drawbar and rear bumper bar respectively, put in position. With that done, the internal struts can be located to stretch the tent areas out. And except for rolling out the Dometic awning, that’s the basic set up done. 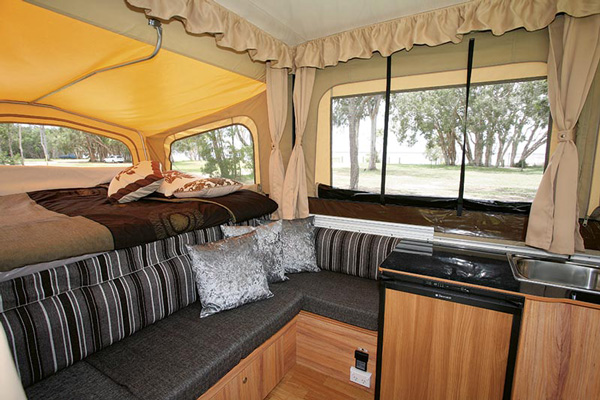 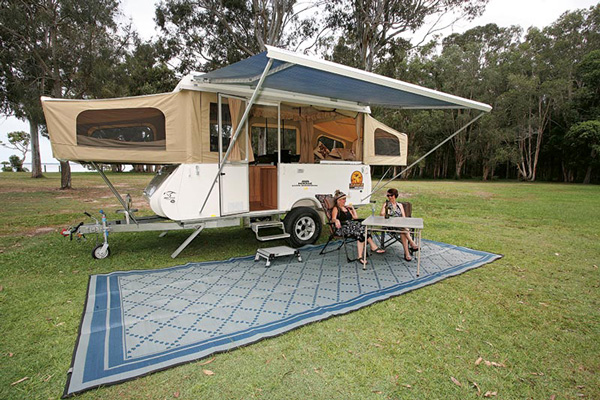 Although the van’s body might be small, the large tent and fold-out ends create a huge amount of internal space. Large screen windows help no end and there’s the bonus of being able to remove the nearside wall entirely – bringing the outside in. By day, light obviously won’t be an issue but with just two ceiling lights fitted inside, the camper will not be so well-lit at night. I suspect it may not be enough for anyone who likes things brightly lit, so a couple of lightweight LED strip lights would not go astray in the living and bedroom areas.

This layout incorporates beds at either end of the van – caravan queen-size at the front and a double bed at the rear – a four-person dinette on the nearside, a club lounge across the front and the kitchen on the offside. All the ply timber cabinetry work has a wood veneer finish and the general decor is quite nice, with the ruffled curtains that run around the roofline giving it a slightly homely touch.

The under-lounge areas provide general storage space, although part of this is taken by the 100Ah house battery and the second battery that powers the electronic roof. At the base of the seat, adjacent to the fridge, are the water tank level gauge, battery monitor and a powerpoint, which are a bit awkward to get at.

Although the kitchen bench is a bit low for taller people (dictated, of course, by the low wall height), it’s quite generously-sized with a four-burner cooktop and grill, stainless steel sink with drainer and the under-bench 95L fridge. This still allows for plenty of benchtop space and storage that incorporates cupboards, drawers and an open compartment.

For added convenience, a portable ensuite bathroom with porta-potty and hot water system, as well as a 180W solar panel are available as options and were, at the time of writing, included as a free bonus.

I mentioned previously that the Mirage JC14 has a very generous load capacity but, given the storage limitations of the van, you’d be pushing to have that much gear onboard. This isn’t necessarily a bad thing, though – travelling light has many benefits.

Still, there’s plenty of room for a young family of four to enjoy holidays without the expensive outlay of a full-sized family caravan. And once set up, the Mirage offers plenty of living space – even more so if the under-awning area doesn’t have a screen.

This mirage is certainly no illusion – it’s a very real and practical rising roof caravan!