Paul Nedanis couldn’t resist the ‘temptation’ to establish Eden Caravans in 2010. Ironically, it was his wife, Mary, who came up with the business name, drawing inspiration from the biblical Garden of Eden.

Mary recalled that the chronicle of Adam and Eve is central to the belief that “God created human beings to live in a paradise on earth”, and noticed a synergy that she felt Paul should adopt in creating a lifestyle for his clientele. So Mary gently nudged Paul in the ‘ribs’ and Eden Caravans became figuratively fashioned from ‘dust’.

Well, not entirely true as Nedanis had long held a desire to manufacture his own caravans. In fact, his real-life genesis in the RV industry started more than 30 years ago. And once again the catalyst was Mary, who introduced Paul to caravanning after meeting as teenagers. 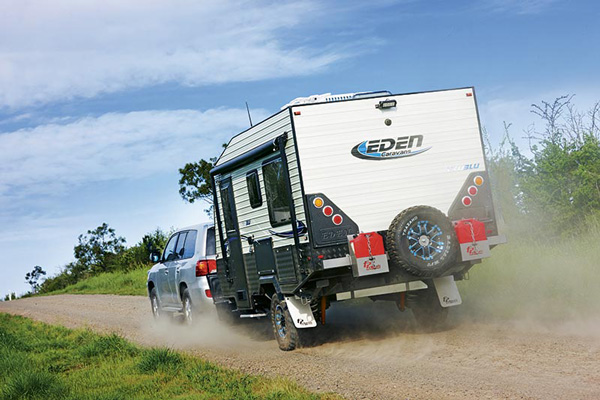 “I love building and talking about caravans,” said the down-to-earth Nedanis. “I’m self-taught, but I’ve spent countless hours analysing other makes and models… In the formative days there was a lot of trial and error, and even now I’m continually modifying aspects of our caravans.”

Nedanis has made some quantum leaps in a short period, to a point where he produces several models, including the Tru Blu 4.42m (14ft 6in) offroad, from his Campbellfield, Vic, factory.

The Tru Blu packs a visual punch on the outside, with dapper aluminium cladding and neat checkerplate finish. A large, lockable checkerplate toolbox and stoneguard were options fitted to the 6in A-frame, which also houses dual 9kg gas cylinders and an Anderson plug, while other options included on the test van were a reversing camera, pull-out Weber Mini Q and two high-powered spotlights (front and rear).

Aptly, there is a touch of paradise inside the Tru Blu – from the lightweight ply cabinetry and 16mm Euro-style flat panel, gloss white doors with push-button shell lock handles, to the high-density cushion lounge and charcoal upholstery. I also liked the Aussie Traveller double-glazed windows, and the protector on the front window.

And there isn’t any feeling of claustrophobia given the sensible positioning of the front lounge and table, rear bedroom, and mid-area kitchen and shower/toilet combo. It may be an optical illusion, but the large bedroom mirror, overlooking a 6ft 2in x 4ft 6in double bed with innerspring mattress, reflects an added sense of space.

There is also a window, with block-out blind and flyscreen, above the kitchen sink.

I thought the convection microwave was a real winner, allowing food to be cooked quickly and still come out browned or crisped, courtesy of a high velocity forced air fan to circulate the hot air uniformly.

Also inside are a 23L Suburban hot water system (240V gas with 12V ignition), 19in LCD TV plus DVD/CD player, and a magazine rack. And there is a stainless steel grab handle on the immediate right as you step inside the van.

All up, the Tru Blu is meticulously designed, and it is obvious that great pride has been taken in the workmanship. Nedanis said that he found people were quite often opting for smaller vans, and this tough, 14ft 6in offroader is structurally sound, reliable and comfortable, offering a complete away-from-home, luxury lifestyle for someone looking for something on the smaller side.

The full-of-life Tru Blu is a real temptress – those looking for a small but surprisingly roomy caravan may well find what they’re looking for in this energetic offroader.

And given its raft of standard inclusions and purpose-added options fitted, the $64,950 asking price should entice buyers longing for a plush, pint-sized van. It really is perfect for a couple with a hectic lifestyle who are craving a quick escape from the rat-race.