One of the characteristics that separates British and European caravans from their Australian counterparts is body construction. Caravans built in this country gain much of their strength from the chassis, rather than the body, which results from a lot of steel being used underneath the van. Caravans out of Europe tend to be built with more strength in the bodywork, resulting in a lighter chassis. This is definitely the case with the Elddis range of caravans imported into Australia, which includes the Avenger Storm, supplied by Sydney RV Group for our review.

Independent rubber torsion suspension with shock absorbers is used on all four wheels, and it’s in this area that you’ll discover a strange feature of this van. The Avenger Storm rides on 175/65R14 Vredestein Snowtrac 3 tyres. I’m sure they are good tyres but they are designed for exactly what they sound and look like – driving in snow and slippery conditions. The spare wheel is mounted on a bracket behind the rear wheels and fits between the nearside chassis rail and the adjoining water tank.

I towed the Avenger Storm with a Nissan Navara ute and, given its ATM of 2090kg and Tare of 1774kg, it’s not surprising that it’s a very easy tow. A little trip into the Blue Mountains, west of Sydney, NSW, not only gave me freeway driving time but also a few rough bush tracks to tackle and it handled very well, with few ground clearance problems. 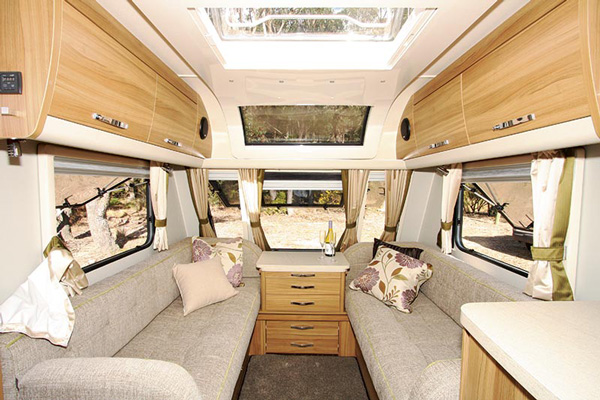 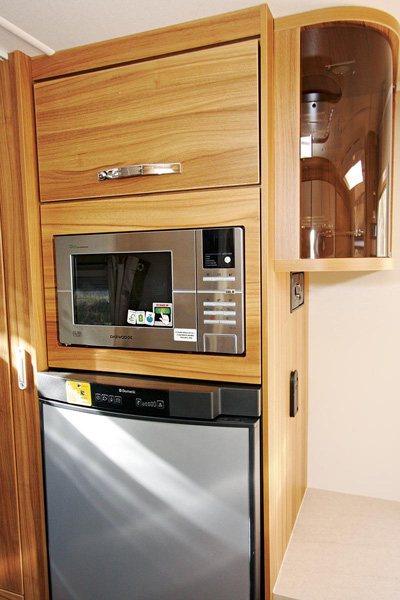 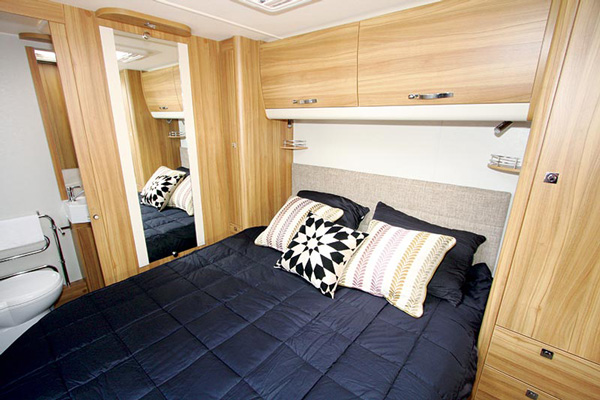 Inside, the Avenger Storm has a different layout to many Australian vans. Forward of the entry door are sideways facing lounge seats, with the kitchen in the middle of the van, leaving the rear for an east-west double bed and a full-width bathroom. By the entry door are a number of master light switches, along with the Alde water/space heater controls and the digital battery and water tank level monitors.

Not surprisingly, the interior has a distinctive British look about it and, given the lack of windows along the nearside and the dominant faux-timber look, it could be too dark, but for the two large marine-style hatches which let in plenty of light.

Measuring 1.9x1.53m (6ft 3in x 5ft), the island bed butts up neatly against the nearside wall and comes with the usual bedside wardrobes and overhead cupboards as well as reading lights, and very small shelves under the overhead lockers which, I felt, would have been more useful if they were a little bigger. Lifting the bed gives access to the under-bed storage area, which is also accessible from an external bin.

A small cabinet is fitted at the foot of the bed with a swivel arm for a flatscreen TV above, as well as the necessary electrical connections. The front lounges fold down to make a second bed, so a concertina-style curtain is fitted to close off the bedroom/bathroom from the rest of the van if you want a bit of privacy.

Travelling cooks should not have too much trouble with the Storm’s kitchen (I had to restrain myself from dropping the cliche about ‘cooking up a storm’ here!) The Storm has the full kit, with a four-burner cooktop, grill and separate oven. Adjoining that, the moulded sink comes with a detachable drainer which leaves a reasonable amount of benchtop area free for your meal preparation.

There are plenty of drawers, cupboards and overhead lockers, some with plate and cup racks. One particularly narrow cupboard holds the freestanding table for the dinette up front. All the British power point fittings have been swapped for Australian plugs.

Across the rear, the bathroom is a bit narrower than those seen in many Australian vans but it does come with a shower cubicle, Thetford cassette toilet and a small vanity cabinet with wash basin, cupboard and large wall mirror. An adjoining shelf or two would be useful here, as there isn’t anywhere to put toiletries. But one item of interest, not seen in Australian vans, is the water-heated towel rail. Above the toilet is a good-sized window that supplies plenty of fresh air when open.

The Elddis Avenger Storm offers an interesting alternative to a typical Australian caravan design; not only in its construction and relatively light weight, but also in the layout which offers a variant on a design with a full-width rear bathroom.

Yes, there are some features which really show the van’s British heritage but, for some buyers, that is actually an attraction and the importers have clearly gone to some lengths with the chassis to make sure it’s suited for Australian conditions.

This van is particularly well-suited to a buyer who wants a reasonably comfortable interior layout but who doesn’t own an overly large tow vehicle.