The new Bushmaster Bluegum Offroad looked right at home on Terry Ryan’s jaw-dropping 59-acre property at Strath Creek, about 100km north of Melbourne, Vic. With the King Parrot Creek and the ‘Valley of a Thousand Hills’ providing a magnificent backdrop, it towed like a dream behind the Mercedes-Benz GL320 CDI AMG 4Matic tow vehicle on the picturesque, undulating roads of the Murrindindi Shire.

Metaphorically speaking, Terry is an archetype of the caravans he builds. A musician and farmer in his spare time, Terry is at peace with the world when at his bush abode and his history in the RV industry has been well-documented. He cut his teeth manufacturing camper trailers in Queensland and then branched into caravan production in 1993 before relocating to Melbourne in 2007.

The Bluegum’s interior is decked out like a five-star hotel, and I particularly liked the ensuite, with its ruby red upper cabinetry that stands out as you walk in. The ensuite’s china bowl vanity comes complete with a mirror, flick mixer tower tap and plenty of drawers underneath including a 1m-high ‘cubby hole’ with two storage compartments that are ideal for storing towels and doonas. There are also three overhead lockers with LED strip lighting above the vanity. And the Dometic 4kg front-loading washing machine is certainly a bonus when it comes to spending extended periods on the road. 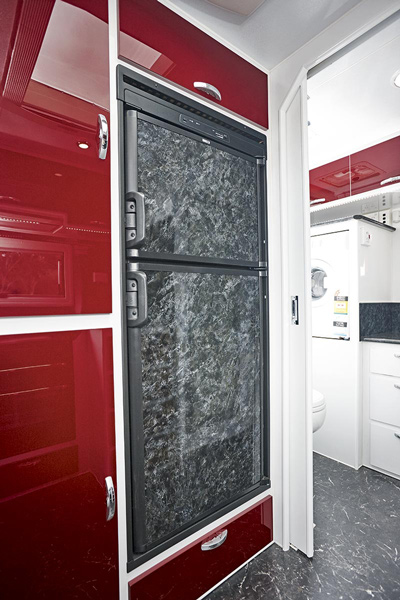 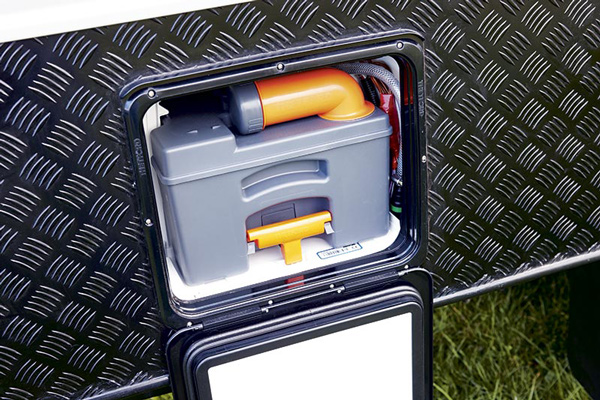 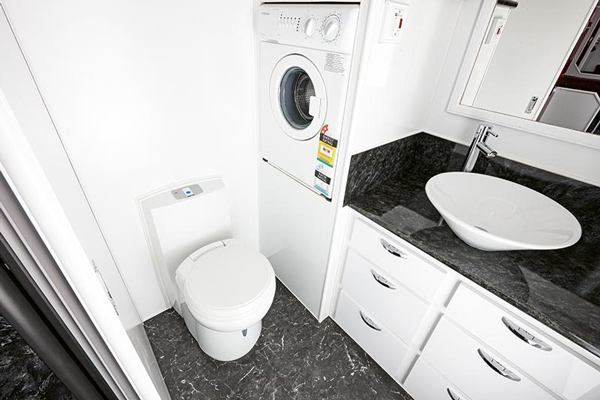 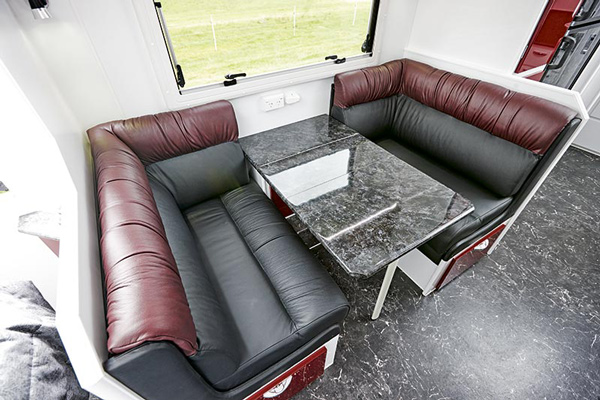 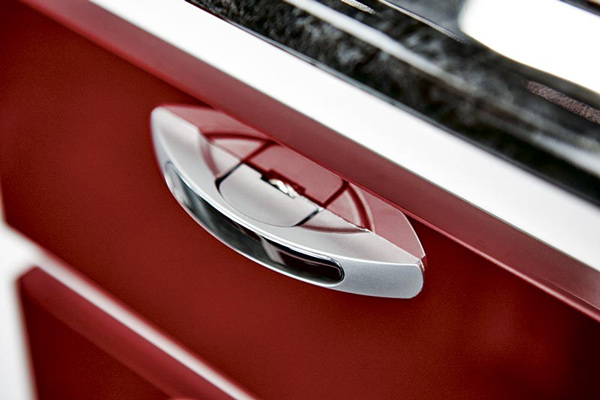 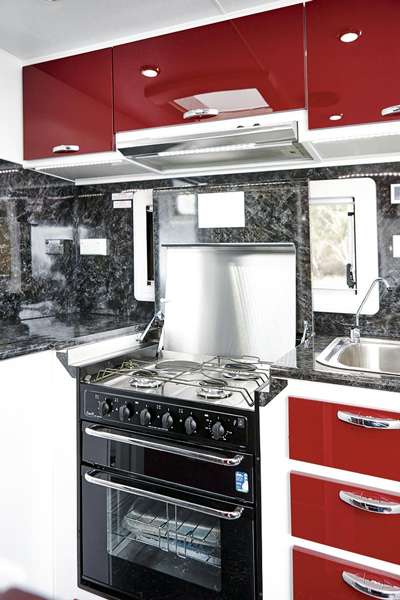 The fully-moulded shower comes with a flexible hose and mixer, and a hatch with a 12V fan. There is also a Thetford ceramic cassette toilet with a window and hatch above. And power is at your fingertips, courtesy of two 240V outlets and one 12V outlet.

You’ll be comfortable in the front island, queen-size bed, which has a wind-up overhead hatch complete with screen and blind. Storage certainly is not an issue here, either, with three overhead lockers, two wardrobes, four cupboards and a 700mm-long drawer for good measure. The Truma gas heater is located under the bed with a convenient control at one side. A nice touch is the magazine pockets on either side of the bed, so you can easily tuck away your reading material at lights out, with another pocket near the entry door. The 22in Teac TV/DVD combo is positioned on a bracing wall at the foot of the bed and can swivel to be viewed from the bedroom or kitchen/dining areas.

The practical kitchen, with roll-topped benches, has oodles of storage in the drawers and cupboards below the double-bowl stainless steel sink, and additional drawer space in the L-shaped bench end and in lockers above the locally-manufactured recessed stove, rangehood and oven. The glossy cabinetry is the eye-catching ruby colour (16mm plywood covered with laminate) seen throughout with modern, easy-open handles. Opposite the kitchen bench is the enormous Waeco 226L fridge/freezer and a large pull-out pantry, containing five storage compartments and a water pump at the base.

The cafe-style dinette is sleek and stylish, and I couldn’t help but be impressed with the comfortable, genuine leather two-tone vino and black lounge complete with tri-fold table and two storage drawers. This area also plays host to a pair of Pioneer speakers and an Aircommand Ibis reverse-cycle air-conditioner.

Terry says his loyal clientele like to take his caravans to such faraway places as the Oodnadatta and Birdsville tracks, and also some of the smaller range up to Cape York, which he says is testament to the strength of these vans. And with a five-year warranty, with no restrictions on where the caravan is taken, the Bluegum is virtually a go-anywhere offroader. It’s built to take some punishment, and is loaded up with water and power so the wild blue yonder can be explored to your heart’s content.

Priced at $79,855, it is in the upper echelons of the market, but there are a host of standard inclusions here so, if you have the budget and you’re after something to hit the tracks with, this Bushmaster shouldn’t ruffle your hip pocket nerve.

Best of all, I can envisage a growing band of caravanners at ‘home among the gum trees’… with an awning out the front, and an old camping chair.