Standing out from the herd is a challenge for manufacturers building caravans in Australia, particularly for those based in outer Melbourne, where much of the Australian caravan industry is based and a number of common suppliers are used. Sometimes the differences are not immediately obvious, but rather in things that cannot be seen on first glance. These were some of the thoughts that crossed my mind as I looked over an Amaroo 1906 caravan from Wonderland RV.

Having 6m (19ft 8in) of caravan gives a designer a fair bit of room to play with, but Amaroo has opted for safety with a familiar front bedroom, full-width rear bathroom layout. It’s done in a nice, bright and airy style with glossy surfaces that bounce the plentiful light around – both natural light and from the multiple LEDs spread throughout. From the entry door forward, the living and bedroom areas are fairly open, but a shallow partition is built in to create a bit of separation for the bedroom.

At the front of the van, the island bed sits on a posture slat bed base and measures 1.85x1.52m (6ft 1in x 5ft). Underneath, the storage area is compartmented and includes a good-sized drawer. Around the bedhead are the usual overhead lockers and side wardrobes. Windows on both sides and a large ceiling hatch offer plenty of fresh air flow. 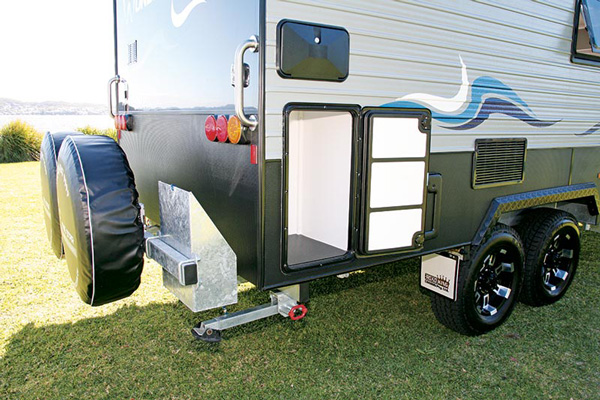 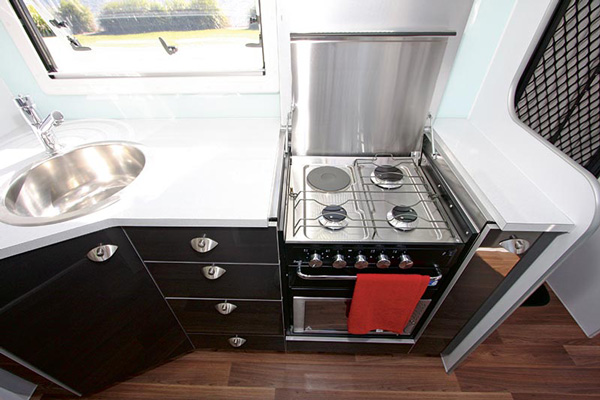 Above the dinette, the overhead lockers offer the usual storage space, with a couple of shelves available. However, the end one above the radio/CD player houses the battery charger control, solar panel regulator, 12V fuses and hot water switch. Across the way, the flatscreen TV is mounted on the partition by the entry door and can be swivelled for viewing from the dinette or the bed.

Outside the bathroom, the Waeco 175L 12V compressor fridge fits along the offside wall next to the cafe-style dinette, with the rest of the kitchen bench on the opposite side. There’s a good and varied storage area, consisting of three drawers, a cupboard and two wire basket slide-out pantries, built into the bench, along with a couple of overhead lockers with shelves,

The kitchen bench is angled at one end which is an effective way to create a bit more bench space. In this case, the round sink (without a drainer) is set in the angled corner. Alongside that, the four-burner cooktop, grill and microwave combo also has a flush cover that doubles as additional benchtop space.

Opposite the kitchen, the leather upholstered dinette is spacious, although the wheel arch does protrude into the footwell. It comes with an adjustable-height table between the seats and hinged footrests at the seat ends. Kicking back against the wall cushions with your feet up is reasonably comfortable for watching TV but the one-piece table will be fiddly to move. Above the table are a 240V powerpoint and a protruding 12V socket but, given the plethora of 5V USB charged items around these days, a flush 12V/5V combo might be a better choice.

The rear bathroom is quite deep, which results in a spacious shower cubicle in the nearside corner, complete with flexible hose shower and a fan hatch in the ceiling. On the opposite side, the cassette toilet sits in the space between a large shelved cupboard and the wall, and just about passes my patented ‘elbow room’ test. Ventilation is quite good, with both the fan hatch and a large window (by bathroom standards) above the loo. The mid-rear wall is taken up by a vanity cabinet that is large enough to have a cupboard, top-loading washing machine and wash basin. Some nice additions include overhead lockers, a fancy flick mixer tap, a large wall mirror and a towel ring.

On first glance, the Amaroo 1906 looks pretty similar to many other vans, especially with its familiar interior layout. However, it’s the small things that make a difference, such as the way the van is built and the cabinetry put together – it’s a bit different to the usual method. The interior is finished in an attractive style and there are some good features included, such as a reversing camera and good reversing light, which all work together to make this van a good rough-road or offroad travelling proposition.