Nova prides itself on building luxury caravans and, yet, with the Revivor 16-6 it has made a fully-featured caravan an attainable goal for buyers on a budget. Certainly, the Revivor 16-6 is not a large van, but within its 5.5m (18ft) body it packs in a lot of luxury and convenience for the $54,990 asking price.

The Revivor towed well behind our Isuzu D-Max tow vehicle. The ball load at Tare is a bit more than 10 per cent, and there was no undue swaying or pitching with the van on. The Revivor has extra peace-of-mind with its standard Al-Ko ESC system.

Stepping inside via the forward nearside Camec screened and curtained door, which is set lower than the body sills to allow easier access, you have just one internal step to floor level. You’re greeted by a bright interior decor, with the gloss white panels offset by the black overhead cupboard doors, black marble-look benchtops and black material used for the lounge. The hopper windows – both screened and meshed – and Four Seasons ceiling hatch allow in a good amount of natural light. 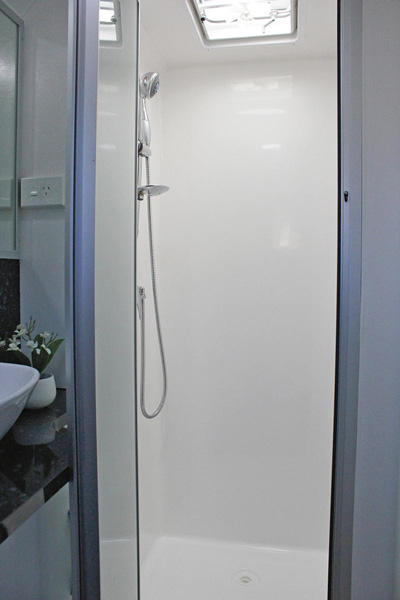 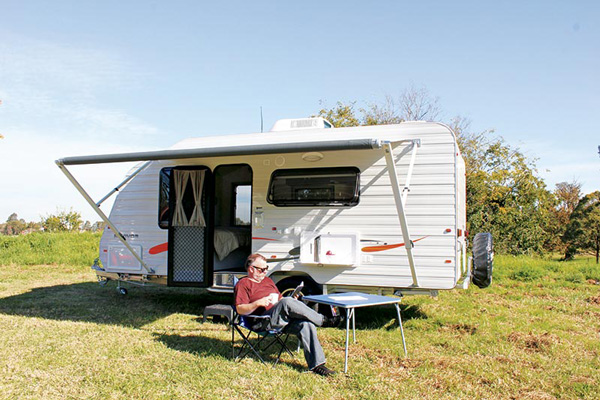 Forward of the entry door is the island bed and, to the rear, the kitchen and lounge followed by the bathroom. The walkway past the nearside cafe dinette and offside kitchen is relatively roomy and the whole fit-out is marked by an impression of high quality. There are no loose screws floating around, rough edges or sealant oozing from cabinet joins.

Storage is well-provisioned in this relatively small van. Starting in the bedroom, there are lockers above the bed, with narrow hanging space on each side and cupboards below, plus under-bed storage accessed via the strut-assisted, hinged steel bed base. The nearside dinette area and offside kitchen both have storage lockers above and, in the case of the kitchen, multiple drawers and cupboards below. The dinette has a small open recess under the table on the nearside wall and under-seat storage, although the battery and associated charging equipment occupies most of the aft under-seat space. The bathroom, too, features lockers above, with cupboards and open shelving below.

The bedroom is ample in size with sufficient access to the bed sides, although doing up your shoes while sitting on the side of the bed, for example, would be a little cramped. There is a small bedside table each side as well as LED reading lights and two double pole 240V powerpoints. There’s also a roll-out window at the bedhead, making adjusting ventilation while in bed a cinch (provided, of course, that you’ve previously opened the external aluminium protection blind). The only negative about the bed area, other than the cramped sides, is that the bedhead is recessed between the two wardrobes, making the small bedside tables a fair reach forward when you’re in bed. The TV is set high on a fold-out bracket on the offside wall at the end of the bed.

The cafe-style dinette seating is punctuated by a single-leg, tri-fold table. The seating is really only comfortable for two adults and, even then, the wheel arch intrusion on the nearside takes up valuable leg room. The large window, good table placement and LED lighting at the table all combine to make this a cosy, comfortable spot to take in the view, have a meal or enjoy a bit of reading.

The offside kitchen provides a fair amount of bench space when you fold down the cooker cover. While the large, domestic-size single-tub sink and drainer is a good thing, it does occupy that bit more bench space. To the front of the van, the bench is angled to create walk-around space at the bedside, which also reduces the available working space. Perhaps a hinged, fold-up benchtop could be added here to improve actual benchtop real estate? Folding it down for bed access would not be hard, and while access to the cupboard underneath would be a little restricted, I think it’d be worth it.

The bathroom is a generous space for a small van, with the fibreglass shower enclosure on the nearside and the cassette toilet on the offside, with the vanity unit in the middle. The shower has a glass door, an adjustable shower rose and a ventilation fan and hatch on the ceiling. A sliding door separates the bathroom from the living area.

The Revivor is well-provisioned for a short time off the grid. There’s the 160L onboard water capacity, a 105Ah AGM battery and 120W solar panel, and exclusively low-draw LED lighting.

This is a great van for couples who want ‘big van’ features without the big van price. It isn’t too heavy to tow, has all the appointments you’ll want and space and storage is well covered-off.

All in all, the Nova Revivor 16-6 has the right mix of build quality, features, space and towability.