Talk about coincidences. Not long ago, I was wondering about the ever-increasing length and weight of contemporary caravans and what manufacturers might be doing about it. Then, within a short space of time, I was presented with two offroad caravans (which are usually pretty heavy) where the manufacturers had obviously worked hard to keep the length and weight down, without comprising essentials such as structural strength and living space.

The Sunland Patriot 186 is one such van and is yet another design from the fertile mind of Sunland proprietor Roy Wyss. At first glance, it looks pretty familiar but it also has a few slightly unusual features, such as single beds, which improves the practicality of the layout.

Inside this Patriot 186 is where one of the more interesting features is found. Although the van is only 5.6m long (18ft 6in), Sunland has managed to achieve the popular front bedroom, full-width rear bathroom layout. And that hasn’t been done by compressing the kitchen or the bathroom, which is often the case, but rather by installing single beds up front instead of an island bed. 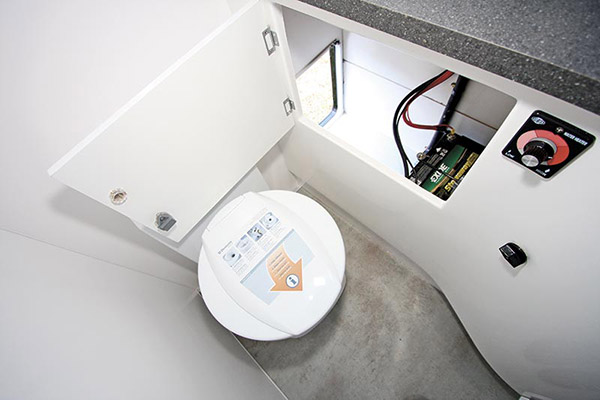 Another item of interest is the stepped ceiling that runs the full length of the caravan, in front of the overhead lockers. It changes the look of the interior in a positive way and fits in well with the contemporary monochrome colour scheme. It also has a practical purpose, being used for the lighting, cabling and air-conditioner ducting.

The front single beds are not the same length – and it does not require a tape measure to figure that out. The offside bed is a normal length but the nearside bed is considerably shorter. This is because the nearside bed has been designed to extend across the entry door. It’s not enough to totally block the doorway but it’s enough to make things difficult if it was extended all the time. In its extended position, it’s a decent length for a bed. Unfortunately, it means the bed has to be made up every night (and I am not a fan of that) but if you are looking for a shortcut, you could use something like a Duvalay to make the process quicker.

Overhead lockers are fitted all around the bedroom, except where the centre wardrobe sits between the beds. It also has a stepped shape and it comes with hanging space, mirrored doors, a drawer, shelf, and 240V and 12V power outlets. Windows on either side provide ventilation to this end of the van but, in addition, a 12V Sirocco fan is fitted between the beds and dinette to give all-round air flow.

The bench has a four-burner cooktop and grill, Sunland custom moulded sink/drainer and a decent amount of benchtop working space. Under the bench are four drawers of generous capacity and a large cupboard, complete with wire basket drawer. There are two lockers overhead, a classy looking Akril splashback, and the microwave is, pleasingly, located above the sink at a user-friendly height. On the opposite side of the van, the fridge fits neatly between the dinette and the bathroom wall. It comes with cupboards above and below but the latter is mostly taken up by the air-conditioning unit.

There are no real surprises at the dinette. It looks stylish, being upholstered in black leather and fitted with contoured seats, back supports and even wall cushions. A tri-fold table sits between the seats and comes with 240V and 12V outlets fitted below the table.

The bathroom has all the usual features: cassette toilet, shower cubicle and vanity cabinet which includes a top-loading washing machine. A point of note is the good-sized shower cubicle that includes a Sunland-developed drain. That might sound like a funny item to include, but not all water drains are created equal – some work better than others!

The cupboard in the offside corner is not really a bathroom feature, as the lower half contains the house battery. It might seem like a strange place to store the battery, but there is also external access and plenty of excess space if more battery capacity is required. The cupboard above is where items such as water tank gauges and 12V fuses are stored, but the largest item here is something quite new – a Giant Power 12V Integrated Power System, which replaces a number of individual electrical items (see breakout on p82).

The Sunland Patriot 186 ticked a lot of boxes for me. Yes, it is a single bed layout and one bed that has to be partially made up each night, but it’s still quite a clever idea. I have recently seen an even shorter Patriot model with a double bed, but it’s designed in a slightly different way to usual. For an offroad van of this length, though, single beds are really the only practical way to achieve a spacious layout while keeping both the length and weight down.

It should be noted that there are a number of very nice options fitted to this Patriot 186 which does affect the base price of $79,990 somewhat.