Perhaps I am being a bit alarmist but I believe caravans are getting heavier and heavier. That’s partly due to the increase in offroad caravan use but also partly due to the ever-increasing list of ‘essentials’ required for RV travel. Apart from anything else, all that extra weight means larger tow vehicles are required to pull it.

But there are a few caravan manufacturers who have obviously been thinking about this and are trying to do something about it. In some cases, they’ve made changes to the engineering of the van and, in other cases, they’ve taken a more direct route and made the caravan shorter.

Rhino Caravans’ Kenya is a good example of this approach. On the road, the Kenya tows in a very well-behaved fashion. Although my tow vehicle was a LandCruiser of an older vintage, it didn’t have too many difficulties. The chassis design, with its raised drawbar and good departure angle, helps for seriously undulating terrain. 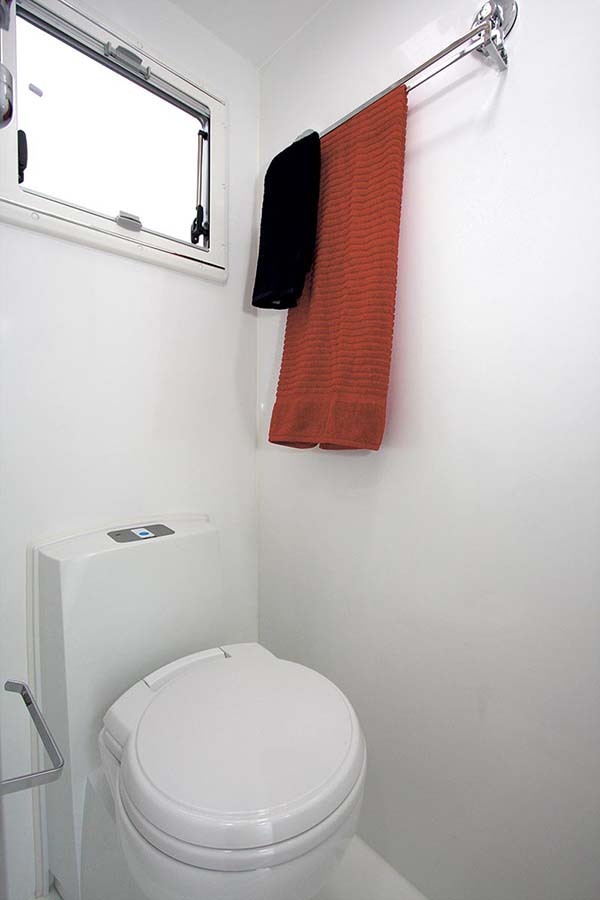 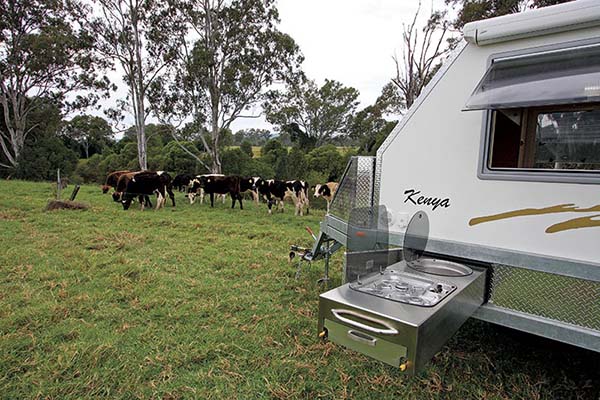 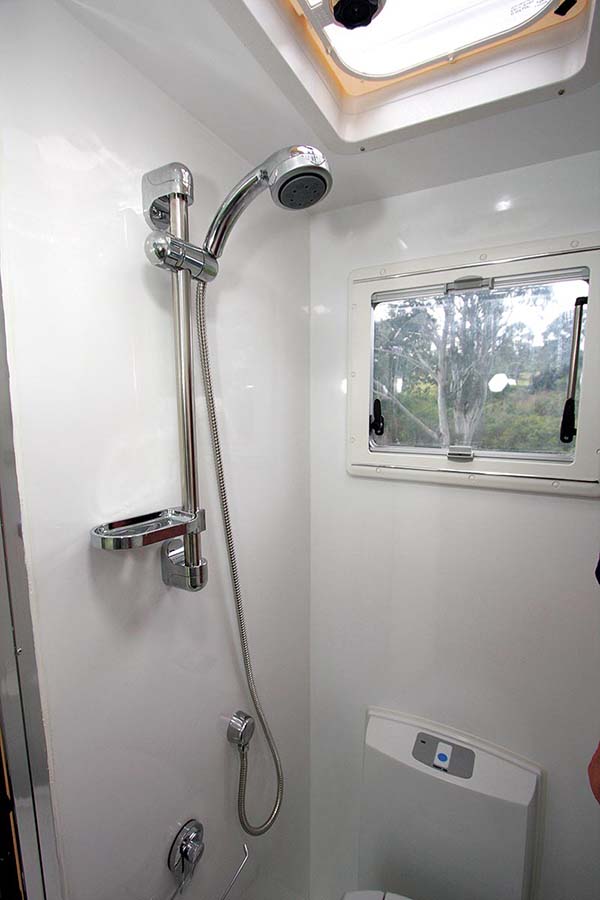 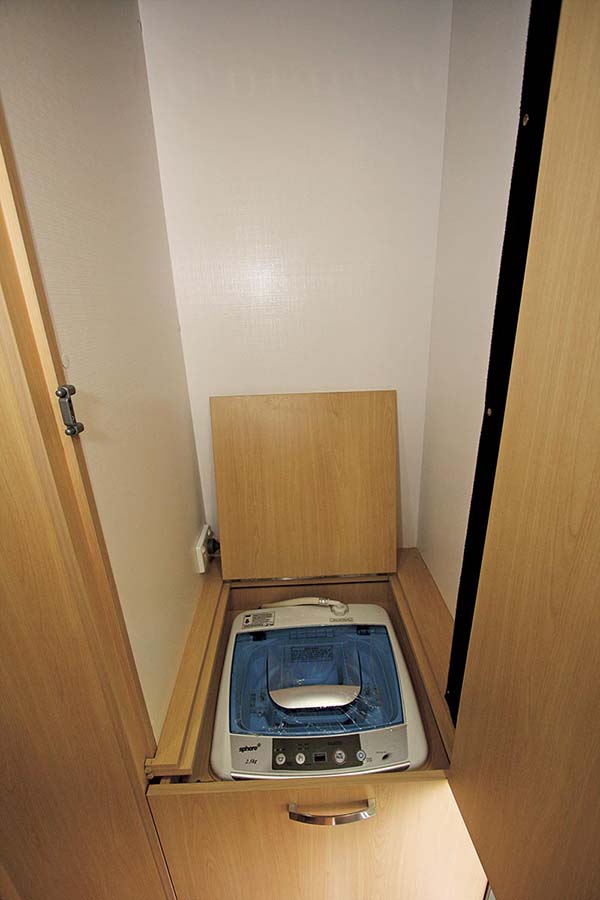 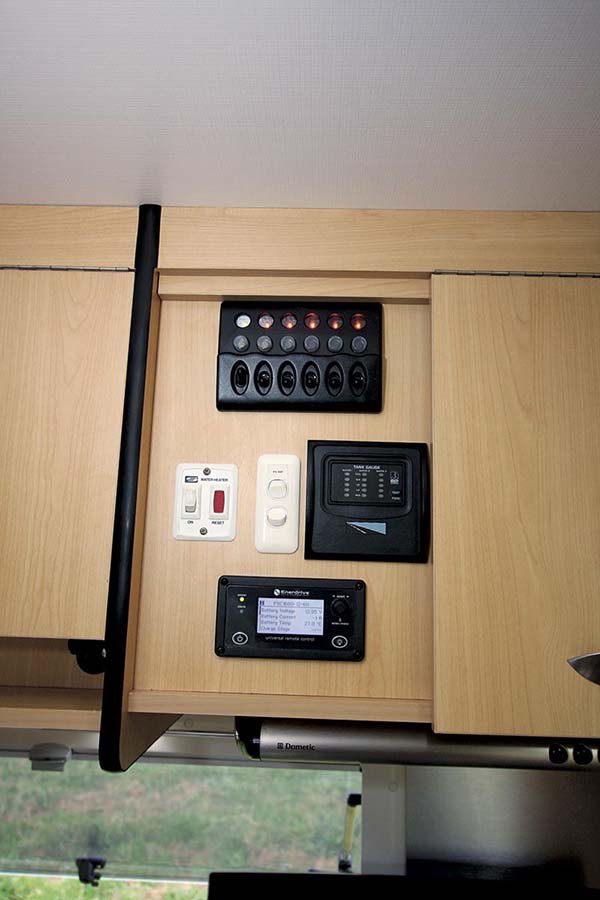 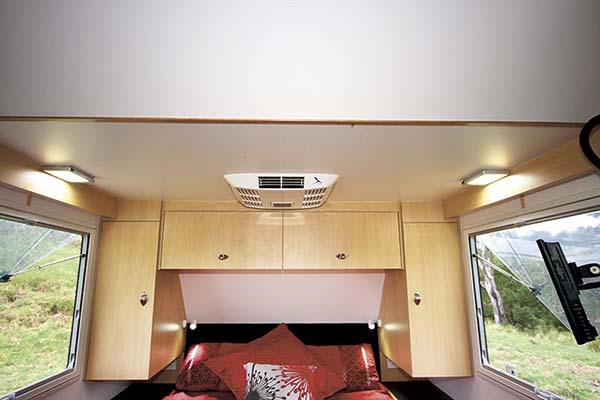 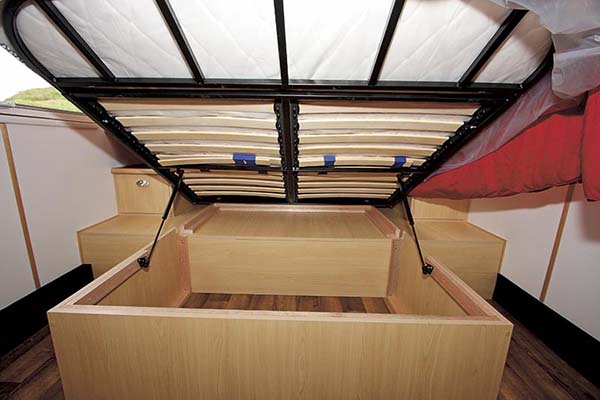 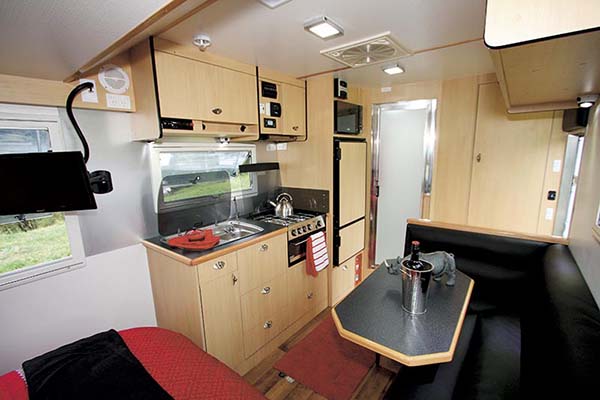 Setting up the Kenya didn’t take any longer than usual, although a brief and unintended liaison with the electric fence that kept me and the cows in the adjoining paddock separate was a bit of a surprise...

Instead of using a conventional frame, the Kenya is built using a 30mm thermoplastic honeycomb panel called Monopan, which is covered internally with 3mm plywood. Replacing the usual mouldings on all the edges, alloy checkerplate is used on the roof, front and side walls while, at the rear, the raised section across the top and down the walls looks quite effective.

Up top, the Kenya has a stepped design with the front of the van being lower than the rear, resulting in the forward-mounted air-conditioner almost sitting flush with the main roof profile rather than sitting well above as it normally would. This is not only practical but it looks good, too. Some things have to be standard and these come in the form of the large Seitz hopper windows and the Camec triple-locker door.

As well as the drawbar-mounted storage bin, which provides most of the external storage, there is a partial front tunnel boot, accessible from the offside. The nearside door opens to reveal a slide-out, camper trailer-style kitchen bench. Made from stainless steel, it comes with a combo three-burner cooktop and stainless steel sink along with a drawer which doubles as a bench extension. The external slide-out kitchen is a concept commonly used by camper trailer manufacturers but it is equally at home here. On fine days, all the kitchen cooking odours can be left outside.

Stylish LED light fittings keep the interior well-illuminated. A look inside the cupboards and lockers reveals everything to be neatly finished and fittings such as the overhead locker struts are quality items. A 15mm bonded ply is used for the cabinetry work, with beech laminate on both sides.

Given the stepped profile of the roof, the front bedroom has a lower ceiling height at 1.8m (5ft 11in) than the rest of the van which comes in at 1.99m (6ft 6in). The island bed, measuring 1.86x1.39m (6ft 1in x 4ft 6in), has a posture slat bed base and lifts easily enough to get to the storage area underneath. This space isn’t full length because of the tunnel boot. It’s easy to get around on the nearside, as it’s at the open end of the L-shaped lounge but there’s a bit less space on the other side, where the kitchen bench happens to be.

Given the shape of the Kenya’s front, the bedhead is a more simplified design than the usual, with wardrobes on either side and a bedside cabinet and drawer. Having the wardrobe ‘hanging’ from the roof allows for a bedside shelf on each side. Large windows on either side of the bed give good cross-flow ventilation although, like the rest of the van, there are no curtains on the windows, just the integrated screens and blinds.

Due to the shorter van length, the kitchen is relatively small but it’s still very workable. A Thetford four-burner cooktop/grill sits alongside a stainless steel sink/drainer. Both have smoked glass lids – a good idea, given the lack of any other benchtop space. For under-bench storage, Rhino has sensibly opted for three good-sized drawers, rather than cupboards, and a wire basket slide-out pantry. Two overhead lockers offer further storage, as do two floor lockers, one of which contains the water heater.

Between the overhead lockers is a panel containing the 12V and hot water heater switches, as well as the water tank LED gauges and an Enerdrive battery monitor. Under the forward overhead locker is a radio/CD player and a small shelf with 12V/5V outlets for charging all those essential devices that we don’t seem to be able to do without these days.

Adjoining the bathroom wall is a Novacool 175L fridge with microwave above. The fridge is the upside-down style, with the fridge above and freezer with drawer storage below.

Like the kitchen, the dinette is not oversized but two people should be able to fit around the table without too much trouble. Although it’s fitted with the open end towards the bed, that works well in this instance, especially as it results in a small shoe locker by the entry door.

Although it looks like the Kenya comes with a full-width rear bathroom, it actually doesn’t. That is mainly because the rear nearside corner has been used for a wardrobe with plenty of hanging space in the upper half and a top-loading washing machine in the lower half. The latter is on a slider, so it can be used inside or outside the cupboard.

That leaves the rest of the offside corner for the bathroom. It is spacious enough to have a Thetford cassette toilet, a variable-height, flexible-hose shower and a wash basin. Ventilation is handled by both a ceiling vent fan and a small window. While it has been slightly shrunk in size because of the adjoining wardrobe, I don’t think it is too much of a compromise.

What has been achieved within the Kenya’s 4.86m (16ft) body length is quite surprising. The large windows aid space perceptions no end. It is a front bedroom, rear bathroom set-up and some things have been compressed to fit but the end result is still supremely liveable.

The Kenya’s size and weight makes it good for offroad touring and remote travel, especially as it comes with everything you need, including a grey water tank – somewhat of a rarity! The Kenya is just great for self-contained travel.