The Eurostar began life two years ago as the ‘Caravisio’, a study of the caravan of the future first displayed at the world’s largest caravan and motorhome show – Caravan Salon Dusseldorf – in September 2013. Back then, it was just a shell and, while A’van founder Jeff Van Baardwyk and his sons Scott and Jeff wanted it for Australia, there were no plans to build a version for right-hand-drive markets.

There also weren’t any other Knaus luxury models with a separate shower and toilet ensuite to borrow from, and the combo unit fitted to the smaller and cheaper Knaus Sudwind and Sport models that A’van planned to sell alongside it,simply wouldn’t cut it with Australian buyers in a caravan that was going to be priced well north of those. In the end, an elegant solution was found by mirroring and grafting the interior of a new model Tabbert 655DF into the Eurostar’s smooth GRP monocoque body. The trouble that Knaus-Tabbert took to reconfigure the Eurostar for the potentially small Australian market is an indication of the regard they have for A’van and the persistence of the Van Baardwyk family.

So, finally, a complete Knaus by A’van Eurostar was finished only hours before this year’s Victorian Caravan Show, wearing a price tag of $86,000 and a ‘sold’ sign within a few hours of the show opening. However, its dealers soon told A’van that, based on feedback, the Eurostar was underpriced and looked more like a $100,000 caravan. So, by the time Caravan World got its hands on that first pre-production prototype, the RRP of the Australian ‘customer’ versions with more equipment had risen to $97,000. Our aim was to see whether its beauty was more than skin deep. 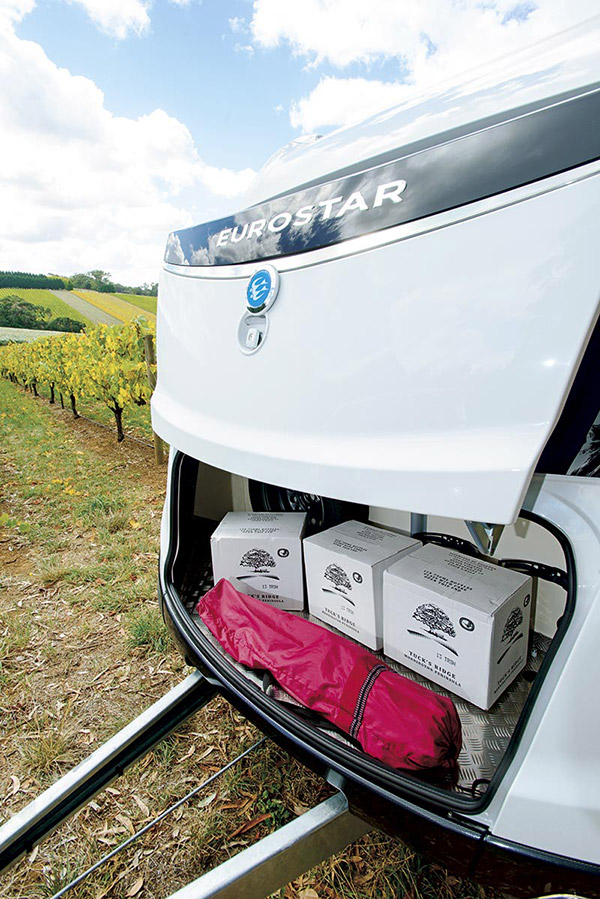 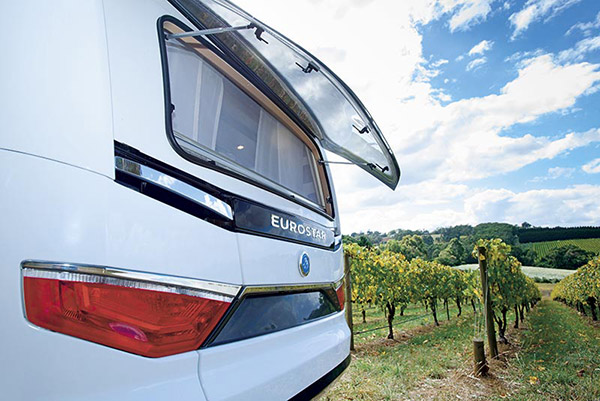 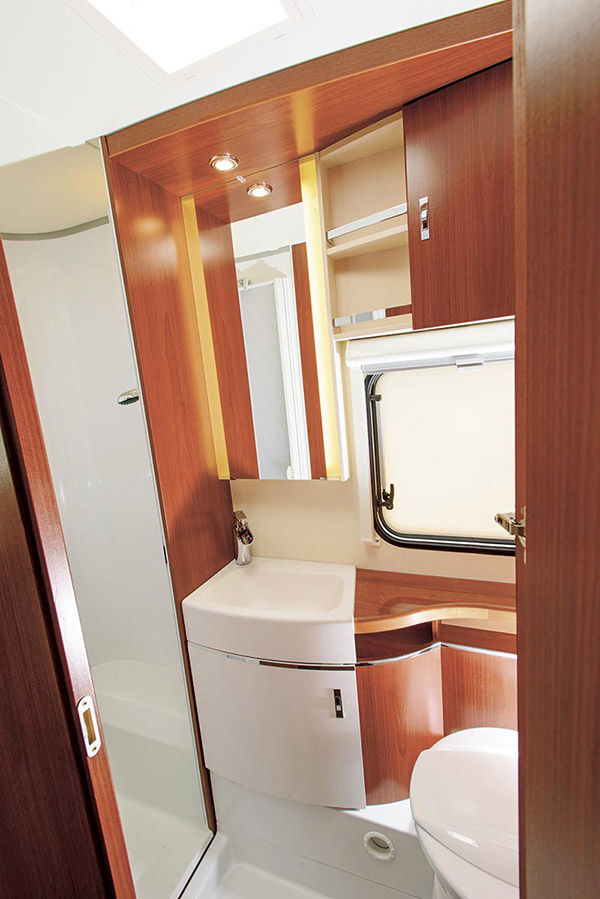 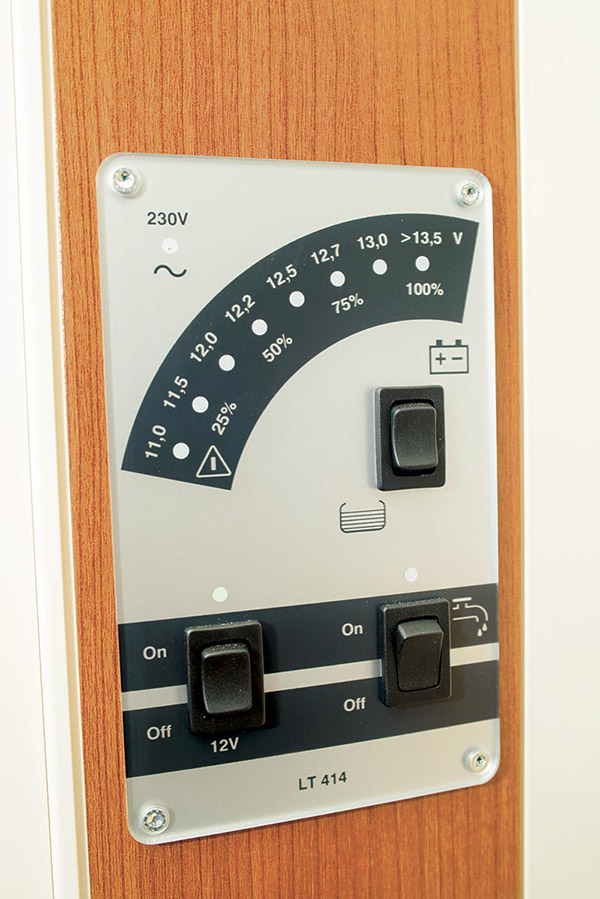 The ‘entertainer’ layout starts with the Eurostar’s large cream club lounge with a centre table that offers plenty of space for a social gathering with friends for canapés and Champagne. However, dinner really has to be pre-prepared, as there is very little serving or plating space beside – or opposite – the large Spinflow three-burner gas cooktop and its adjacent, shallow stainless steel sink and mixer tap. No grill or oven either, although a microwave will be standard. Conversely, there’s good storage space below in the soft-close slide-out cutlery, crockery and pot drawers, the standard Dometic 190L three-way fridge and in the cocktail cabinet next to the barn-door-style two-piece entry door. But this isn’t a family van and its owners are unlikely to spend every night cooking up a storm in the upmarket caravan park in which you might find it parked.

The bedroom is everything you would expect: elegant and stylish. As there is no front window, the wall is taken up by a glamorous bedhead with partitioned cupboards overhead. The hanging robe is located next to the fridge, giving the bedroom an open-plan feel.

I have a small quibble here with the sliding timber door that divides the sleeping area from the rest of the van – it has no floor guides, so it flops around on its upper hanger when closed –  and the ‘curtains’ are faux coverings that serve no purpose except to get in the way of the real bedroom windows, which are quite large and have sliding blackout and insect blinds. But back on the good side of the ledger, there is relatively unencumbered storage room under the island bed.

The separate shower and roomy toilet ensuite with separate vanity are distributed along the nearside of the central passage that leads to the front bedroom and there is generous space and quality fittings in each. However, there is no room for the washing machine – an item now so beloved by Australian travellers that barely any caravans priced above $50,000 leave the factory without one installed or on the option list.

The Knaus Eurostar had me at ‘hello’, and it made me question what an Australian van could or should be. We sometimes assume that most people who buy a touring caravan want it for enjoying the caravan park lifestyle, will want to free-camp occasionally, will want to dine inside or barbecue outside, and will want to wash their clothes on-board in their spare time.

But what if you thought of your caravan as an alternative to a yacht, or a holiday apartment, or simply as something beautiful, like the other things that you might like to fill your life with? And what if you simply wanted it to be your elegant and upmarket road-going base, like a luxury apartment, from which to access the other good things in life, such as yachting on the Great Barrier Reef, up-market excursions, regional restaurants or great wineries? The Eurostar gives you instant access to that lifestyle.

Sure, there are some lesser features – most of which A’van are aware of – and it’s at the pricey end of the market for a caravan of its size, but the people likely to put their spare cash, savings or the alternative to a deposit on a holiday home, are not your typical caravanners. They are a new, expanding demographic and I am sure they will love their Eurostar.