Is the J-Pod a camper or a caravan? Jayco has blurred the line with the new teardrop-shaped hard-shell model that has just joined its extensive RV range. Jayco Australia founder Gerry Ryan has very few flops on his RV CV since founding the company 40 years ago in 1975, and the J-Pod is very much Ryan’s ‘baby’.

But what’s interesting is that the J-Pod, rather than being a design breakthrough, brings fresh air to a style that has been around in Australian caravans, in one form or another, since the 1930s. Lightweight, teardrop, timber-clad or fibreglass shell campers designed to be hauled by virtually any car are not especially new in Australia. A’van got the ball rolling almost three years ago with its comprehensively equipped Weekender Camper. Aussie Teardrop, Gidget and others have since joined the market, producing different variations on the same theme.

Enter the J-Pod. Whether you consider it a new entry step into the Jayco family, which otherwise starts at around $16,000 for the Swift camper, a defensive move against the growing ranks of canvas-topped camper trailers, or a sixth sense that the pod market is about to mushroom, Australia’s RV market leader is now officially in it. 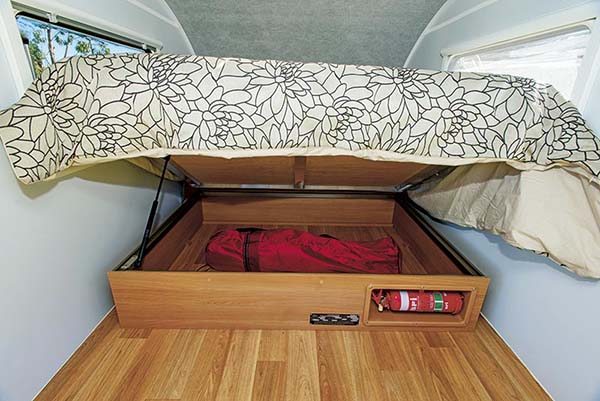 The J-Pod is pretty basic and a peek underneath confirms that, while it’s light enough at its Tare weight of just 485kg and ATM of 749kg, to be hauled by just about anything, it’s under-body architecture, simple underslung leaf spring suspension and lack of brakes, make it unsuitable for going anywhere challenging. But that’s unlikely to be a handbrake for the couples with small cars that will see the J-Pod as the perfect excuse to bypass canvas in the camping scene. There’s also the possibility that Jayco may make the J-Pod available in its optional, rough-road Outback spec.

Perhaps I’ve forgotten some of the joys of tent camping, but the optional and bulky rear annexe made by Napier Australia – unfortunately supplied without instructions or even a diagram of how it should look erected – had photographer Stu and me stumped at first. However, once we worked out that we had assembled it 180º from its correct direction, it fell into place quite easily. Newcomers should allow 30 minutes with a patient friend but, once experienced, you could probably halve this time.

The tent, with its sewn-in floor, is in two parts; the first overhanging the top-hinged, strut-assisted rear hatch, attaches to the van body with press-studs for a good weather seal and is fitted with a separate zip closure that would suit a couple for an overnight stop, while the larger zip-on rear section that it held aloft by twin sprung bows, provides a much larger living area. Large fly mesh windows give the sense of even more space by allowing in plenty of light.

If you’re planning anything more than a weekend away, you’ll need to use the body of the J-Pod for storing the tent and other camping gear, as the shallow under-bed space and the area beside it, accessed by twin external hatches, are best reserved for folding tables and chairs. There’s no water supply, no kitchen as such and no provision for a portable fridge, or a separate battery to run it, but these may appear later on the option list, as Jayco freely admits the J-Pod is a work in progress.

Towing the J-Pod is as easy as its size and light weight suggests. At its maximum laden weight of less than 750kg, it doesn’t require brakes, while its narrow width obviates towing mirrors. And one person can lift it on to its simple ball hitch. There’s nothing fancy about the simple leaf spring suspension and, when empty, the J-Pod bounces over bumps, rather than riding them, but a little weight from camping equipment and the like has a reassuring settling effect on the chassis and it tracks well at highway speed.

So that’s the J-Pod. A simple idea with loads of potential. Rather like the original iPod and iPhone until the developers started brainstorming on the possibilities, just think of it for the moment as an affordable, fun, hard-shell camping experience. And watch
this space!