Coronet’s hands-on owner and RV industry stalwart Andrew Phillips was born into a caravanning family. His parents ran a hire fleet of 80 vans in the 1970s and 80s and Andrew has lived, breathed and holidayed in caravans since. He built his first van when he was just 14 and hasn’t stopped, regularly travelling overseas to look at new trends and products.

So it’s not surprising that many seasoned caravanners find themselves on Coronet’s doorstep when they know what they want, but need someone very experienced to build it.

That’s where Victorian couple Allan and Roslyn Macinnes found themselves when they decided that their 6.4m (21ft) full-height touring caravan was limiting where they could venture on their travels. So, based on their experience, they drew up the base spec of the smaller touring caravan they wanted. It needed to be a tandem-axle with an external body length of around 5.49m (18ft), a full separate shower and toilet ensuite, and a pop-top roof. 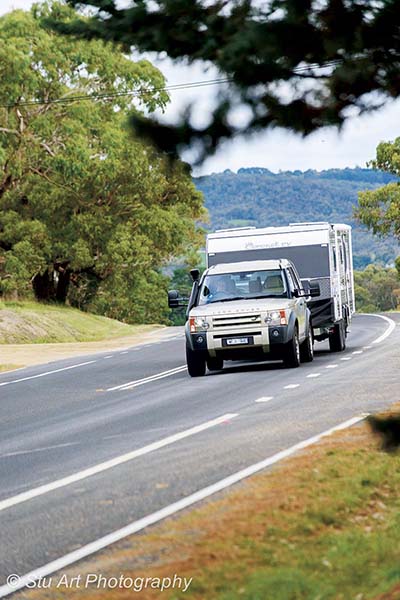 The latter was not just for ease in accessing bush campsites, but also to fit inside their shed at home, as their previous full-height van had to be stored off-site. Then they went shopping, armed with a shortlist of respected caravan builders but, after being told by several that they couldn’t build what they wanted in that size, they found themselves talking to Coronet.

It was not a surprising outcome. Coronet has a reputation as a pop-top specialist and about 75 per cent of all the caravans it builds in its Bayswater factory are pop-tops. Moreover, the 5.65m (18ft 6in) XT-2 series 5650 tandem axle pop-top is Coronet’s top-selling offroader. Coronet does build larger offroad caravans to order – up to and beyond an external body length of 24ft (7.3m) – but those longer than 6m (20ft) are only available as full-height caravans. However, the Macinness’ not only wanted a pop-top, but a low one at that, without any protrusions on the roof, such as an air-conditioner, or even a ventilation hatch or TV antenna, so the Coronet XT-2 5650 that resulted incorporates custom solutions to meet those particular needs.

Lower body checkerplate is topped on the van’s front by padded foam, rubber-backed stone shielding extending almost to the pop-top, and there’s an easily-removable truck mesh shield ahead of twin 9kg gas cylinders. The exterior water tap is stone-protected and the rear PVC waste pipe is sheathed for similar protection. Twin exterior 240V power outlets, a profusion of 12V sockets both inside and out, a convenient exterior wall-mounted gas bayonet, and an access hatch for the tail-mounted Attwood hot water service showed the attention to detail that you get from an experienced builder. An optional  ‘scupper’ hatch on the forward section of the pop-top roof was also fitted to pressurise the interior and keep dust at bay on unsealed roads. Because the van will be used extensively for free and remote area camping, it came with an optional Truma gas heater, while a 55L grey water tank was fitted in anticipation of future national park regulations.

Tasteful dusky tan leather replaced the usual cloth upholstery on the central L-shaped dinette, a 2.5kg top-loading washing machine slides out of a cupboard in the centre of the ensuite and an oven for roasting on the road is fitted below the standard Thetford Caprice combo four-burner cooktop. Another interesting space-saving addition was the hinged ‘wings’ fitted to each end of the galley that fold out of the way when not required, adding valuable plating-up space to the otherwise compact kitchen. I thought the swivelling rectangular dining table was a little skinny, but it could be specified a little wider if another owner wanted this.

What made this pop-top really usable for me was its relatively high wall height, which allowed easy access to the full internals of the XT-2 without raising the pop-top roof, thanks to my 18th century architecture (read: 172cm height!). Taller owners will need to stoop a little, but it’s feasible to do an overnight stop without popping the top if the weather and circumstances require this. The reverse is true when you want to raise the roof, as shorter users will need a small step or a tall friend to undo and secure the four roof latches.

The other clever feature of all Coronet pop-tops that users of all heights will appreciate is the way the rear ensuite is separated from the rest of the van. Instead of a stiff folding skirt that rises and falls with the roof, Coronet has three hinged timber panels, two of which lock into their adjacent walls via sliding bolts, while the one on the door is held in a vertical position by an over-centre catch. It’s a touch of class that makes a Coronet pop-top almost as cosy as a full-height van. The roof also lifts easily (thanks in part to not having an air-conditioner on top of it) – a plus for shorter or older users.

The best news is this experience, customisation and attention to detail doesn’t cost the earth. A base-spec XT-2 5650 pop-top costs $59,999 delivered in Victoria and, even with all its extras and customisation, the XT-2 reviewed topped out at just over $66,500. That’s not a lot of money to get exactly what you want.