The Millard Breakaway is an offroad caravan that boasts numerous unique features. Fairly conventional are the Dometic double-glazed windows, Camec security door and Dometic awning. However, there are a few more external storage bins than normal, as well as a large checkerplate storage bin on the drawbar. The front boot with twin hatches is larger than usual and had what at first appeared to be a new style of see-through door. In actual fact, a temporary shortfall on conventional bin doors prompted Millard to fit the model on review with windows instead – a novel idea, to say the least. In addition to these front doors, there is also side access to the boot for something like a generator.

Also along the nearside are three doors – one for the suspension airbag controls, one for an entertainment unit and one for a picnic table. Even the rear wall has storage facilities, with a dual rail bumper bar for the spare tyres and a set of recovery boards.

Behind the bumper bar is a small diesel tank for the Webasto water and space heater. Even the chassis gets in on the storage act and, in addition to housing the water tanks, the offside front rail gets used for storing the batteries in alloy checkerplate boxes. 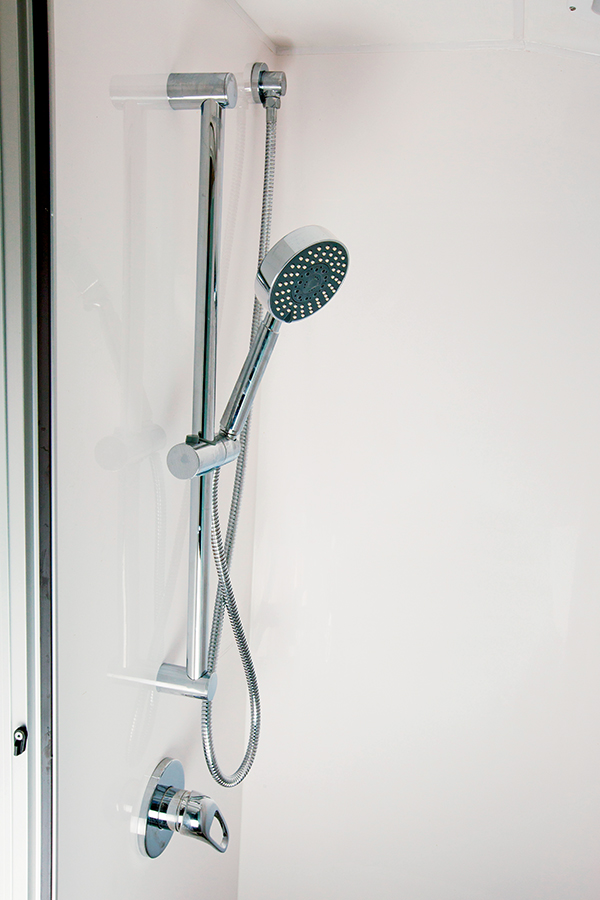 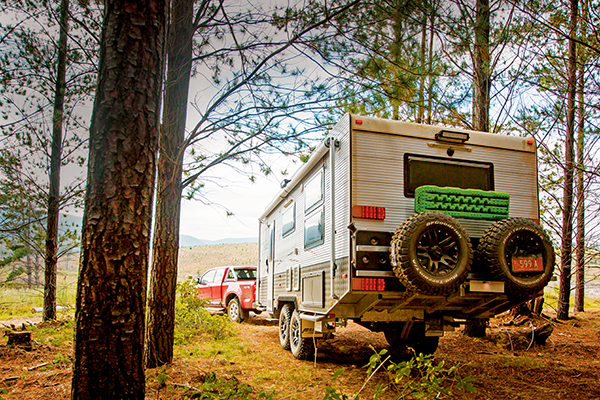 The hot-dipped galvanised chassis is very conventional for an offroad caravan. The chassis rails are 150x50mm 6in RHS to which 6in RHS A-frame rails are welded. The drawbar and chassis rails are 3mm thick and are galvanised. Adding to rigidity (and to weight) are longitudinal and lateral box-section steel supports.

Bolted to the chassis rails is, of course, the tandem-axle airbag suspension, which is height adjustable. It comes fitted with the usual trailing arms, airbags and dual shock absorbers for each wheel. Although it’s certainly not legal to travel inside a moving caravan, anyone who has travelled in a motorhome fitted with airbag suspension will know just how good it is.

This Breakaway has a slightly different internal layout to the common front-bedroom, rear bathroom design. In fact, it’s basically the reverse. It features a front bathroom, rear island bed with a nearside kitchen bench and offside dinette fitting in between. So stepping in through the front entry door, the bathroom is to the left and everything else is to the right. It has been fitted out in a white, light brown and mottled-laminate colour scheme, and the interior also features burnt orange upholstery on the dinette which is a nice touch.

The bed is surrounded by windows and the ones on either side are actually two smaller windows stacked one above the other, rather than one larger window. This means the same amount of light and fresh air is let in but these are better for security. Surrounding the bed is the usual arrangement of bedside wardrobes, cabinets and overhead lockers. Lifting the bed gives access to the storage space underneath, part of which is taken by the Webasto diesel-fired space/water heater – highly recommended on cool nights!

One of the first things that catches the eye when stepping into this Breakaway is the Waeco 215L fridge, because it’s located directly opposite the doorway. Instead of the usual microwave above, there’s a good-sized cupboard instead.

Fitted into the nearside kitchen bench are a stainless steel sink and a Webasto diesel cooktop. These, in case you have never come across one, are fired by diesel, not LPG. Indeed, this is a gas free van, no cylinders or gas lines to be found, which some consider an advantage. However, diesel cooktops require a little more patience from the chef – there are both warm-up and cool-down times and they demand a slightly different style of cooking, particularly as there are less burners and no grill or oven.

Also fitted in the kitchen are a good selection of drawers, cupboards and overhead lockers. Some of the overhead locker space is taken up by the microwave and the satellite receiving gear. There are also 240V powerpoints along the kitchen bench, which might seem odd in an offroad caravan but some are inverter supplied.

Opposite the kitchen bench, the cafe-style dinette, with its stand out upholstery, comes with seat backs and wall cushions. The tri-fold table can be lifted in or out as needed and it comes with a shelf below. Like the kitchen bench, there are a couple of mains powerpoints and the all-important (for an offroad user) 12V and 5V USB outlets. Above the dinette, the overhead lockers offer storage space plus a mounting point for the radio/CD player.

The front bathroom features a nearside shower cubicle, offside Dometic cassette toilet and a vanity cabinet that fills the rest of the front wall space. The latter not only includes a wash basin, drawers and cupboards but also a front-loading washing machine. The washing machine did make it a bit awkward getting to the basin but apart from that, it was a well designed and executed bathroom.

There is no doubt that this Millard Breakaway is a seriously well kitted-out offroad van. It has a well-designed layout, doesn’t lack for anything in the fittings and appliances departments and comes fully-appointed for serious, remote offroad travel.

However, you should keep in mind that all those goodies do add weight and a fairly heavy-duty tow vehicle would be necessary for comfortable and safe touring with this Millard Breakaway.