Until a few years ago, just about all caravan manufacturers in Australian used similar methods of caravan construction. Going back a decade or so, most used a steel chassis with 100x50mm (4x2in) rectangular hollow section (RHS) main rails and drawbar with a ball coupling up front. Above the chassis, the body usually had a timber frame or, in some cases, an aluminium frame, with aluminium cladding covering it. Glass hopper-style windows were common and security doors were beginning to appear. Leaf spring suspension was almost universally used.

That basic method of construction is still used today, but often with considerable variations on the basic formula, including much heavier chassis and independent suspension.

An alternative method of caravan construction, largely used by European manufacturers, has become more prevalent recently. Chassis construction is considerably simpler; often just two rails with a couple of cross members. Frequently, a frameless method of body construction is employed and the body is much more of a monocoque structure. Fibreglass composite panels or moulded fibreglass is used for the external body panels. 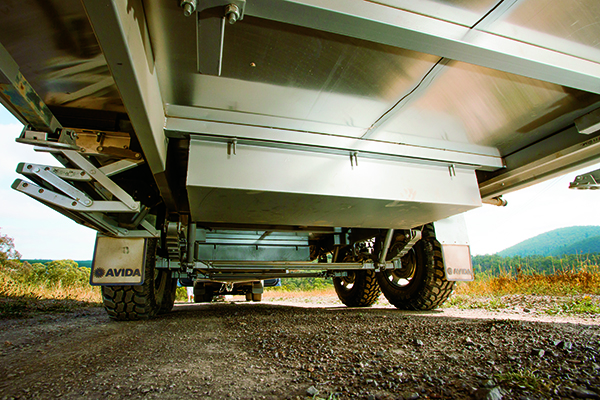 If there is any disadvantage to the Australian method, it’s the extra weight. Offroad caravans, in particular, can be very heavy. Several local caravan manufacturers have been taking note of the European approach and have decided to try something a little different. A good example of this is Avida. Well-known as Australia’s largest motorhome manufacturer, Avida delved back into caravan construction a few years ago, after a long absence. After looking at both the traditional Australian method and the European approach, Avida now employs both methods of construction in its caravan range.

Here at CW, we have often discussed which method might be better and the relative advantages and disadvantages of each. In order to put this to the test, we borrowed an Avida Topaz Multi-Terrain composite-clad caravan from the Avida factory and a traditionally-built Millard Breakaway offroader from Camden Caravans, to have a look over them both.

Although the Avida Topaz was fitted with leaf spring suspension, optional independent is available. And while the Millard Breakaway was definitely kitted out as a serious offroad van, Millard also offers lighter duty vans built in the same way. Both vans were fitted with Vehicle Components’ DO35 offroad coupling.

A look under the Avida Topaz reveals a remarkably simple chassis riding on Al-Ko roller rocker suspension fitted with shock absorbers (Cruisemaster independent is optional). DuraGal 150mm/6in RHS is used for the main and drawbar rails. However, there are considerably fewer cross members than the usual number, and the chassis is not built in the common box-section style. That’s been done specifically to cut down on weight but retain the strength. According to Avida, much of the overall strength has been built into the caravan body, rather than the chassis; so much so that the body can be lifted off the chassis without any damage.

Forming the base of the body is a one piece 45mm sandwich panel floor that is lined with protective aluminium on the underside. The walls sit on the floor, not beside it. Similarly to the floor, both the walls (33mm) and roof (45mm) are one piece and also made using sandwich panel construction with no frame.

The van has no frame at all, neither timber nor aluminium. The roof, walls and floor are all interlocked together to form a strong box. The interlocking means the joints are fully captured in an aluminium channel, bonded and screwed together, then sealed.

Avida is keen to promote the strength of this by showing an image of one caravan sitting on top of another! The chassis and body are bonded and bolted together through engineered fastening points.

Like other RV manufacturers Avida has invested hugely in CNC machinery, including a 12m rolling machine to ensure accurate fittings of everything from walls to cabinetry.

Like a traditional separate chassis 4WD, the Millard Breakaway sources most of its strength from its chassis. The chassis on this heavy (2895kg Tare) offroad van is about as solid as you can get for a caravan built with traditional construction. The chassis rails are 150mm (6in) deep by 50mm (2in) wide RHS, and the 6in RHS A-frame rails are welded to these. The drawbar and chassis rails are 3mm thick and are galvanised. Adding to rigidity (and to weight) are longitudinal and lateral box-section steel supports.

Some manufacturers pay more attention to the chassis than the general body construction of the van, particularly with offroaders, but Millard takes a slightly different approach. The frame of a traditional caravan is made of a timber, with most manufacturers choosing a light hardwood such as meranti. However, Millard frames its vans with interlocking C-channel aluminium with bracing gussets at stress points. Timber is used as reinforcement where items are fitted either inside (such as cabinetry) or outside (such as picnic tables). A box-section 3mm-thick steel H-frame is fitted across the roof to support the air-conditioning unit. The roof of a Millard van is not clad with aluminium sheeting, but rather, it is a one-piece fibreglass sheet with ply lining underneath.

The floor of the Millard is 12mm marine plywood, a common choice with traditional caravan construction. Between the plywood and the chassis is a layer of galvanised sheet aluminium, giving protection to the under-floor area. Heavy-duty vinyl is glued to the floor and over the galvanised steel wheel arches. Wiring is fed though the aluminium wall bracing with nylon grommets to avoid chafing and eventual short-circuits. The wires underneath the van are fed in though the chassis rails to avoid the potential for damage.

Suspension on this Millard offroad van is an independent trailing arm design, supported by air springs and controlled by twin dampers at each wheel. The air springs are adjustable, giving raised ground clearance when needed.

The Millard is a heavy caravan, no doubt about it. With a Tare weight of nearly 2900kg, it was well within our Holden Colorado’s towing capacity (3500kg) as we towed it empty but, on slippery surfaces, you sure knew about it.

The Millard was assertive about where it wanted to go, and it wasn’t always where the Colorado driver intended.

Part of this can be put down to the fact that we were towing with utes. These utes are designed to take a substantial payload in their trays so, with empty trays, you can expect the weight over the rear axle to be less than ideal.

Also, these tow vehicles were shod with standard highway-terrain tyres. With suitable all-terrain or mud-terrain tyres, the grip on slippery offroad surfaces would improve dramatically.

The Avida’s lighter footprint was immediately apparent: it towed with much less desire to push the tow vehicle around.

The Millard was heavier than the Avida by nearly 800kg. Granted, it did have a large number of extras fitted to it but that weight is definitely a factor for consideration. And although both our tow vehicles had the necessary maximum towing mass for both vans, there’s no doubt the Millard van was much heavier than both vehicles and, on gravel roads, it was a little disconcerting as it pushed the rear of the tow vehicle around. Leaving 4WD constantly engaged was mandatory, but we reckon that having a tow vehicle heavier than the caravan is an asset. In this case, the Millard is definitely in LandCruiser 200 Series territory.

It’s clear from the research we did for this article that there are a number of alternative ways to build caravans. In this particular case, Avida’s contemporary method gets the weight down but still results in a capable rough-road or multi-terrain (in Avida’s words) van. We say ‘rough road’ because, while Avida make no claims about its vans going fully offroad, rough road is probably the closest many of us will come to getting off the bitumen.