There’s nothing quite like Australian Off Road’s Matrix – a full-height, true offroad caravan with an internal shower and toilet, retaining the width and wheel track of a full-size 4WD tow car. Its closest market rivals either pop-up or expand, while other equally capable offroaders are generally wider.

So if you already had the advantage, why would you completely redesign the chassis (shaving 40kg from the Tare), increase the internal length and modify the already-distinctive bodywork leaving only the roof untouched?

Well, you can blame AOR founder Steve Budden’s determination to set the pace in this niche of the offroad market as well as, in part, the Matrix’s big brother, the tandem-axle Aurora. 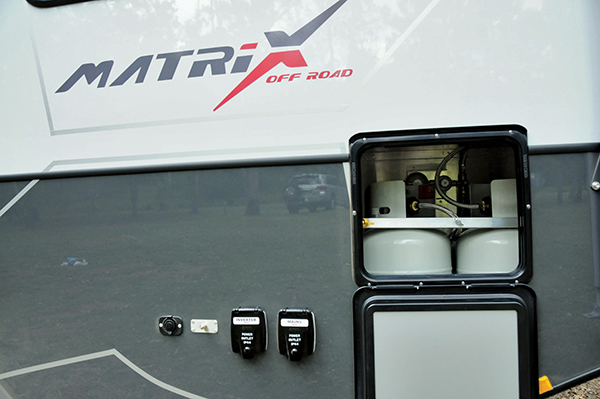 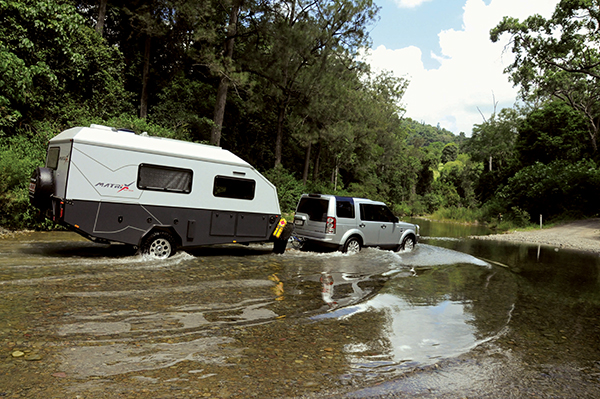 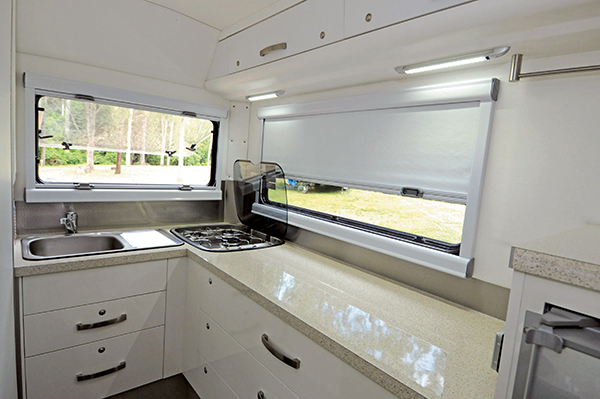 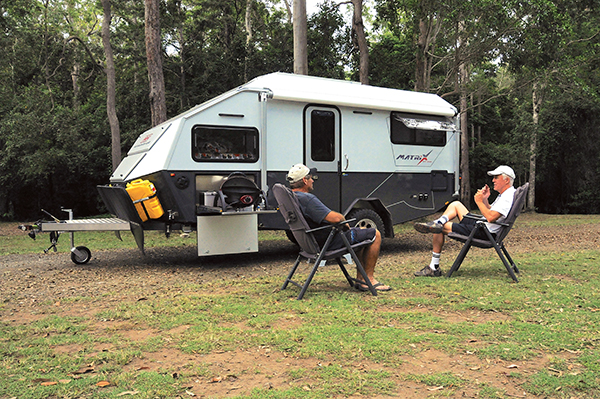 After significant research into the aerodynamics and weight-to-strength performance of the Aurora offroader, Steve realised he could improve upon AOR’s single-axle van as well. The Matrix Series IV is effectively a trickle-down of Aurora ideas applied to a compact offroader.

Let’s start with the all-fibreglass body, which is 1.5m narrower and 8m shorter than the Aurora, and has a new wedge-shaped front that extends as far as the separate storage box on earlier models. It incorporates a large lockable boot and front quarters that taper in sharply to the side panels.

The twin angled jerry cans on each side and the Webasto heater’s diesel tank behind a heavy truck-mesh stone shield, plus a checkerplate stone shield/step atop the A-frame of the Matrix’s high-tensile steel, laminated and powder coated chassis, are also Aurora styling cues.

The interior layout is much the same as with the previous Matrix, with the high-mounted fixed bed to the left of the entry and the dinette opposite, facing the van’s standard 110L EvaKool 12V compressor fridge.

Further rearward, the L-shaped kitchen with its standard three-burner cooktop, stainless steel sink and drainer sit under the opening rear window, with large and truly impressive bench space on the side return next to the fridge. Similarly, the combined shower and toilet cubicle in the right-hand rear is remarkably spacious.

Travelling with the new Matrix IV is as easy as with its predecessors. There is loads of exterior storage space. Apart from the new cavernous and well-shaped boot, there are two separate storage areas on the right-hand side: a 350L slide-out bin and an adjacent 277L locker. And, if you don’t use the front left-hand locker to house a kettle-type barbecue or optional slide-out stainless steel kitchen, you could have a separate tunnel boot there.

Inside, there are six storage drawers under the foot of the bed and five large drawers under the kitchen benches, while cupboards line the upper sides but, curiously, not the front or rear of the walls. However, with the tapered upper walls, there is not a huge amount of storage space there.

The white vinyl cladding of the fibreglass cupboards and the choice of premium cupboard hardware gives the Matrix a high-quality look that sets it apart from other compact offroad vans.

Apart from its focus on quality and attention to detail, AOR also prides itself on offering new technology options to its customers.

An example is the marine-type macerator electric toilet fitted as standard, which doesn’t use chemicals and allows waste to be stored in the 110L holding tank when travelling. Based on average usage, this equates to about nine days’ use – enough for most national park stays – and because it doesn’t use chemicals, the tank is easier to empty than a conventional cassette toilet. The storage tank has its level monitored by sonar, too, so you know exactly when it’s time to empty it.

Until I encountered the Matrix Series IV, I found it hard to envisage how this unique narrow-bodied, full-height and fully-equipped offroad van could be improved.

But it has been – in a number of important ways. Bigger inside but not overall, with better aerodynamics, more storage space and even a weight reduction, it continues to stay ahead of the game thanks to Steve Budden’s obsession with detail and refinement.