Jayco, being Australia’s largest caravan manufacturer, is in the envious position of being able to offer the largest range of layouts and designs in all styles of vans and pop-tops. Readers will probably be familiar with the entry-level Starcraft range of pop-tops but there is now a new kid on the block, the Jayco Journey. It’s an apt name for a caravan, and I can’t think why someone hasn’t used it before.

Like many Jayco vans and pop-tops, the Journey is available as an Outback model but I was more than happy with the normal road-going variant, which was more than adequate for my purposes. It comes fitted with standard tandem-axle load sharing leaf spring suspension, whereas the Outback comes with Jayco’s JTECH independent suspension.

One of the differences between the Starcraft and the Journey is that while the former has aluminium cladding, the latter has a composite fibreglass exterior. It has a high-gloss finish and is designed to be both hail and dent resistant. Underneath the fibreglass is an aluminium frame that is filled with polystyrene foam for insulation with 3mm ply covering both sides. From the outside, the Journey pop-top is quite a smooth looking van, aided by the flush style of both the windows and the Camec security door. 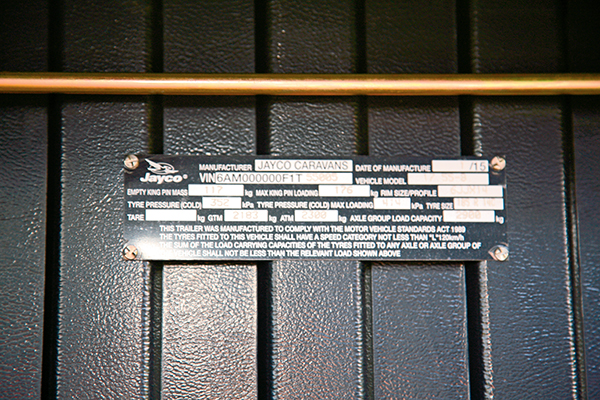 Setting up the Journey takes a little longer than a normal caravan, but it’s really only a matter of releasing the four corner clips and raising the roof from the inside, not without having to set the awning to ‘open’ first of course. With the roof raised, the awning out and the corner steadies down, we’re ready to sit back.

Up front, the island bed takes prime position. With large windows on either side and another in the front wall, there is plenty of light and cross flow ventilation. When extended, and I reckon it will have to be for most people, the bed measures 1.88x1.35m (6ft 2in x 4ft 5in). It’s okay getting around the offside corner but, given the proximity of the kitchen bench, it’s a bit of a tight fit on the nearside.

Around the front wall, the bedhead consists of the usual features – side wardrobes and overhead lockers, set slightly lower than usual allowing for the pop-top, plus bedside cabinets and a small shelf under the window. In addition to the usual reading lights, Jayco has fitted under-locker LED strip lighting for a more subtle effect. Like the rest of the van, the bed lights are controlled by Jayco’s soft touch switching.

Not necessarily a bedroom feature, but still in that area of the van, is the swivel arm fitting for the flatscreen TV that sits above the nearside corner cupboard. Thus located, it can be easily seen from either the bed or the dinette on the opposite side. In addition to the swivel arm, there are the other usual essentials – 240V powerpoint, 12V antenna connection and sound system RCA plugs.

In the cooking department, the kitchen is simply, but adequately, fitted out. It comes with a four-burner cooktop and grill, along with a stainless steel sink with drainer. There isn’t a great deal of working space but the cooktop does come with a flush lid. And with a grill instead of a full oven, there’s plenty of space for drawers and cupboards. As with the rest of the pop-top, there are overhead lockers but these are set lower than usual.

Opposite the kitchen, the dinette is fairly easy to get to from both sides but is definitely only for two people, given the minimal leg room. The single pole-mounted table is well-sized and will swivel around if needed to make getting in and out a little easier. However, given the upmarket status of the Journey, perhaps something like a Zwaardvis swivel might be more appropriate.

Instead of having reading lights fitted over the dinette, like the bed, LED strip lighting is located under the overhead lockers. Still on electrics, in the corner area next to the microwave there’s both a radio/CD player and a control panel that does everything from indicating water tank levels and battery charge levels to turning off all the electrics. It’s quite a handy device.

One of the challenges in a pop-top with a bathroom is closing off the bathroom from the rest of the van. That’s been achieved here with vinyl walls above the fixed internal walls and then simply using a curtain for the door – in many ways, much better than having a fiddly zipped-vinyl door.

Fitted into the bathroom are a nearside shower cubicle, offside cassette toilet and a rear wall vanity cabinet. To fit everything in, the cupboards and overhead lockers are narrower than usual, leaving the wash basin to overhang slightly but also making it a usable size. Given the size of the pop-top, there are a couple of compromises in the bathroom design. However, I reckon they are more than acceptable given what is available.

For a couple, the Journey offers all the contemporary caravanning features that buyers seem to like, yet it is not a heavy van at all. Indeed, it is a very good towing prospect.

Being a pop-top, there is slightly less internal storage than might be available in a conventional van, but I don’t see that as a disadvantage at all.

For those who like a bit of air space around their head, the pop-top does have some considerable advantages. And, all up, I reckon this Journey is a neat little package which will do well as Jayco’s flagship pop-top.

The full test appears in Caravan World #538 June 2015. Subscribe today for the latest caravan reviews and news every month!