‘Offroad’. It’s an often over-worked description, sometimes used a little carelessly on caravans that are barely able to deal with bad bitumen, let alone the corrugated rigours of the real outback.

However, for the past 23 years, Goldstream RV has never been accused of this misrepresentation. Enjoy a rough road or two with their Rhino variant, as we did, and you’ll appreciate why.

Sitting above the basic On-Road and Adventure Pack models – which can handle ‘bad roads’ and ‘all roads’ respectively – the Rhino was designed for customers who want to explore further and harder, and is equipped accordingly. In this respect, it even sits above the Panther Pack, which is the most aggressive offroad spec available in Goldstream RV’s pop-top models. So if you truly want to get lost, a Rhino is your van. 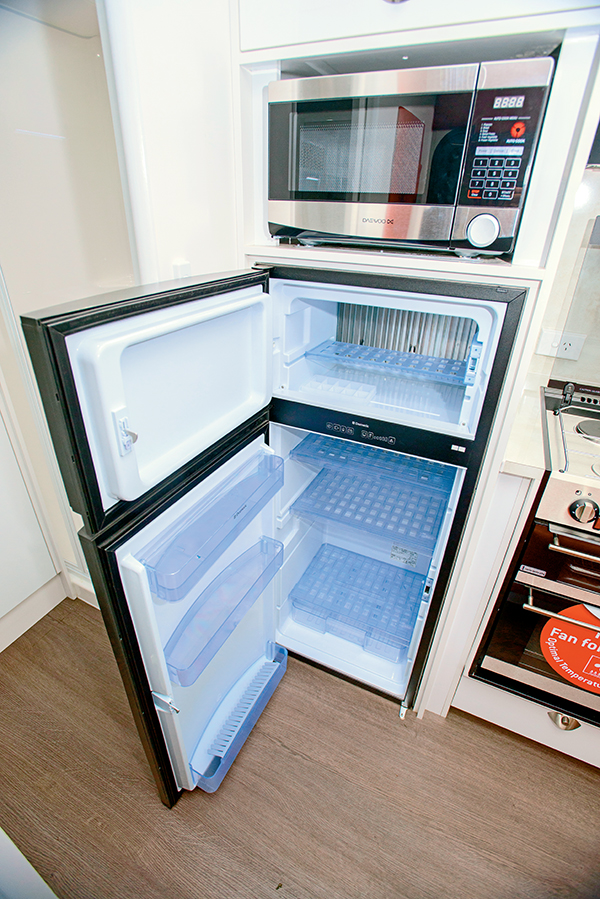 We were impressed when we first saw the Rhino at Melbourne’s Leisurefest last year, not just because of its tough, no-nonsense spec, but also because of its novel interior feature – a picture wall behind the rear-mounted, north-south island queen bed.

It costs around $1000 to have the high resolution image of your choice, perhaps from your travels, digitally printed on to the 1500x800mm glass panel, but the effect is both stunning and personal, and can also be changed periodically (for a similar cost). This feature may not be for everyone, but it looked great to me and the photo wall is an option many keen travellers are expected to take up.

The Rhino’s strength is apparent as soon as you look at its underpinnings – a beautifully finished Austrail 150x50mm DuraGal A-frame and similar diameter chassis with a Hitchmaster DO35 offroad hitch up front and a severely raked rear end for clearance in extreme conditions, such as crossing river beds.

The test van’s optional scrub bars, protecting the lower body on each side of the tandem-axle, added a further barrier that was particularly appreciated around the twin boxes housing the van’s two 105Ah deep-cycle batteries on the outer side of the main chassis members, which could otherwise be vulnerable in offroad conditions.

The kitchen on the offside wall is unexpectedly large with plenty of bench space to the right of the stainless steel sink and drainer, with room for both a grill and a fan-forced oven below the combo four-burner Thetford Caprice cooktop.

A nice touch, indicative of Goldstream’s attention to detail, is the kicker plate under the kitchen cupboards.

The 175L Thetford upright fridge/freezer to the left of the cooktop, and adjacent to the bathroom, is a great size and the Daewoo microwave above is at a sensible height. But I would expect that purchasers of this sort of caravan would prefer a 12V compressor fridge of a similar size for better cooling in tropical conditions.

On the opposite side, the cafe-style dinette, upholstered in the aforementioned plush terracotta leather, looked worthy of the test Rhino’s $94,745 price tag (including options) and the double 240V and 12V outlets above the small tri-fold table were well-placed for charging appliances.

To the left of the door and extending across the front of the Rhino, the separate toilet and shower ensuite was a little spartan and had a curious omission – no mirror above the central washbasin – something that could easily be addressed despite the sloping wall behind.

However, the top-loading NCE Eurowasher 2.5kg washing machine and full-height shower ticked the boxes on what purchasers expect in a modern caravan – no matter how far they are from civilisation.

In summary, the Goldstream RV Rhino package, with the various options fitted to the test model, gave this 6.22m (20ft 5in) caravan the ability to wear its offroad tag with pride and justification.

At its Tare weight of 2855kg, it’s a heavy beast for a full-height caravan of its dimensions.

Its $94,745 price tag, as tested, was also weighty given a base price of $76,500, but there is no denying its right to membership of the true ‘offroad’ caravan club.