I can still remember when I first visited Brisbane-based Lifestyle Camper Trailers more than a decade ago. Under the direction of a very enthusiastic John Swinglehurst, it was a very new company. There were several things that John was keen on, one was quality – think pinched weld rubber seals rather than foam – and another was staying ahead in a very competitive market.

A good example of this way of thinking has recently emerged from the Lifestyle factory. The interestingly-named Reconn Hypercamper has camper trailer origins but apart from normal items such as the awning/annexe, there isn’t any canvas to be seen.

The Reconn Hypercamper doesn’t look like a normal pop-top caravan – it doesn’t have any windows in the main body, for example – and it fits into the slightly blurry area between caravan and hard-shell hybrid camper. 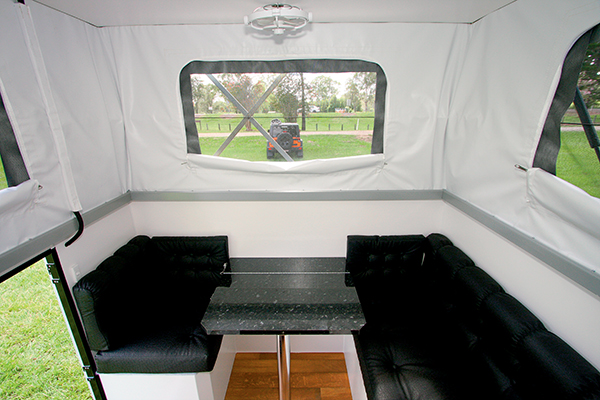 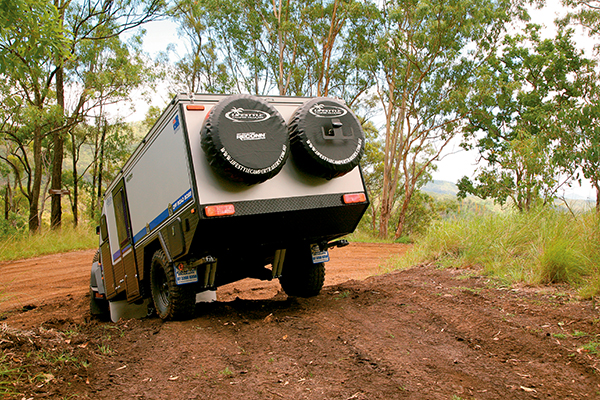 The Reconn Hypercamper has a number of external doors and they give a big clue as to how this camper is designed. For starters, there is a very large front boot with access doors on either side and across the front. Above that is a tunnel boot with doors on both sides. Then there are another two large doors on either side – the nearside one is the kitchen and the offside is a large storage space.

The latter is really the under-bed area and is a somewhat larger storage space than is found in many caravans. It’s all lined with marine carpet and lifting the ply base gives access to the house battery and water tanks. At the offside front, two other hatches house the comfort items – a Truma water heater and an external shower.

One of the more interesting features of the Hypercamper is that it takes little time to set up. Although it has camper trailer origins, it has caravan set-up times and the work largely consists of the usual items such as levelling-up once the van is unhitched and unclipping the pop-top roof so that it can be raised. It’s no trouble at all.

Inside, the Hypercamper has quite a simple but effective layout. Taking up all of the rear area is the bed, which is set at a level to make full use of the screened windows that surround it on three sides. For clambering in and out of bed, a well-sized hinged step is fitted by the entry door. It’s partially in the way of the door, but is certainly better than no step at all. You can, of course, also use the dinette seat along the offside wall to climb up.

Although my review model didn’t have one, a fridge slide-out is built into the nearside end of the front boot. It has been designed to house something like a Waeco chest fridge and is, of course, nicely located to fit in with the rest of the kitchen bench.

When Lifestyle set up for business, it was boom time for camper trailer manufacturers. In Queensland in particular, there was a large number of builders. There has been a market rationalisation since that time, but Lifestyle is still around. There are a number of reasons for that, quality being one of them, but the other being a frequent reviewing of market opportunities – this Reconn Hypercamper is a good example.

The Hypercamper is designed from experience in the camper trailer market but has plenty of ‘comfort features’ that will interest caravanners who like the offroad lifestyle but aren’t so keen on towing a large and heavy caravan.

It comes with a considerable options list but I reckon some features, such as a 240V connection, are going to be a standard request. Finally, it’s a rig that very effectively uses space for items such as the kitchen and storage. And, best of all, it’s a very keenly priced unit.