The Elddis Avante 540 Avante 540 offers a unique layout, where it offers a full-width rear bathroom, but also a rear bedroom with the bed set against the nearside wall, an offside kitchen bench and a front lounge and dining area.

The Avante 540’s cabinetry has a familiar, curved European style with a faux timber finish backed by a lightweight ply. For evening illumination, the 12V lighting is all LED and discretely placed. The van was specced out in Australia, so it comes with a roof-mounted Truma Aventa air-conditioner and also, given its British origins, a Truma Combi space heater, which isn’t a bad idea for the cooler nights that can be found in many parts of Australia. The Combi is a nice little space-saver because it doubles as the water heater and is hidden under the front offside lounge seat.

One of the characteristics of the front lounge is that it is very versatile. The lounges are 1.6m (5ft 3in) long, so there’s plenty of room for four people. For quick meals (for two), there’s a table that extends out from the island cabinet but there’s also a larger freestanding table that can be used. 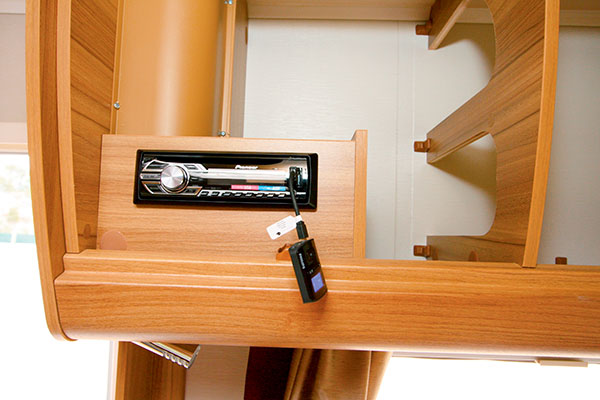 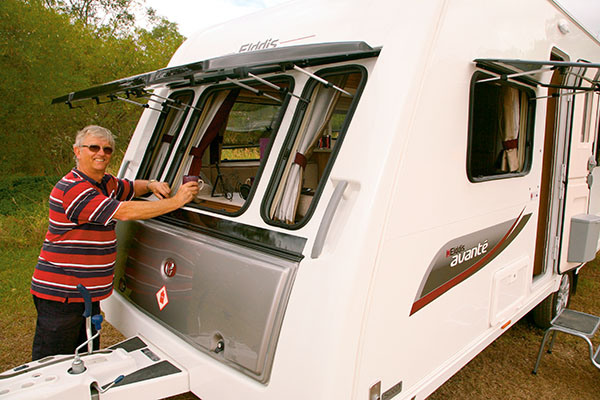 The two lounges can also be used as single beds for children, or made up into a good-sized bed of 2.08x1.6m (6ft 10in x 5ft 3in). Both the seats offer some storage underneath, which can be accessed either from floor locker doors or by lifting the seat cushions and there are, naturally, overhead lockers all around.

Measuring 1.9x1.3m (6ft 4in x 4ft 4in), the main bed is actually slightly smaller than the one at the front and is chamfered on the corner to facilitate walking past it. It comes with a couple of overhead lockers and the slatted timber base can be lifted to give easy access to the storage area underneath. By closing the concertina curtain that is tucked away beside the wardrobe, the bedroom can be closed off from the rest of the van.

The van features a circular sink, Thetford four-burner cooktop with grill and oven underneath, and an under-bench 115L Dometic fridge. That leaves only a nominal amount of benchtop working space, a couple of modest cupboards and two overhead lockers. However, a cabinet on the opposite side of the van, between the entry door and bed, adds greatly to this arrangement. It consists of a low cupboard with bench space on top, plus an overhead locker with microwave below. There are also a couple of powerpoints above the benchtop, which are useful for cooking appliances and as a charging station for devices.

Like several other items in this van, the bathroom isn’t quite rectangular but this ensures no space is wasted. The shower cubicle sits in the nearside end, leaving space for the cassette toilet and washbasin against the offside wall. It’s slightly different to a usual layout but still a workable one. Conveniently, there are two mirrors, one inside the bathroom and one just outside the door, so no steamy mirror problems.

The Avante 540’s layout is a little different to the more common ‘front bed, rear bathroom’ arrangement. That doesn’t mean it’s not a practical layout – far from it. I suspect that this will be an attraction for a number of potential purchasers.

The other attraction is, of course, the relatively light weight of the van, which does not require a heavy-duty tow vehicle. It’s not hard to imagine sitting back in that front lounge/dining area and just watching the world go by.