The Summit is a refreshed version of an existing Colorado model, with a more luxurious interior and those new wrap-over benchtops. The colour scheme is different and appealing, the windows are large and the Summit’s specification is impressive.

The caravan features a very sturdy 150mm Preston DuraGal drawbar and chassis, which incorporates an additional 50mm riser under the body of the van. Combined with the rugged Simplicity trailing arm tandem leaf spring suspension, if gives every confidence that the Summit would survive many kilometres of inland Australian travel, even laden close to its very generous 3200kg ATM.

Moving around the van, the stone mesh on the A-frame, stone-shielding for the A-frame tap, the extensive propeller-plate protection that extends to the top of the large galvanised front boot and the meaty 16in alloy wheels with their A/T tyres indicate that the Summit is prepared for some punishment. 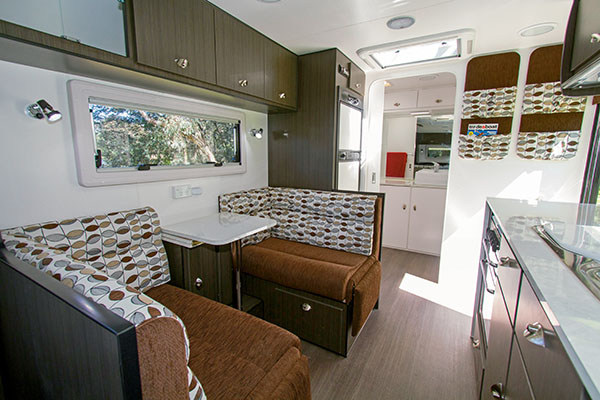 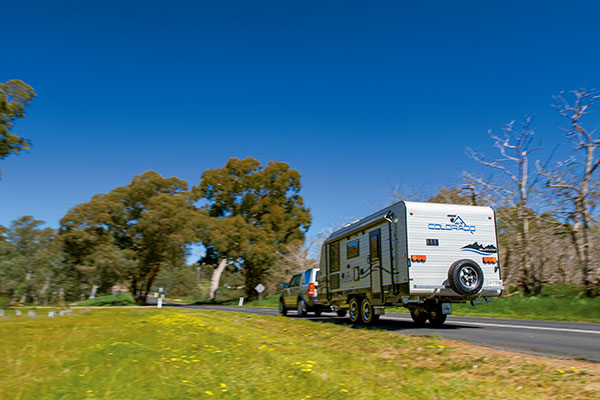 Inside, the van has a conventional but well-executed layout, with mirror-fronted robes and two large overhead timber-faced cupboards shrouding the head of the front island bed. It’s a format that Australians like and, with its angled corners, there is good room to move around the bed and to access the two partitioned storage areas beneath. Two large windows on either side of the bed plus an opening front window – all with flyscreens and block-out blinds – provide plenty of light and airflow, and this is supplemented by the Four Seasons Hatch above the bed.

The Summit’s kitchen, which extends along the nearside wall, looks particularly smart, with its benchtop extending across the lift-up cover over the Swift 500 Series cooktop, grill and oven, and down each side of the kitchen module. But there’s less bench space available than you might expect in a 19ft 6in van. There’s a Daewoo microwave too, but it’s mounted above the sink and rather high for shorter people to access easily.

The drawers, which slide out on metal runners and the overhead cupboards that line the walls above the kitchen and the café-style dinette, are notable for their full lining, giving the Summit a quality look and feel.

At the rear of the Summit, a full-width ensuite with separate shower and toilet shows plenty of thought in its design. A feature here that many travellers will appreciate is the large, frameless mirror that fills the central vanity unit.

There is also a porcelain basin with a single flick-mixer tap on the right of the bench, adjacent to the large fibreglass shower cubicle shower, with a 3kg Sphere top-loading washing machine located to the left of the basin. There are deep and handy cupboards next to the toilet on the left of the ensuite and these are roomy enough to serve as a linen press and for storing other bathroom supplies.

There is a lot to like in the Colorado Summit. This is a well-designed, hand-built caravan that is intended for long-term travel over a variety of roads.

Starting from $68,000, but priced at around $78,000 as tested, it’s not the cheapest caravan of its size out there, but it should certainly be on your shopping list if you are looking for something a little special and like the idea of working with a specialised builder to see your caravan dream come true.