What surprised me is how compact the Aurora looks, despite its 6.5m external body length and the height of its moulded all-fibreglass body shell, which is made of six separate sections and glued together using high-strength urethane.

It’s a clever visual trick, created by the caravan’s tapered, tent-like roof cap, ‘faceted’ (bent) sides and its colour scheme, with ruby red used for the lower body and a silvery-grey above, replicating AOR’s corporate colours.

Combined with the Aurora’s tapered nosecone, they create the impression of a smaller vehicle which, combined the model’s modest width of just 2.15m (7ft), allows it to be towed into tight places without mirror extensions. It also does without that top-heavy look of other narrow-bodied offroad caravans on the market. 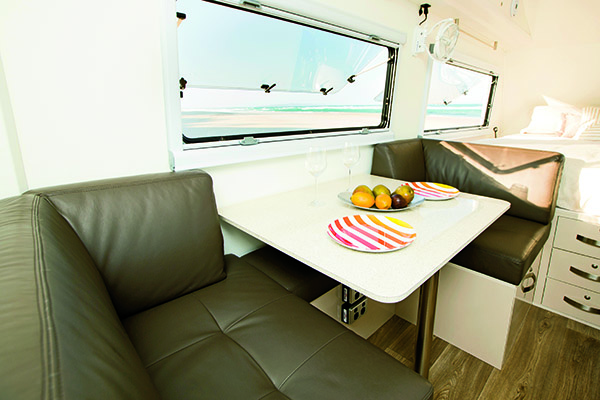 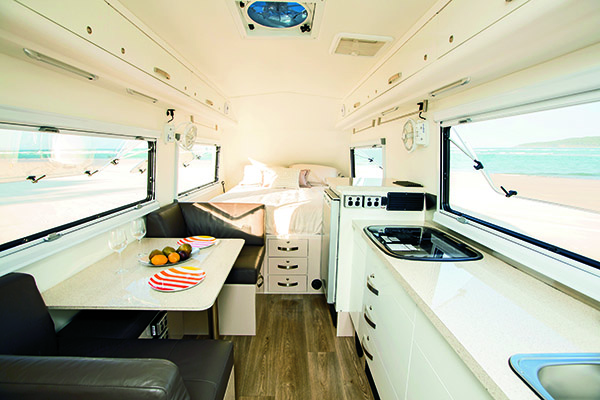 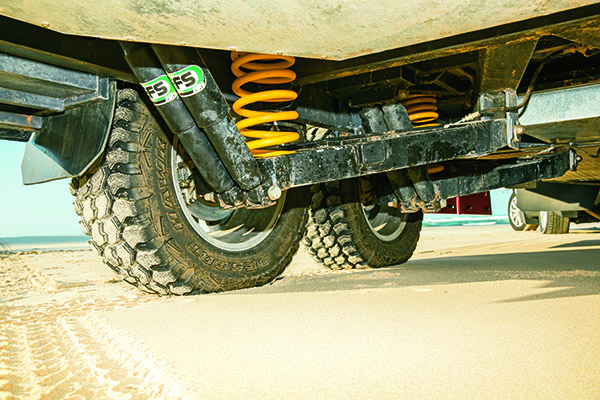 Part of the reason is that the actual wall-width, where the taper meets the roof, is just 1.9m (6ft 3in) – 50mm narrower than the smaller single-axle Matrix – so the standard 5x2.4m awning doesn’t impact on its ‘bushability’.

One casualty of the Aurora’s ‘bent’ body sides is that AOR hadn’t come up with an insect-proof fly door (at the time of writing), but Steve said the Aurora’s large windows and its layout, with a rear door and the north-south bed stuck deep into its nose, makes this less important, as the door can remain closed. However, with the kitchen almost opposite the door opening, I’m not so sure. Shutting the door when you are inside removes that sought-after ‘connected’ feeling with the environment. A sliding flywire solution would be appreciated, please! That’s the only issue I have with the Aurora’s design, which makes the most of its dimensions and is otherwise a work of art.

Inside, the Aurora is, in a word, beautiful.

Like the smaller Matrix, its walls and ceiling are covered in cream-coloured, padded marine vinyl, enhancing the interior’s ambience and making it look much larger than its actual dimensions. The Laminex-clad Nycel benchtops, brushed stainless steel door and cupboard hardware are stylish and top quality, like all other Aurora components.

The full queen-sized bed with innerspring mattress in the prototype is being shifted 200mm further forward in production Auroras, with access gained by using one cushion of the leather-clad café-dinette as a step. It’s not hard and saves space.

Being located high in the body, the top of the bed aligns with the bottom of the large flanking Aussie Traveller double-glazed windows. Ventilation on really muggy nights is supplemented by a pair of Sirocco 12V plastic-bladed, variable-speed fans.