Developed for the rough terrain/offroad market, the Kedron XC3, is a compact caravan that'll tick all your required boxes. It's equipped with all the essential items that are a must within any modern caravan and also extremely easy to tow, thanks to it's single angle chassis, as Malcom Street discusses in more detail below.

The Compact rides on a single-axle chassis and has an ATM of 2500kg, making it ideal for a wide range of tow vehicles and towing conditions. With an external body length of just 4.95m (16ft 3in), some might think the XC3 Compact would be a little cramped inside, so how does it stack up? 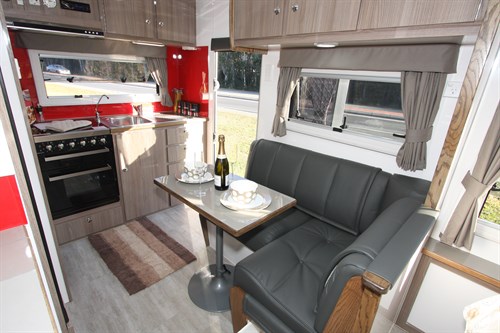 Hopping in through the rear door reveals a layout that has been used previously, and has obviously passed the test of time. A shower/toilet cubicle is built into the offside rear corner, allowing the kitchen to fill the rest of the rear wall and to spread along the offside wall as well.

This area includes a fridge and a washing machine. The bed and dinette fit comfotably within this compact arrangement but, at the same time, the Kedron XC3 doesn’t have a feeling of being closed in.

A glossy laminate – interestingly named ‘Driftwood’ – is used to finish the cabinetry, while the ceiling and walls are finished in white. The bright red of the kitchen splashback is certainly attention-grabbing. Low profile LED light fittings that have been used just about everywhere, except for the bed’s reading lights, look nice and subtle.

Features include Camec security doors, Dometic awning and tinted acrylic hopper windows. Additional stone protection is provided by alloy checkerplate one quarter of the way up the front wall and a zipped vinyl protector across the front windows.

The XC3 gets an interesting variation of the conventional front boot, with access from the front but from either side as well.

Behind the offside door, there’s a second bin that does have some spare space, but it is partially occupied by the house battery, charger, 240V circuit breakers and 12V fuses.

The intention during this review was to tryout some beach driving along Bribie Island, Qld. I have to say that both the van and the Prado tow vehicle rolled along without a hitch.

On narrow bush tracks or those that are heavily undulated, the single-axle and resultant shorter length of the Compact are certainly an asset.

I noted earlier that the XC3 Compact has an ATM of 2500kg and it’s no coincidence that it’s equal to the maximum towing capacity of the Toyota Prado. It’s that particular market, i.e., mid-sized tow vehicles, for which the Kedron team builds this van.

To my eyes, Kedron has succeeded. Sure, the Compact doesn’t have quite as much interior space as many tandem-axle caravans but its compensating feature is that it’s ideal for travellers who prefer a shorter and lighter towing combination.