In the heavily-populated world of two-berth, front bedroom/rear bathroom caravans in which we live, Jayco’s iconic Expanda caravan is a refreshing change.

The Expanda is a true caravan, it borrows some of its best features from camper trailer lore, blending the best of both worlds in a way that benefits families. And, for those not quite ready to upscale to a full-size van, the Expanda is also available as a pop-top with a Tare weight as low as 1370kg.

Flexibility is an important factor in all family decisions and Jayco has attended to this by making the Expanda available in 10 different layouts (five pop-tops and five caravans). 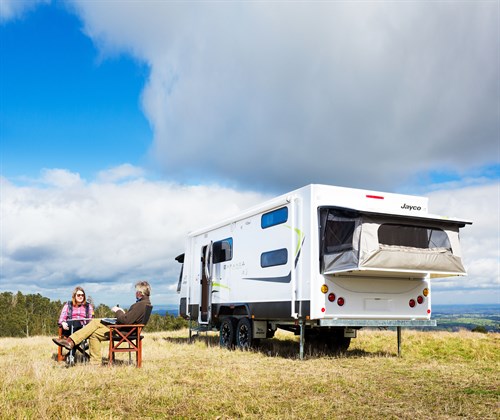 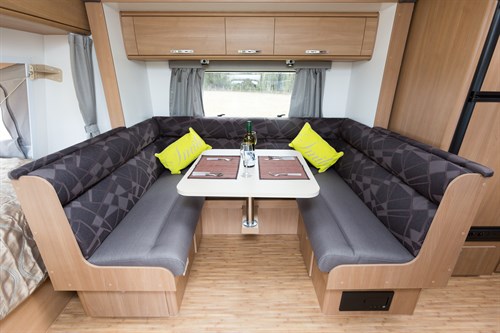 We got our hands on an Expanda Outback 21.64-1 – the largest in the fleet – fresh from Jayco HQ in Dandenong South, Vic. So fresh, in fact, that she was hot off the factory floor and about to be loaded onto a truck to the dealership when we arrived to collect her!

Weighing in at 2575kg Tare with an ATM just over 3100kg, the 21.64-1 is no lightweight and not suited to small tow vehicles. But it has all the other benefits of the classic Expanda – just in a larger package.

All packed up and on the road, the Expanda is classic Jayco – it’s impossible to mistake the clean lines of the aluminium Tough Frame sandwich panel construction and fibreglass exterior walls.

It looks like many other caravans until its front and rear fold-out panels and bunk bed windows give the game away that this is a true family van, while the high ground clearance, all-terrain tyres, and side checkerplate protection point to its rough-road intentions.

Inside, the Expanda, true to its name, opens up and out in no less than three directions, massively increasing living space and revealing an impressive and unique design.

The dinette itself is large and sumptuous, easily capable of seating four adults or two adults and four children. With its two-tone upholstery (there are eight fabric duo options and five optional leathers to choose from), and single pole-mounted table, this will definitely become the heart of the van.

Moving over to the kitchen, it’s immediately obvious this kitchen has something far too many vans do not – free benchtop space for food preparation and serving. Sure, a cover over the sink or cooktop will do the job at a pinch, but there’s nothing like the luxury of being able to spread out and cut, wash and cook all at the same time.

It was hard to pick my favourite part of this van – I’m a sucker for a club lounge; they’re so much more luxurious than stiff café-style dinettes, but I also really liked the bathroom layout, with the rear bunks opposite.

And who doesn’t love sleeping in a tent, with fresh air and views all around you – especially when it’s raised off the ground and there’s a comfortable couch, kitchen and bathroom just metres away!

For large families who want to camp together, or even grandparents with a handful of grandkids, this van has plenty of appeal.

Less obtrusive spot for microwave
Another, or a higher, entry step
Different location for switches and monitor.