Like all Kedron vans, the TopEnder has an aluminium framed and clad body and is built on a hot-dipped galvanised chassis. Although the drawbar uses 150x50mm (6x4in) rails, the actual chassis has tandem 100x50mm (4x2in) rails running the full length of the van. Protection bars are fitted along the forward side of the van. At the front of the van, external storage consists of a front boot and a three quarter tunnel boot with a slide-out generator at the other end.

Designed to Kedron requirements, the Cruisemaster independent suspension has leaf springs, trailing arms and one shock absorber per wheel. The brakes are 12in and designed with flush plugs in the event they get wet going through creek crossings. Two polyethylene 100L water tanks and a 60L drinking water tank sit between the chassis rails. On the drawbar, in addition to the gas cylinders and other common items, are two jerry can holders, an optional Fiamma bike rack and a mesh stone protector. A McHitch coupling gives the van a good deal of articulation. 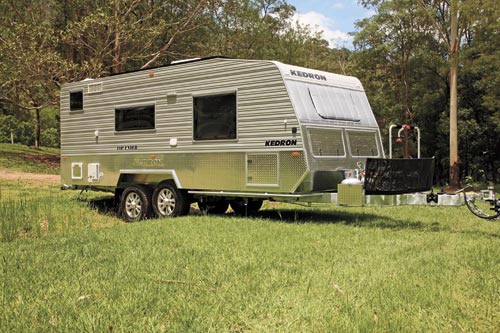 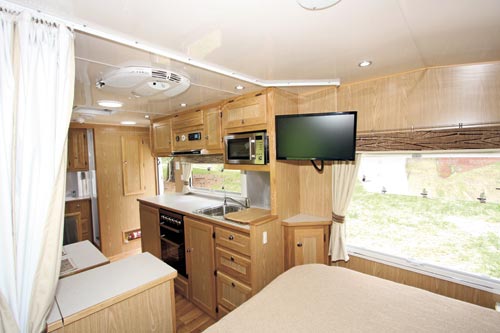 A quick look at the weight ratings – tare 2955kg and ATM 3500kg – reveals a good load capacity of 545kg, which is handy because the internal storage capacity in this front bedroom, rear bathroom TopEnder is extensive. In addition to the usual inclusions, there is a good sized cupboard between the dinette and bedroom, a large drawer under the bed and drawers under the dinette seats. A front-loading washing machine, often located in the bathroom, is fitted under the kitchen bench. This has the effect of increasing the benchtop space but reducing kitchen storage. The flipside is a slightly smaller bathroom which is still very functional.

All the essentials are present and accounted for in the kitchen – four-burner cooktop, stainless steel sink, microwave and a good-sized Waeco 215L fridge. The microwave is set lower than the surrounding overhead lockers which is a boon for shorter people. There's a moderate amount of benchtop space and general storage consists of a mixture of drawers, cupboards and overhead lockers.

On the opposite side, the leather-upholstered dinette, with tri fold table, offers all the basics for comfortable seating and dining, plus-under seat drawers and 240V and 12V sockets above the table.

At the front of the van, the bedroom has large windows do much for space perceptions, but the external storage bins take up bedside space, as well as reducing the under-bed storage area. There are still all the expected items such as the bed and wardrobes, corner cupboards at the foot of the bed and a flat screen TV mounting point above. Even with the corner cupboards, there is enough room to walk around.

Like the rest of the van, the rear bathroom has been built ready to go, including a nearside shower cubicle with non-slip floor pattern, offside cassette loo with good elbow room, a generous amount of cupboard and drawer space, and a good-sized vanity cabinet.

Kedron has put a lot of effort into equipping the TopEnder for self-contained living. Three 120Ah deep-cycle batteries supply the 12V capacity and they are charged by either a 40A mains charger, an Anderson plug connection or by three 135W solar panels.

This van is no lightweight and it will need a large tow vehicle such as a Toyota LandCruiser for both its towing capacity and driver/passenger comfort. That said, the TopEnder is a very well built van, designed for the rough stuff while, at the same time, offering a living space that allow you to rough it in the outback in comfort and style!

The full test appeared in Caravan World #524, March 2014. Subscribe today for the latest caravan reviews and news every month!