One of the latest products to come out of the Southern Cross factory is the 24ft Barcoo River Expedition, so-called because the rig has been designed to handle some of the rough stuff that Australian roads dish up. Given its ATM of 3490kg and ball weight of 560kg, the Barcoo is designed for a ute-sized tow vehicle. In this case, we towed it with a a Mazda BT-50, the current model of which has a payload of 1400kg and a GCM of 6000kg.

The fifth wheeler is designed for rough-road use and river crossing (hence the name). It has a SupaGal chassis and rides on airbag suspension, which Southern Cross tests and maintains is very rugged for outback use. They’ve done a lot of testing of the Barcoo on outback roads to make sure it all holds together well.

The Barcoo is, like many fifth wheelers, a very good tow prospect, as the hitch is over the axle, not behind it. Southern Cross has broken with fifth wheeler tradition and has used a ball coupling to hitch the RV to the ute instead of the more common turntable hitch used for most fifth wheelers. 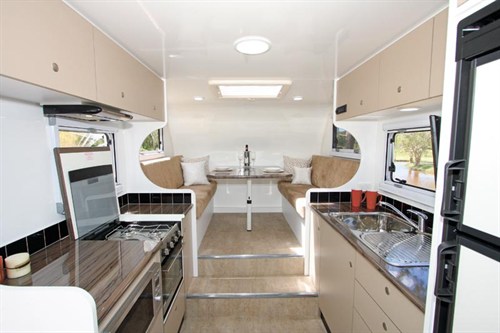 Generally speaking, the interior has a very spacious feel about it. That’s due to several things, the first being the relatively open layout. Light and bright colours, especially the glossy ceiling is the second, and the third is large windows throughout. By night, the assorted LED light fittings keep things very bright as well.

With its head against the nearside wall, the innerspring mattress bed measures 1.93x1.52m (6ft 4in x 5ft). Large windows on both sides give good cross flow ventilation. A benefit of an east-west bed is that there is often room for a well set-up bedhead storage area. Bedside wardrobes and cabinets are fitted on both sides and split so there is a good shelf in between. There are also two overhead lockers and a four-door full-height cupboard against the offside bathroom wall.

Like any large contemporary RV, the Barcoo has a full-width rear bathroom. A shower cubicle fits into the offside corner, a Thetford cassette toilet is located on the opposite side, and there’s a top-loading washing machine fitted into the rear corner. Even with those items, the bathroom design is deep enough to accommodate a vanity unit with wash basin and cupboard across the rear wall. Other inclusions are towel rails and a wall mirror. Ventilation comes courtesy of a fan above the shower cubicle and a window above the loo.

The kitchen is located amidships, between the dinette and bedroom. The dinette is two steps above floor level but there is still plenty of head room (1.64m/5ft 4in) and four people can be seated without too much trouble. There are windows on both sides, and the only downside is that you can’t see out the front. With this arrangement, the kitchen more or less flows into the dinette and it is quite large by contemporary standards.

There are kitchen benches on both sides –the nearside one has a Thetford Triplex cooktop oven/grill and an under-bench microwave oven. That leaves room for a bit of bench space, drawers, cupboards and overhead lockers. On the other side, the stainless steel sink is surrounded by cupboards, multiple drawers, overhead lockers and even more bench space. At the rear end of the bench is a 175L Waeco compressor fridge.

The Barcoo River Expedition is a slightly unconventional fifth wheeler but that certainly does not detract from its drive ability or liveability. There are a number of extras fitted to this rig which adds about $4300 to the base price. Some of those, such as the solar panels, are highly desirable features if you’re considering remote camping. The end result, if your desire is to spend time exploring the back blocks of Australia, is a very well-appointed fifth wheeler with an open and user-friendly layout.