In some ways the team at Kedron Caravans is quite a conservative bunch. Sure, there’s nothing conservative about their outback travels but, like a number of other manufacturers, the range of Kedron caravans is relatively small. Not that there's anything wrong with that – in fact, I suspect the main reason is to ensure quality not quantity.

The new Kedron XC3 Compact is based on an existing van, the XC3 Cross Country. It weighs in at 1975kg, a very good weight for an offroad caravan and ideal for smaller tow vehicles or much less work for larger ones. It’s only 5m (16ft 4in) long, which is good for some of those undulating bush tracks the Kedron team likes to travel along.

CONSTRUCTION AND OFF ROAD ABILITY

The Compact is built much like any other Kedron in many respects. It's based on a hot-dipped galvanised box section chassis with 150mm/6in main rails. For the rough stuff, the Compact rides on trailing arm coil spring suspension fitted with dual shock absorbers. Up front, a 3500kg McHitch coupling keeps the van well and truly on the tow ball. Fitted between the chassis rails are two water tanks – 100L for everyday use and 60L for drinking. 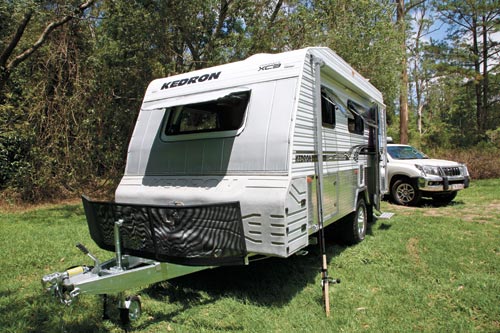 An aluminium interlocked frame with high tensile steel rivets is used to keep the body rigid, except in the roof where the frame is welded. It has all the usual features such as the Camec security doors and tinted acrylic hopper windows, as well as two 9kg gas cylinders and a mesh stone protector on the drawbar.

What's very new on this van is the roto-moulded poly front boot, which uses exactly the same material as the water tanks, so you know it's tried and tested. It's designed to be both dust and waterproof, as well as resistant to stone damage. That creates enough external storage space, even without the second bin on the nearside – which is lucky, because that’s really just for the Weber barbecue. On the nearside are some common al-fresco items – the awning and entertainment unit, complete with flatscreen TV mounting bracket. Doing away with common convention, the battery, charger, 12V fuse panel and solar panel regulator are located in a small offside compartment rather than in the front boot. Maybe it's a bit geeky, but I think I'd prefer to have the solar panel regulator inside the van where I can easily see what is going on with the batteries.

Up front, there's an east-west bed, set high enough to leave storage space underneath for items such as the hot water heater and your larger travelling essentials.

Given the more confined interior space, the timber finish tends to dominate. It’s very nicely done, and is finished in a light American Oak. All the door catches are marine style and reasonably easy to operate with stiff fingers. Round LED lights supply the necessary illumination but there are reading lights above the bed and a strip light in the kitchen.

Across the front, the bed measures 1.8x1.4m (6ft 2in x 4ft 6in), has windows on three sides and a row of overhead lockers across the front. There are no bedside shelves as such, although there is a cabinet adjoining the bed. Below the bed base, the floor level door gives access to the under-bed storage area. It's a bit hard to fit a large wardrobe into a van this size but, between the bed and the dinette, the cabinet has hanging space above and three drawers below, offering a relatively generous amount of storage space.

In a van of this length, you'd generally expect to find a compact bathroom, with a combined shower and toilet in the same cubicle. However, a little bit of deft planning has resulted in a bathroom that is long enough to have a separate shower cubicle which also contains a small corner wash basin. Outside the shower cubicle, the cassette toilet sits by itself with a large wall mirror above. About the only problem with this arrangement is that it’s not very easy to use the wash basin and mirror, say for shaving, at the same time. But alloy checkerplate on the floor creates a non-slip surface that is easy to clean.

Clad in nautical blue upholstery, the cafe dinette has been neatly designed to seat just two people. The rear seat is 150mm narrower that the front seat, in order to create a bit more aisle space, given the proximity of the kitchen. Both seats have drawers underneath and there are overhead lockers as well. Above the tri-fold table, there's a 240V outlet, but I reckon that, given this is a van designed for remote camping, a 12V outlet or even a 5V USB socket would not go astray.

Generally speaking, RV kitchen benches have to long enough to fit a four-burner cooktop/grill/oven alongside a stainless steel sink and drainer. There are other variations, but that is the most practical, and Kedron has managed to craft just that along the rear wall. Both tank water and filtered drinking water are supplied to the sink and the brushed stainless steel splashback is a mounting point for powerpoints, light switches and the Suburban hot water control. Naturally, there's a full complement of cupboards, drawers and overhead lockers.

On the road the Compact is a snack to tow and very well-behaved. Given it's relatively short length and light weight (tare less than 2000kg), it's perfect for exploring many a bush track. Hitched up behind something like a Toyota Prado, offroad touring is going to be a breeze. Although the van’s layout is a bit compressed due to its size, what Kedron has managed to fit in, with very few compromises, is really impressive. I reckon it's a very livable proposition and is ideal for someone who doesn't want a large van dragging along behind them.