Well-known motorhome Avida (formerly Winnebago) has recently started building and selling caravans. It has developed a range of on-road caravans, as well as vans for what Avida calls multi-terrain (i.e., rough road) touring.

This just my opinion, but when a manufacturer is trying to break into the existing caravan market, I think one of the keys is to build a van that looks different to everyone elses. Which leads to the question: has Avida managed to achieve this? 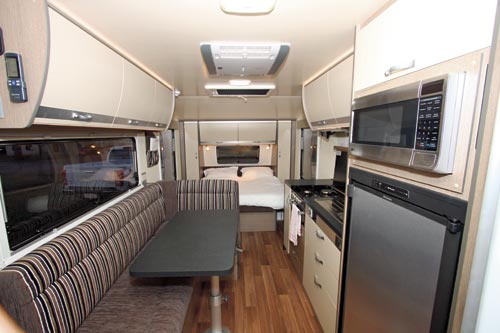 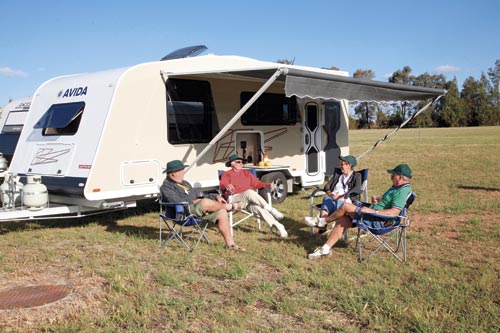 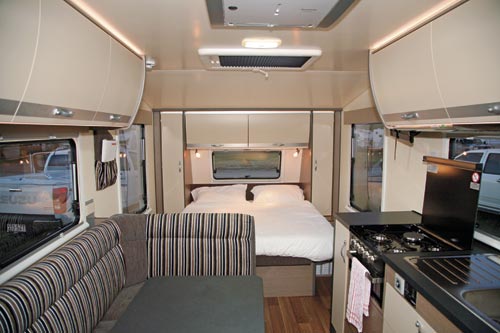 A look under the Sapphire reveals a remarkably tidy chassis riding on Al-Ko Rocker-Roller suspension. DuraGal 6in RHS is used for the main rails, with 4in RHS for the drawbar rails. However, there are considerably less cross members than usual in order to cut down on the van’s overall weight. Instead, a one-piece 45mm sandwich panel floor with protective aluminium lining on the underside is used to enhance the strength factor.

Similarly, both the walls (35mm) and roof (45mm) are one-piece items, also made using sandwich panel construction with no frame. The idea is to retain strength without a weight penalty.

While there are a good variety of layouts available in Avida’s caravan range, most of them are variants of the front bedroom/full-width bathroom arrangement. The exception is the family vans, which have bunks across the rear and a much smaller bathroom. This Sapphire, I believe, scored the layout of choice – island bed front bedroom, full-width rear bathroom, offside kitchen and nearside dinette.

The Sapphire kitchen contains all the things you’ll need to whip up delicious camp meals: a four-burner cooktop/grill, stainless steel sink with drainer, and 150L fridge with microwave above. The latter is at a reasonable height but that’s mostly because the fridge is a bit smaller than the more common 186L two-door model. Bench space is on the moderate side but there’s a good selection of drawers, overhead lockers and, between the fridge and bathroom, several wire basket slide-outs.

In the rear, the bathroom isn’t rectangular in shape as it’s narrower on the nearside to accommodate the shower cubicle and wider on the offside to accommodate the Thetford cassette toilet and the top-loading washing machine tucked into the rear corner. That leaves room for two lockers above the loo and a decent vanity cabinet with a two-door cupboard, a nice set of shelves above and below, a large wall mirror and a small washbasin.

Inside, the large windows means it’s a bit like living in a fish bowl, but the integrated blinds create a bit more privacy if required. The interior colour scheme is beige with various shades of brown but, if it’s not your preference, there are plenty of options available. Lighting, like in many contemporary RVs, is all LED, with mostly conventional fittings but also a good use of concealed strip lights.

The cabinetry is a mixture of styles, mostly finished in vinyl plywood, with square edges for the kitchen bench and part of the bedroom, and curves for everything else.

On the weighbridge, the Sapphire comes up with a tare weight of 2280kg and a ball weight of 120kg – that’s with both gas cylinders and water tanks just about full. With an ATM of 3200kg, there is certainly very good load capacity on offer, but if you resist the temptation to fully load the van, then a good variety of tow vehicles can be used.

Indeed, my Isuzu D-Max ute, with the Sapphire on the back, handled the mountains and flats of the run to Mudgee without a problem. About the only issue was when large trucks approached at speed from behind me on the freeway – the so-called ‘bow wave’ effect could sometimes be felt.

The question remains: has Avida managed to build a caravan that’s different from the herd? The short answer is yes.

It’s clear Avida has taken some trouble with the construction of its chassis and the general look of the van, both inside and out. All up, as a new entrant, it’s quite a worthy contender in the caravan market.